Egypt is boosting ties with the Nile Basin countries while Ethiopia inches toward the third filling of the Grand Ethiopian Renaissance Dam without an agreement with the downstream countries. 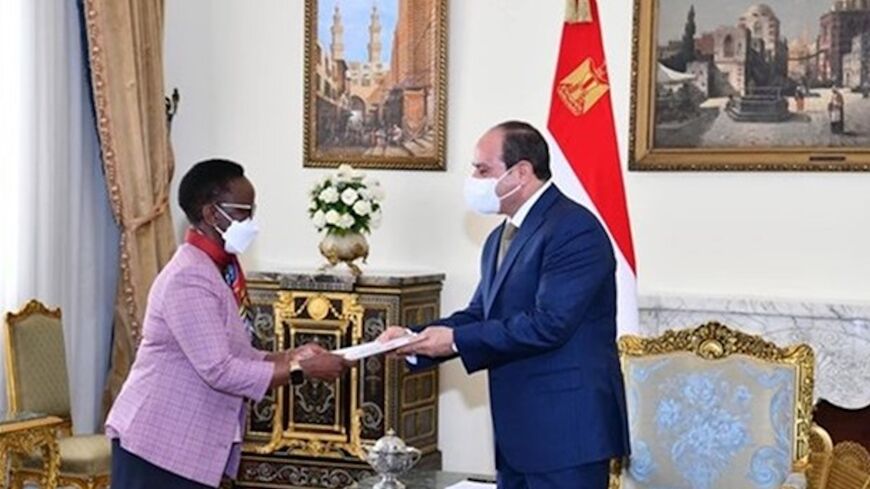 During the meeting, Sisi expressed Egypt's pride in the deep-rooted ties with Tanzania that have grown stronger in recent years and the activation of joint cooperation mechanisms in various fields.

For her part, Mulamula conveyed a written message to Sisi from Tanzanian President Samia Hassan, reiterating her country’s great appreciation for the profound relations with Egypt. Hassan also expressed in her message her country’s keenness to upgrade the frameworks of bilateral cooperation and to leverage Egypt’s broad experience in the field of mega development projects.

Moreover, Hassan’s letter referred to the joint cooperation with Egypt on the establishment of the Julius Nyerere Dam to generate hydroelectric power in Tanzania.

At a press conference with her Egyptian counterpart Shoukry, Mulamula said, “Tanzania is seeking to explore new horizons of cooperation with Egypt, especially in agriculture, energy and information technology.”

She added, “We have a surplus of agricultural land, but we need Egypt’s support to develop it and achieve added value.”

In this context, Ayman Samir, an expert on international affairs and editor-in-chief of the local Egyptian Politics newspaper, told Al-Monitor that Egypt's policy toward Africa has radically changed with Sisi's ascent to power. “Africa seems to have regained its spot in Egyptian foreign policy,” he said.

Samir continued, “According to [Egypt’s] State Information Service, 33% of the total foreign visits of Sisi until mid-2021 were to the African continent. Egypt also represented the continent in international meetings such as in the United Nations and in regional meetings such as in Asia and Europe. Egypt has special relations with the Nile Basin countries, including Tanzania. Egyptian-African relations may have been strained a little during the era of former President Hosni Mubarak, but they have regained strength in the past few years amid the convergence of political and economic agendas between Egypt and some African countries such as Sudan.”

Samir added that Egypt is always looking for new areas for cooperation with African countries. “Agriculture in Tanzania seems to be one of the cooperation prospects, in addition to meat imports.”

He further noted that “the investment risk insurance fund, established in September 2019, encouraged the Egyptian private sector to invest more in the African continent and helped strengthen and deepen relations with African nations, while investors were previously reluctant to go to Africa.”

During their meeting, Mulamula and Sisi also discussed the Grand Ethiopian Renaissance Dam (GERD) crisis. Sisi stressed Egypt's firm position on preserving its water security and historical rights to the Nile waters, through a binding and legal agreement on the rules for filling and operating the dam.

In turn, Mulamula expressed her understanding of the importance of this issue for Egypt.

“The majority of African countries are siding with Egypt over the GERD,” Samir said. “We respect Ethiopia's right to development in exchange for guaranteeing our share of water. Cementing Egyptian-African relations falls within the scope of Egypt’s efforts to solve the GERD crisis, especially since the only path to a solution is under the umbrella of the African Union (AU).”

He stressed that Egypt does not view the relationship with African countries only from the angle of the water issue, but rather from a broader perspective of mutual benefit.

Mulamula’s visit comes in light of the deadlock in the decadelong dispute over the GERD. It also falls in tandem with Ethiopia gearing up for the third filling of the dam in August without reaching a binding, legal agreement on the dam’s operation and management with Egypt and Sudan.

For these two downstream countries, the GERD is a threat to their water resources from the Nile River, on which they depend almost entirely to meet their drinking and agricultural needs. Ethiopia, for its part, believes the GERD is a means to achieve development.

Hiba al-Bashbishi, a professor of political science at the Institute of African Studies and Research at Cairo University, praised any Egyptian steps to boost ties with African countries in light of the GERD crisis.

She told Al-Monitor, “It is important to consolidate relations with Tanzania, being one of the Nile Basin countries, with shared borders with more than one African country. Egypt is offering its support to Tanzania’s Julius Nyerere Dam project. This is why Tanzania will most probably follow Sudan’s suit in backing any diplomatic decision taken by Egypt on the GERD.”

Bashbishi added, “Egypt is trying to form a front in Africa that defends its viewpoint regarding the GERD within the AU. Fostering ties with African countries will allow Egypt to seek the mediation of these countries in solving the GERD crisis. This is an opportunity that Egypt cannot miss.”