Algeria has become a party in the Grand Ethiopian Renaissance Dam crisis after consenting to assume a mediation role to resolve the dispute between Egypt, Sudan and Ethiopia, which experts count on to peddle the wheel of the negotiations. 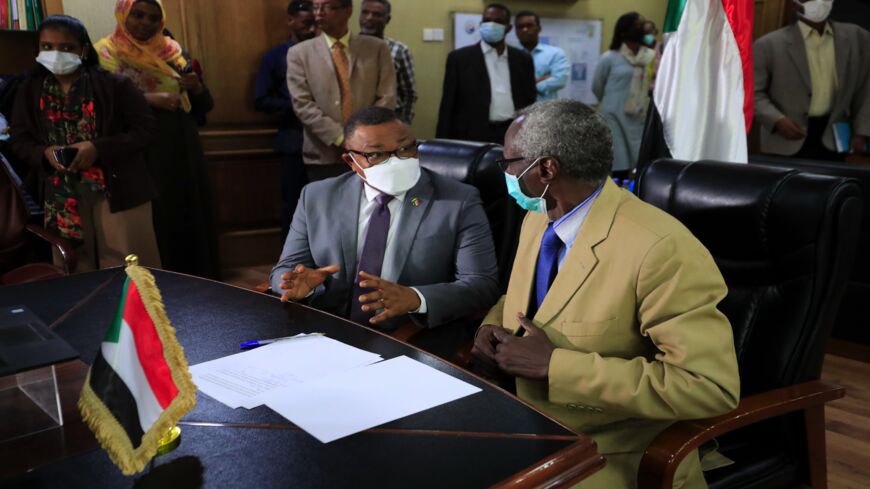 Sudan's Minister of Irrigation and Water Resources Yasser Abbas (R) and Minister for Foreign Affairs Omar Gamar al-Din are pictured during a video conference meeting with their Egyptian and Ethiopian counterparts to discuss future steps in Grand Ethiopian Renaissance Dam (GERD) negotiations, in the capital, Khartoum, on Jan. 10, 2021. - ASHRAF SHAZLY/AFP via Getty Images

CAIRO — Algeria has now joined the Grand Ethiopian Renaissance Dam (GERD) dossier, following an Ethiopian invitation on July 29 calling on Algeria to assume a constructive role in rectifying “misconceptions” of the Arab League about the Ethiopian position on the GERD.

Algerian Foreign Minister Ramtane Lamamra began on July 28 an African tour, including Tunisia, Ethiopia and Sudan, during which he met with several officials. He also met his Egyptian counterpart, Sameh Shoukry, in Cairo on July 31 to discuss bilateral relations and the GERD crisis.

Following a meeting between Lamamra and head of the Sudanese Sovereign Council Lt. Gen. Abdel Fattah al-Burhan, Sudan welcomed on July 31 the Algerian initiative to resolve the dispute over the GERD between Egypt, Sudan and Ethiopia.

A statement by Sudan’s Transitional Sovereignty Council issued July 31 explained that the initiative requires “the three countries hold a direct meeting to solve differences over the GERD.”

The Algerian initiative is in line with Article 10 of the Agreement on the Declaration of Principles, which the concerned countries signed in Khartoum on March 23, 2015.

In this context, Tarek Fahmy, a political science professor at Cairo University, told Al-Monitor by phone, “Lamamra’s visit to the three disputing countries is part of [Algeria’s] efforts to break the deadlock in the GERD negotiations in the absence of a clear vision by the Democratic Republic of the Congo during the last negotiations round.”

Fahmy indicated that Algeria is an important country in the region with presence and credibility in the African Union (AU), and it has a direct influence on all parties due to its good relations with all three conflicting countries. Therefore, it has a lot to offer in this regard, particularly since all parties agreed on the mediation, he added.

Negotiations over the GERD have been locked in a stalemate since the last negotiations round held in Kinshasa, the current AU chair, on April 6. The three countries failed to reach common ground on the operation and filling of the GERD.

Over the course of the previous rounds, Cairo and Khartoum insisted on reaching a binding agreement before the second filling of the GERD. Ethiopia repeatedly reassured the downstream countries (Egypt and Sudan) that its national project would not cause them any harm.

Fahmy said that Algeria has good relations with the European Union as well. Egypt had already explained its own vision on the GERD crisis to the European body, he added.

Fahmy believes the AU will play an increased role in the crisis in the future by pushing countries, including Algeria, to assume a role. He also expects Egypt to submit, again, the GERD file to the UN Security Council to remind the public opinion that the file has yet to be solved.

On July 8, the UN Security Council convened to discuss the GERD crisis following an Egyptian letter calling on the council to examine the case on July 1. Following the meeting, the 15 member states of the Security Council said there is a need to resume negotiations under AU auspices in order to reach a tripartite agreement and de-escalate the situation between the three countries.

However, tension has already escalated between the three countries after Addis Ababa announced on July 6 the second filling of the dam, which Cairo and Khartoum rejected.

Rakha Hassan, a member of the Egyptian Council for Foreign Affairs, told Al-Monitor by phone that Algeria is a key African country with a presence in the AU. Lamamra has a distinguished personality and long political experience, which makes it more likely for him to succeed in ending the deadlock, he added.

Hassan indicated that convening this summit would be a very important step for the negotiation process so as to reach a legal agreement that is satisfactory to all parties.

Hiba al-Bashbishi, a researcher at Cairo University, told Al-Monitor by phone that Algeria has the ability to correctly communicate Arab terms and ideas to African countries considering its good and balanced relations with Arabs and Africans alike.

She added that Algeria’s experience, some of which was gained from its mediation in the Eritrean-Ethiopian crisis, will help convey the Egyptian concerns over the dam and Ethiopia’s concerns over a binding agreement, which it perceives as a pressure tool.

Egypt, which already suffers from water scarcity, fears that the GERD will reduce its share of the Nile water, amounting to about 55.5 billion cubic meters. Ethiopia, an upstream country, began building the dam in 2011 on the Blue Nile in an area located on the Ethiopian-Sudanese border at an estimated cost of about $4.6 billion dollars and at a maximum capacity of 74 billion cubic meters. The dam would reduce alluvium, which would have an impact on agriculture in Sudan. Also, the lower water level would affect fishery resources. Yet Ethiopia stresses the importance and necessity of the GERD for its economic development, as it would generate 6,000 megawatts of electricity.

Bashbishi stated that “Egypt could not properly express its concerns before the international community, which, hopefully, Algeria will do. If the Algerian initiative succeeds in conveying mutual concerns between the three countries, I think that the negotiations will move to the next stage.”