After the tripartite negotiations between Egypt, Ethiopia and Sudan reached a dead end, Egypt and Sudan turned to the UN Security Council to resolve the crisis. 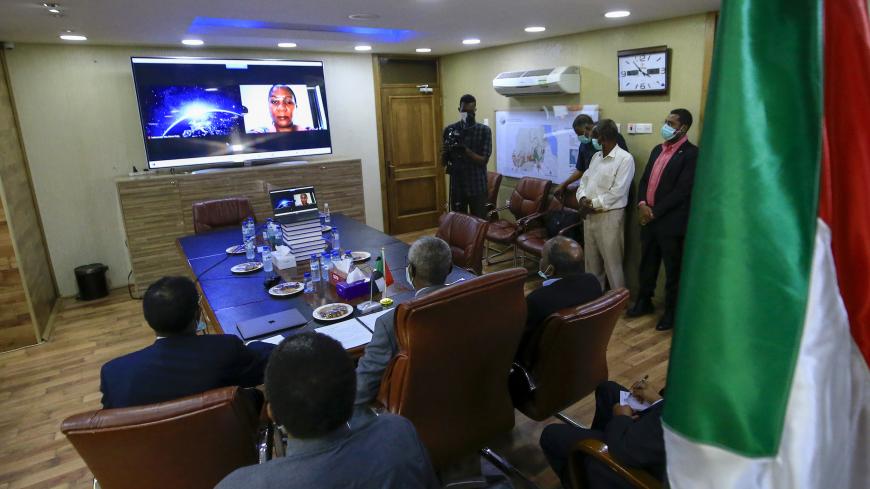 Sudan's Minister of Irrigation and Water Resources Yasir Mohamed takes part in a video meeting at the ministry in Khartoum on June 9, 2020, over the Grand Ethiopian Renaissance Dam. - ASHRAF SHAZLY/AFP via Getty Images

CAIRO — In a letter submitted to the UN Security Council on June 26, Sudan called on the world body to “discourage all parties relevant to the Grand Ethiopian Renaissance Dam (GERD) from taking any unilateral action, including the filling of the dam’s reservoir, before reaching an agreement.”

The Sudanese plea came after Egypt asked the Security Council June 19 to intervene in the GERD dispute and support the tripartite negotiations to reach a fair solution to the crisis after talks had stalled June 12.

The UN Security Council met June 29 to discuss the issue in the presence of representatives of Egypt, Sudan and Ethiopia. Ethiopia's UN Ambassador Taye Atskeselassie Made argued that the issue should not be addressed by the Security Council, saying that after being denied the use of its resources, Addis Ababa seeks to utilize them in a rational way and that the dispute is the domain of the African Union.

Egyptian Foreign Minister Sameh Shoukry said that the dam endangers the lives of more than 150 million Egyptians and Sudanese, and that if disaster strikes, the Sudanese as well as the Egyptians will face great danger. He warned that Egypt will not allow any threat to its water security.

Sudan’s representative to the UN, Omar al-Sadiq, said that Sudan is against any unilateral action to fill the GERD before the three countries reach an agreement, as such step would harm both Egypt and Sudan. He added that the Nile River is a joint property and that “reaching an agreement before the filling is very important so as to avoid any damage to millions of people.”

On June 12, Egypt and Sudan expressed reservations about a document put forward by Ethiopia at their third round of tripartite talks on the GERD, held upon the initiative of Sudan. The document includes Ethiopia’s vision on the filling and operation mechanisms.

Muhammad Hegazy, a former Egyptian assistant foreign minister, told Al-Monitor that Sudan convened consultations after Ethiopia suddenly withdrew from the negotiation round held in Washington Feb. 26. He added that although the consultations were not successful, credit should be given to Sudan for its efforts.

Hegazy stressed that Sudan's position, as a downstream country, aligns with the Egyptian position. He said, “The terms, the way the crisis is presented and the languages may differ, but the meaning and content are the same. We are both against proceeding to an initial filling in the absence of an agreement with the two downstream countries, and we both have concerns about the studies relating to the safety of the dam, which are yet to be completed.”

In a June 27 article for Al-Arab, Egyptian journalist Mohammad Abu al-Fadel wrote, “The Sudanese letter to the UN Security Council shows that Khartoum's position has aligned with Egypt's in that it is against filling the dam prior to reaching an agreement. Sudan is expressing support for the diplomatic Egyptian approach in resolving the dispute.”

Abu al-Fadel indicated that the Sudanese letter articulates a departure from Ethiopia's. He explained, “Cairo is betting on Khartoum’s position that goes in line with the Egyptian one regarding the filling, in case the dossier either continued to be raised in the UN corridors or [the parties] returned to negotiations. Egypt is no longer singing alone or being accused of encroachment on Ethiopia or preventing Ethiopia from overcoming poverty and darkness.”

Former Egyptian Minister of Water Resources and Irrigation Mohamed Nasr Eddin Allam told Al-Monitor over the phone that Sudan is still defending its rights, if timidly. He noted that had Sudan been firmer in stressing its rights in the past talks and negotiations, its starting position would have been stronger.

In a June 16 article for Independent Arabia, Amani al-Taweel, director of the African program at Al-Ahram Center for Political and Strategic Studies, said that there are signs of a shift in the Sudanese position on the GERD from that held under the rule of ousted President Omar al-Bashir. Taweel added, “It might be an insufficient position that is only seeking a regional balance and a limited agreement that may neglect the main risks facing Sudan in particular.”

She continued, “Although the dam poses a great danger to Sudan, given the huge water storage volume in the dam’s lake and the fact that the dam is adjacent to the Sudanese border, thus putting Sudan under the threat of a potential collapse of the dam after filling the lake, Sudan seems totally absent at the official level.”

Sky News Arabia reported that Shoukry said June 30, “Sudan will primarily bear the potential risks of the dam, due to its proximity, [but] Egypt will as well. The Egyptian coordination with Sudan on the GERD aims to reach a balanced and just agreement that does not harm the two downstream countries.”

Egypt, which already suffers from water scarcity, fears that the GERD will affect its share of the Nile waters, about 55.5 billion cubic meters. The GERD, which Ethiopia began building in 2011 on the Ethiopian-Sudanese border at an estimated cost of $4.6 billion and a capacity of 74 billion cubic meters, affects Sudan's fisheries and agriculture. Ethiopia insists that the dam is necessary for its economic development, as it supplies Addis Ababa and some of its neighboring countries with large amounts of electricity.