As yet another round of negotiations falters between Egypt, Sudan and Ethiopia over the Grand Ethiopian Renaissance Dam, Addis Ababa announced the beginning of construction of a new smaller dam on the Blue Nile Basin. 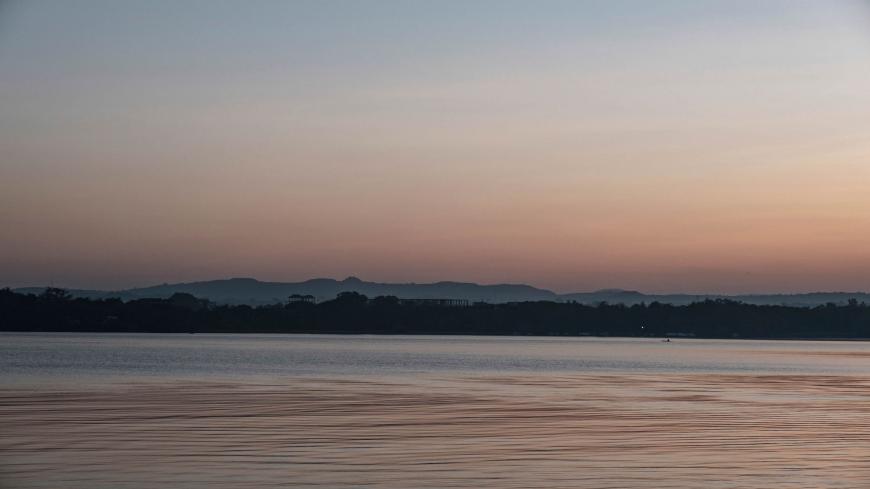 A fisherman is pictured in his boat on Lake Tana, a UNESCO biosphere reserve that is the origin of the Blue Nile River that feeds the Grand Ethiopian Renaissance Dam, in the city of Bahir Dar, Ethiopia, Nov. 11, 2020. - Eduardo Soteras/AFP via Getty Images)

CAIRO — Ethiopia’s Minister of Water and Irrigation Seleshi Bekele Awulachew announced Jan. 9 that the foundation stone of a new dam was laid on the Agma River, a small river in the Blue Nile Basin, in the Amhara Region, north of the capital Addis Ababa.

According to a report by Sky News Arabia quoting the Ethiopian Broadcasting Corporation, the dam, dubbed Agma-Shasha, will be built in northern Shewa in the Amhara Region, and will be 45.5 meters (149 feet) high and 371 meters (1,217 feet) long, with a storage capacity of up to 55 million cubic meters.

Ethiopia is scheduled to finish construction within three years, at an estimated cost of $125 million. The project will allow it to develop 7,000 hectares (17,300 acres) of land, which would benefit 28,000 families.

The dam’s construction will be implemented by the China Civil Engineering Construction Corporation in cooperation with the Amhara Water Work Construction Enterprise.

This comes at a time when the negotiations on the Grand Ethiopian Renaissance Dam (GERD) are stalling between Egypt, Sudan and Ethiopia. The latest round of talks was held on Jan. 10 and came to a halt, this time, over disagreements over how to resume negotiations and the procedural aspects of managing the negotiation process.

Mohamed Nasr Allam, a former Egyptian minister of water resources, told Al-Monitor via phone, “The Agma-Shasha dam that Ethiopia is preparing to build is a small dam and does not affect Egypt’s share of the Blue Nile water.”

Allam criticized Ethiopia’s decision to start building the dam without notifying Egypt and Sudan, explaining that the 1997 United Nations Convention on the Law of the Non-Navigational Uses of International Watercourses states that any country seeking to construct a dam must notify in advance the co-riparian states and even obtain their approval before taking any steps on the ground.

Commenting on the timing of the project, Allam said that announcing this project in light of the faltering GERD negotiations “is nothing but bad propaganda to raise questions and confusion among the Egyptian public opinion about the impact of the new dam on Egypt’s water share.”

The two downstream countries — Sudan and Egypt — have been striving, since the construction of the GERD in 2011, to reach a legally binding agreement with Ethiopia — an upstream country — through negotiations on the filling and operating of the dam, within the framework of the Declaration of Principles between the three parties signed on March 23, 2015, in Khartoum.

The agreement stipulated for the fair, equitable and appropriate use of the Nile’s water amid regional cooperation and integration. The GERD raises the concerns of Egypt and Sudan about affecting their water shares.

Egypt, which suffers from water scarcity, fears a decrease in its share in the Nile water amounting to some 55.5 billion cubic meters, as a result of operating the GERD, which Addis Ababa began building in 2011 on the Blue Nile in an area located on the Ethiopian-Sudanese border, at an estimated cost of about $4.6 billion, with a maximum capacity of 74 billion cubic meters.

The dam might also affect agriculture in Sudan by retaining silt and decreasing the water level that will impact fisheries.

Ethiopia, for its part, assures that the dam is necessary for the country’s development as it provides Addis Ababa and neighboring countries with large quantities of electricity.

“The Ethiopian Agma-Shasha dam has a limited capacity. It is true that it is being built on a tributary of the Blue Nile, but it will not affect Egypt’s water share,” Abbas Sharaqi, a professor of biology and water resources at Cairo University, told Al-Monitor.

He said that these small dams, however, do not require prior notice to the Blue Nile countries, as they are considered a local project, serving irrigation and not electricity generation, unlike massive dams that withhold large quantities of water such as the GERD.

Sharaqi ruled out that there is any correlation between the timing of Addis Ababa’s announcement and the faltering talks on the GERD, stressing that the matter is not a cause for concern in any way.