Why Nile Renaissance Dam talks are on hold for now

The Grand Ethiopian Renaissance Dam negotiations between Egypt, Ethiopia and Sudan have been in a state of calm since the last session that was held under the auspices of the African Union and completely failed to reach a binding agreement between all parties. 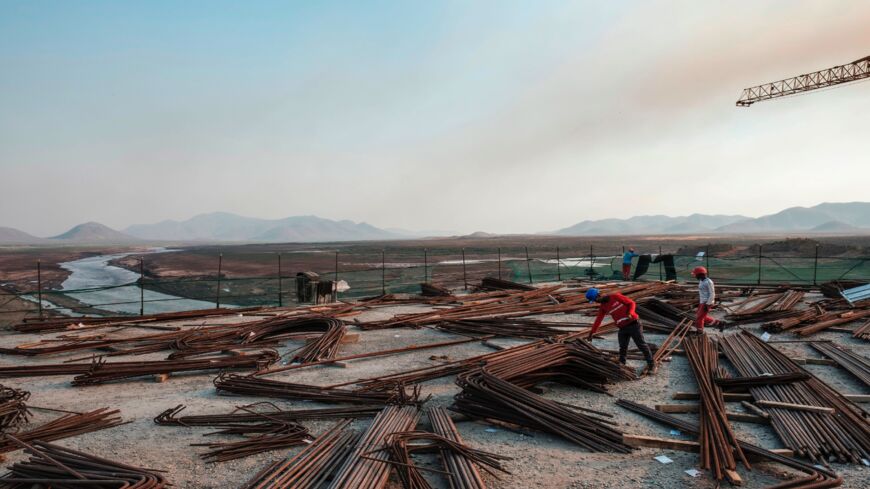 Kafule Yigzaw (L) checks iron bars at the Grand Ethiopian Renaissance Dam (GERD), near Guba in Ethiopia, on Dec. 26, 2019. The Grand Ethiopian Renaissance Dam, a 145-meter-high, 1.8-kilometer-long concrete colossus, is set to become the largest hydropower plant in Africa. Across Ethiopia, poor farmers and rich businessmen alike eagerly await the more than 6,000 megawatts of electricity officials say it will ultimately provide. Yet as thousands of workers toil day and night to finish the project, Ethiopian negotiators remain locked in talks over how the dam will affect downstream neighbors, principally Egypt. - EDUARDO SOTERAS/AFP via Getty Images

CAIRO — The negotiation session held Aug. 28 between Egypt, Ethiopia and Sudan on the Grand Ethiopian Renaissance Dam (GERD) under the auspices of the African Union (AU) ended amid failure to reach a unified draft that includes each of the country’s proposals. It fell short of agreeing on a satisfactory and binding solution for all parties.

Mardasa’s statement came after Egyptian President Abdel Fattah al-Sisi said Sept. 29 during a phone call with British Prime Minister Boris Johnson that Egypt continues to cling to its water rights by reaching a legal agreement that guarantees clear rules on the process of filling and operating the dam and serves the common interests of all parties.

Sisi reiterated this during his Oct. 4 meeting in Cairo with Kenyan President Uhuru Kenyatta.

A report published by Foreign Policy magazine on Sept. 28 said that “as long as the Renaissance Dam remains an instrument in Ethiopia’s bid to control the Blue Nile, negotiations are doomed.”

In this context, Tarek Fahmy, a political science professor at Cairo University, told Al-Monitor over the phone that the AU has not yet announced the failure of the GERD negotiations, and added, “The contacts between the technical committees [of the three countries] are definitely ongoing. There may be no meetings reported in the media, but negotiations are still ongoing.”

Fahmy added that in all cases, Egypt is committed to the negotiation path under the auspices of the AU until any results, be they positive or negative, are announced. In the event of a failure to reach an agreement, Egypt will have to return to the Security Council as an alternative plan, he said.

Egypt and Sudan (the two downstream countries) are seeking to reach a binding legal agreement with Ethiopia (an upstream country) on the filling and operation rules of the GERD within the framework of the Declaration of Principles signed by the three countries on March 23, 2015, in the Sudanese city of Khartoum. The declaration stipulates the dam’s use in an equitable and appropriate manner that causes no harm, amid regional cooperation and integration.

Fahmy pointed out that Sisi conveyed an important message during his meeting with the Kenyan president on Oct. 4, whereby Egypt is sticking to its water rights and the Nile River is a national security issue for Egypt.

He said Egypt has about a year to try to reach a binding agreement between all parties, which is the period that Ethiopia has set for the start of the second phase of the dam filling.

Ethiopia’s President Sahle-Work Zewde announced Oct. 5 that the GERD, built on the Blue Nile, would start generating electricity within 12 months. This comes at a time when Addis Ababa has banned all flights over the dam for “security reasons.”

Amani al-Taweel, director of the African program at Al-Ahram Center for Political and Strategic Studies, told Al-Monitor over the phone that the calm prevailing over the GERD negotiations is due to Egypt’s preoccupation with other issues, such as the Libyan crisis and the situation in Sudan.

Egypt has been making efforts to restore stability in Libya following the battles between the Government of National Accord (GNA) led Fayez al-Sarraj, which is supported by Turkey, and the eastern-based forces of Field Marshal Khalifa Hifter, known as the Libyan National Army (LNA). The battles started when the LNA launched an attack against Tripoli in April 2019.

In Sudan, Egypt has sent urgent aid in the wake of the flooding that hit Sudan in early August, claiming the lives of 121 people and destroying more than 25,000 homes.

Taweel said that while the situation in Libya and Sudan is timely, Egypt has until next year to try to reach a legal agreement on the GERD, one that is binding on all parties.

She said the AU has thus far not taken any steps toward the stalemate prevailing over the negotiations, and she noted that the internal situation in Ethiopia is currently not in favor of the Ethiopian political leadership.

Taweel said there might be changes in the coming period that may somehow contribute to changing the Ethiopian position on negotiations, and this change could be in favor of Egypt.

Addis Ababa witnessed protests in early July following the killing of famous Ethiopian artist Hachalu Hundessa. More than 250 people were killed in the crackdown on the protests. Ethiopian Prime Minister Abiy Ahmed said in a press statement on July 3 that Hundessa’s killing was a “scheme aimed at stirring up trouble” in the country.

Egypt’s former Minister of Irrigation Mohamed Nasr Allam told Al-Monitor over the phone, “The GERD negotiations are not going through a period of calm but rather a hiatus resulting from the absence of consensus among the negotiating parties on the basic principles for operating the dam.”

There are constant Ethiopian attempts to thwart the negotiations and take unilateral measures to complete the construction of the dam, which is what the AU must take action against, he added.

Egypt is suffering from water scarcity and is voicing concerns over a decrease in its water share of the Nile River, which amounts to about 55.5 billion cubic meters, as a result of the dam that Ethiopia began building in 2011 on the Blue Nile in an area located on the Ethiopian-Sudanese border at an estimated cost of about $4.6 billion.

The maximum capacity of the dam reaches 74 billion cubic meters, while the dam affects agriculture in Sudan as it could reduce the amount of silt that flows through the water.

Also, while the low water level affects fish resources, Ethiopia believes the dam is necessary for its economic development as it provides the country and some neighboring countries with large quantities of electricity.