Michael Herzog, Israel's ambassador to the United States, discussed the looming Iranian nuclear accord, chances of a Palestinian political process, the war in Ukraine, Arab-Israeli normalization and more, at a breakfast hosted by Al-Monitor. 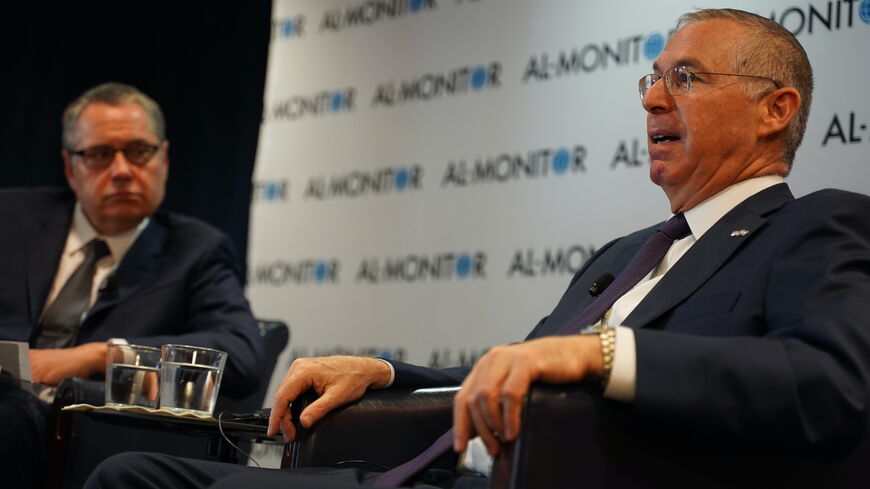 Israel's Ambassador to the US Michael Herzog, with Al-Monitor President Andrew Parasiliti, speaks at an Al-Monitor breakfast in Washington DC, April 14, 2022. - Al-Monitor

Israel is concerned it will bear the consequences of a restored nuclear agreement with Iran that fails to build on the original tattered deal, Israeli Ambassador to the United States Michael Herzog said Thursday.

Herzog spoke during a breakfast briefing hosted by Al-Monitor at the National Press Club in Washington, where the Israeli envoy discussed his government's views on the stalled nuclear talks, prospects for Israeli-Palestinian peace, Israel's response to the war in Ukraine and its deepening ties with Arab states.

Here is the full audio conversation from the breakfast:

Talks to salvage the Joint Comprehensive Plan of Action (JCPOA) are held up over Tehran's demand that Washington drop the Islamic Revolutionary Guard Corps (IRGC), a powerful branch of Iran’s military, from its list of Foreign Terrorist Organizations (FTO). US Special Envoy for Iran Robert Malley has indicated the IRGC would remain subject to broad American sanctions even if it were taken off the terror blacklist, making the FTO designation largely symbolic.

“Since the IRGC is on the terror list, delisting it now as part of a nuclear deal sends a terribly wrong message to our part of the world,” Herzog, who previously served as a general in the Israel Defense Forces, said. “I think it’s no coincidence that [Iran] insists and they define it as a red line that they want to delist the IRGC.”

Herzog said Israel would support an accord that’s “longer and stronger,” referencing a term previously used by the Biden administration to describe plans for a more encompassing agreement that would address Iran’s ballistic missile program, support for terrorist proxies and other non-nuclear issues. But "we no longer hear any talk of ‘longer and stronger,’” Herzog said.

“We would support a diplomatic outcome that rolls back Iran’s nuclear capabilities significantly and for a long time," said Herzog. "Our concern is that the deal negotiated doesn’t meet these criteria.”

"[Iran] should face either a diplomatic outcome that we can live with or deterrence so that they don't push the envelope," he said, elaborating on a point he made in a 2014 article for Al-Monitor.

On differences with the Biden administration over Iran, “I cannot complain that we are not being heard,” Herzog said. “We know exactly where we differ, but it’s an ongoing dialogue.”

Herzog said Israel has taken a “very clear position” against Russia’s war, while also balancing its security interests in the region.

Israel has sent significant humanitarian aid and welcomed thousands of refugees, but hasn’t provided military equipment to Ukraine or imposed sanctions on Russia.

Russia's military supports the regime in Syria, where Israel has carried out a campaign of airstrikes on Iran-linked targets. Russia and Israel maintain a “deconfliction mechanism” to avoid unintended clashes between their forces.

“The only constraint we have is not providing weapons systems to Ukraine, and that is because the Russian military deploys in our neighborhood in Syria,” Herzog said. “Short of that, we’re doing everything we can do to assist Ukraine.”

“We are not a superpower, and we don’t play with this critical element in our national security,” he said, adding that the Biden administration understands Israel’s delicate position.

US, Saudi Arabia should mend ties

“It is important in my view to fix relations between the US and Saudi Arabia,” Herzog said. “I understand the US concerns, but I think Saudi Arabia is a hugely important actor in our part of the world and the Islamic world.”

Ties between the two countries have frayed over US policy in the Gulf and the Biden administration’s pledge to “recalibrate” the US relationship with Saudi Arabia, a major oil producer and strategic partner in the region whose human rights record has drawn criticism from both sides of the aisle.

Asked about prospects for normalization between Israel and Saudi Arabia, Herzog was optimistic but acknowledged the kingdom’s long-held view that recognition of Israel should be offered only in exchange for Israel’s complete withdrawal from the Palestinian territories occupied since 1967.

“We would like to see Saudi Arabia join others in normalizing relations with Israel,” he said. “We understand that this is a complex issue in terms of the Saudi traditionalist views of how to go about Israeli-Arab peace.”

Herzog described the agreements struck with the United Arab Emirates, Bahrain, Morocco and Sudan as a “gamechanger for the region” and says there’s “huge potential” for further deals with other Arab and Muslim-majority countries.

Political process with Palestinians a nonstarter

A political process with the Palestinians is out of the question for the foreseeable future, Herzog said, pointing to differences within Israel’s politically diverse coalition government and dysfunction in the Palestinian Authority. Israel’s conservative prime minister, Naftali Bennett, opposes the creation of a Palestinian state.

The idea is to “keep the window open for political opportunities in the future. But right now I don’t see in the cards that we can really convene the parties to launch such a process.”

Herzog said Israeli leaders still have sought to improve the situation on the ground, including by increasing the number of work permits for Palestinians and boosting financial support to the Palestinian Authority.