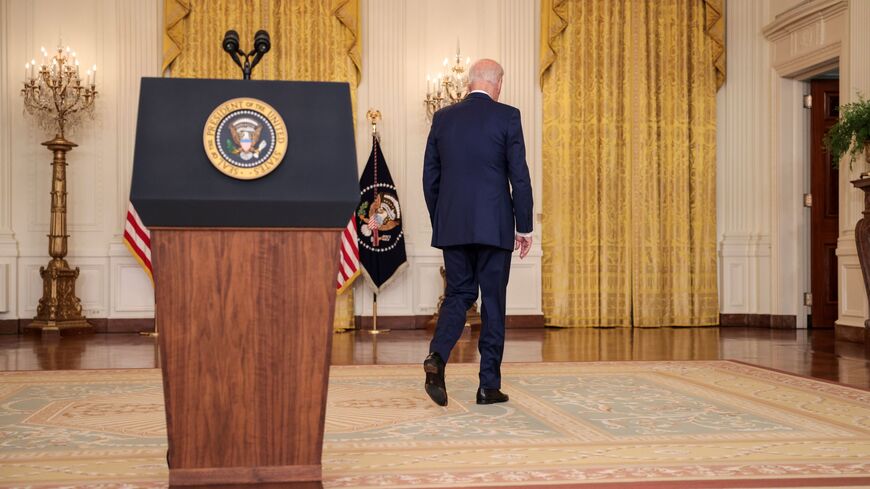 U.S President Joe Biden departs after speaking during an event in the East Room of the White House September 16, 2021 in Washington, DC. - Win McNamee/Getty Images

At the "larger meeting," which will include the six heads of the Gulf Cooperation Council (GCC) countries, as well as Egypt, Iraq and Jordan, the US will discuss "new and promising" ways of cooperating, according to a White House official.

With that in mind, here are five trends we are watching ahead of Biden’s Saudi trip and the GCC+3 summit:

“The scenes described this week by Israeli tourists whisked out of Turkey by Israelis security agents to escape Iranian assassins sounded like something out of an action film,” writes Ben Caspit.

The evacuations from Turkey follow a string of suspicious deaths in Iran blamed on Israel. Iranian officials have vowed revenge for the apparent assassinations of two aerospace officers who died as “martyrs.” A top-level Israeli intelligence official told Al-Monitor that Iran deployed several assassination squads targeting Israelis in Turkey.

This week, Israel’s Counter Terrorism Bureau upgraded its travel risk for Istanbul, but it’s unclear whether Israelis are heeding the warnings. Caspit reports Ben-Gurion Airport still has long lines of Israelis checking in for flights to Istanbul and Turkey's seaside resorts.

2. After Sadrist exodus, what happens next in Iraq?

The future of Iraq’s government hangs in the balance after influential Shiite leader Muqtada al-Sadr ordered his 73-member bloc to submit its resignation to parliament on Sunday. The question is, has Sadr created an opportunity for his Iran-aligned rivals to form the next Iraqi government?

According to Iraqi law, the 73 vacant seats will now be given to the second-place finishers in October’s parliamentary election. The en masse resignations pave the way for the Coordination Framework to form a new government by forming an alliance with Sunni and Kurdish lawmakers. But as Al-Monitor explains here, that would require the political blocs getting over their sharp differences.

As Lebanon’s electricity crisis deepens, households and businesses are struggling to afford clean water. Rodayna Raydan reports that many Lebanese are spending much of their salaries paying private companies to fill water tanks on their roofs. Many farmers, meanwhile, are installing solar panels to supply their farms with the electricity needed for pumping water.

Lebanon is among the world’s most water-threatened countries despite its abundant water resources. The World Bank has long warned that the cash-strapped government is not investing in keeping water supplies safe and secure.

The Russian war in Ukraine continues to wreak havoc on the global wheat supply, forcing farmers in Syria’s impoverished Idlib province to grow more of their own wheat. Mouneb Taim reports that the Syrian Salvation Government, which affiliated with the US-designated Hayat Tahrir al-Sham, has provided more than 1,900 farmers with loans to distribute herbicide and manure. Elsewhere in northern Syria, Khaled al-Khateb reports on efforts by the opposition's self-styled interim government to prevent the smuggling of wheat and other crops from areas under its control.

Calls are growing in Egypt for a boycott of Disney over its movies that feature gay characters. Last week, Egypt’s Al-Azhar religious authority warned against promoting homosexuality through children’s entertainment content. A number of Egyptian actors and film critics have also spoken out against Disney’s inclusion of gay characters, reports Mohamed Sabry.

The entertainment giant reportedly hasn’t obtained permission to screen its new Pixar movie “Lightyear” in 14 countries, including Egypt. The animated film includes a scene with a same-sex couple who briefly kiss.

Watch: As Russia’s war on Ukraine threatens global wheat supplies, farmers in northern Syria's Idlib province are stepping up their own wheat production.

Listen: CNBC anchor Hadley Gamble and Andrew Parasiliti discuss why Saudi-Israel normalization may be just a "matter of time,” President Joe Biden’s upcoming trip to the Middle East, as well as some good news trends in regional markets.