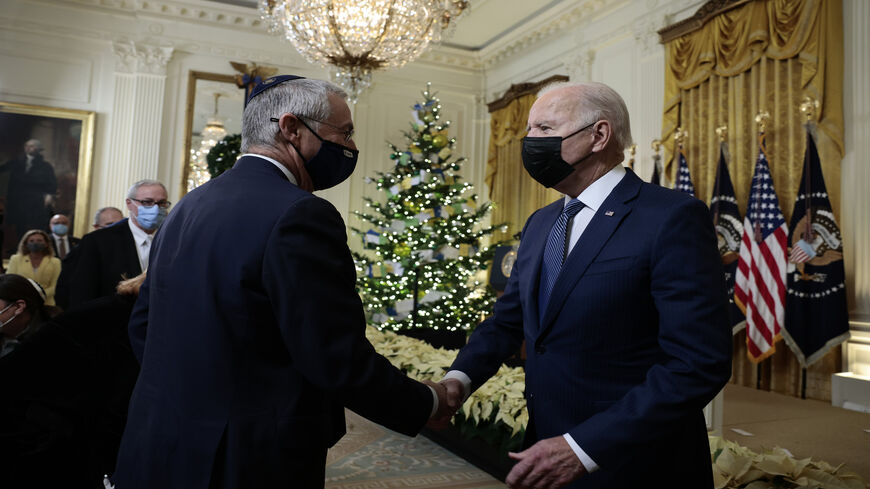 US President Joe Biden shakes hands with Michael Herzog, the Israeli ambassador to the United States, after the menorah lighting ceremony in celebration of Hanukkah in the East Room of the White House, Washington, Dec. 1, 2021. - Anna Moneymaker/Getty Images

Herzog: Important for US, Saudi to fix ties…

“It is important in my view to fix relations between the US and Saudi Arabia," said Michael Herzog, Israel’s ambassador to the United States, on April 14.

“I understand the US concerns, but I think Saudi Arabia is a hugely important actor in our part of the world and the Islamic world,” a reflection of the changed Middle East since the Abraham Accords opened diplomatic relations between Israel and a number of Arab states (though not yet Saudi Arabia).

Herzog was speaking at an Al-Monitor breakfast at the National Press Club in Washington, DC.

“We would like to see Saudi Arabia join others in normalizing relations with Israel,” he said. “We understand that this is a complex issue in terms of the Saudi traditionalist views of how to go about Israeli-Arab peace.”

The longtime flashpoint between Arab states and Israel, the status of the Palestinians, remains unresolved and apolitical process is unlikely, Herzog added, because of differences within Israel’s politically diverse coalition government and dysfunction in the Palestinian Authority (PA).

The idea is to “keep the window open for political opportunities in the future. But right now I don’t see in the cards that we can really convene the parties to launch such a process.”

Herzog said Israeli leaders still have sought to improve the situation on the ground, including by increasing the number of work permits for Palestinians and boosting financial support to the PA.

"[Israel] is avoiding collective punishment, differentiating between the terrorists and the general Palestinian population, allowing Palestinian laborers with valid permits to cross into Israel for work and avoiding actions that might send others into the pool of potential terrorists," writes Ben Caspit.

“Alongside intelligence, offensive and defensive operations, we are advancing solutions that will enable tens of thousands of additional workers to enter Israel in an orderly manner.”

Elizabeth Hagedorn has the report here on Herzog’s remarks, including his comments on the Iran nuclear deal.

The approaching confluence of Easter, Passover and Ramadan is testimony to the tradition of community, faith and spirituality in the Middle East.

It is also a potential trigger for violence, especially in Jerusalem, where Al-Aqsa Mosque and the Temple Mount share common sacred ground.

"The goal is to avoid escalation, to contain violence, to prevent unrest on other fronts and, most importantly, to keep Jerusalem’s holy sites from blowing up during the holy Muslim month of Ramadan and the upcoming Jewish Passover and Christian Easter celebrations," writes Ben Caspit.

Despite Israel's efforts, tensions have boiled over into violence, with the prospect of more to come.

At least 150 were injured at Jerusalem’s holy sites on Friday in clashes between Israeli security forces and Palestinian protesters.  Israel announced a lockdown of the West Bank and Gaza Strip for at least the next 24 hours.

"Hamas has made concerted efforts to contain the anger of the Islamic Jihad movement in the Gaza Strip, and to prevent it from engaging in a new round of fighting with Israel, in response to the latter’s assassination of three Islamic Jihad members," Rasha Abou Jalal reports from Gaza.

Israeli special forces killed three Islamic Jihad operatives in Jenin on April 2, a potential spark to further escalation, given the recent spate of terror attacks and violence in Israel.

"A senior Hamas source who spoke to Al-Monitor on condition of anonymity said that his movement does not wish to see any resistance faction carry out military activities against Israel from the Gaza Strip without consensus," adds Abou Jalal. "Hamas wants to unite and coordinate any political and military position," and keep the peace negotiated by Egypt between Israel and Hamas in May 2021.

Nonetheless, Hamas and associated factions have focused their efforts on escalation in the West Bank, while seeking to prevent fighting in Gaza, a decision targeted as much at the rival PA — which governs in the West Bank — as it is at Israel.

Friction between Hamas and Fatah, the ruling political party of the PA, has gone from bad to worse.

Hamas boycotted last month’s municipal elections in the West Bank and refused to hold them in the Gaza Strip, Entsar Abu Jahal reports from Gaza.

Palestinian President Mahmoud Abbas postponed the legislative and presidential elections, which were scheduled for May 2021, on the pretext that Israel refused to allow East Jerusalem Palestinians to vote. Abbas’ move sparked sharp criticism from Hamas and several other Palestinian factions, and contributed to the escalatory spiral that led to the Hamas-Israel conflict last year.

….and funds ‘resistance’ programming for Ramadan

The head of the Hamas artistic production department told Abu Jahal that the reason why the series is aired during Ramadan is because the Arab TV audiences increase during this month: "Ramadan is considered a month of victory and resistance in Islam, making it necessary to promote the idea of the Palestinian people’s resistance and steadfastness."

"The number of Christians in Jerusalem is steadily declining due to the political instability and the deterioration of the economy, and they now make up less than 1% of the city’s population," Ahmed Melhem reports.

The numbers since 2016 are even lower, "due to political and security instability and the poor economic conditions that have worsened with the COVID-19 pandemic," writes Melhem.

He continued, "The COVID-19 pandemic worsened the situation in several ways. Foreign donations to churches decreased, and so did tourism, in which a large segment of Christians work. Many were dismissed from their jobs as a result. Also, churches were closed for various periods, and Christian properties and holy sites in Jerusalem were not spared from the settlement projects."