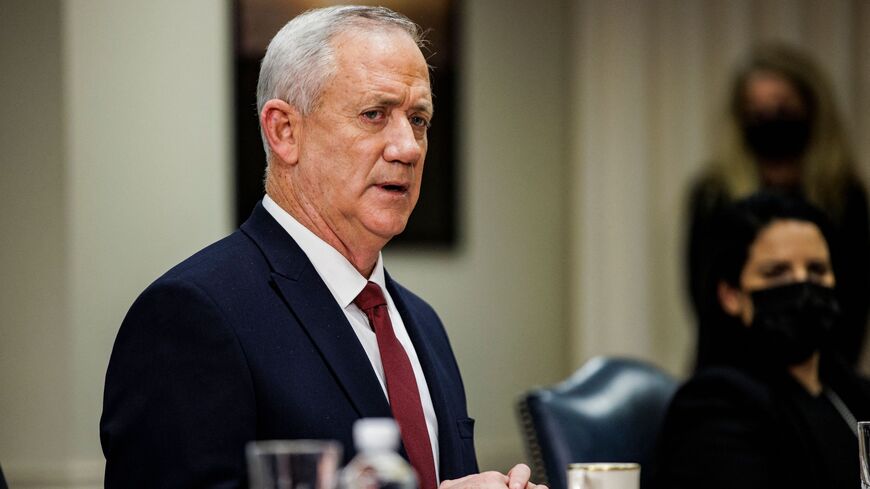 Israeli Minister of Defense Benny Gantz meets with US Secretary of Defense Lloyd Austin (not pictured) at the Pentagon in Washington, DC, on Dec. 9, 2021. - SAMUEL CORUM/AFP via Getty Images

Israel’s Defense Minister Benny Gantz told Al-Monitor that his government continues to engage with Russia in a tacit agreement that allows Israeli airstrikes against Iranian targets in Syria, even after Israel sent limited military aid to Ukraine.

Gantz spoke to Al-Monitor’s Ben Caspit on a wide range of Israeli security issues, both domestic and foreign, for the latest edition of the "On Israel" podcast.

The interview came after the Biden administration reportedly pulled back from considerations to delist the Islamic Revolutionary Guard Corps as a terrorist organization as part of negotiations over a return to the 2015 nuclear agreement.

Israeli officials have opposed to the delisting, which Iran has demanded to move ahead on the talks on the Iran nuclear deal, the Joint Comprehensive Plan of Action. Top Pentagon brass also reportedly advised against the move.

“We’re definitely facing a complex strategic situation,” Gantz told Al-Monitor. “Regardless of whether or not an agreement will be signed, we will continue to highlight Iran’s activities and encouraging our partners to take actions.”

He went on, “We need to remember that Iran is the biggest exporter of terror in the world. Therefore I think it is important to insist that it is kept on the list,” and added, “From an Israeli perspective, whether there will be an agreement or there won’t be an agreement, we will always know how to defend ourselves, by ourselves, and to build the capabilities to face the threat.”

Israeli officials have repeatedly insisted they will not allow Iran to obtain a nuclear weapon. Iran resumed its enrichment of uranium after the Trump administration pulled the United States out of the 2015 nuclear agreement in 2018.

Western officials fear the enrichment has brought scientific know-how that could streamline the process of eventually building a nuclear weapon should Iranian leaders ever choose to do so.

The Israeli defense chief declined to get into specifics about his country’s defense capabilities or to specify when the country’s new laser-based anti-missile system will become operational.

Israel is also expecting a shipment of Boeing-made KC-46 midair refueling tankers from the United States, but testing setbacks have plagued the new aircraft’s development.

“The United States has constantly expressed its commitment never to allow Iran to become a nuclear country,” Gantz told Al-Monitor. “We do have our capabilities and we are strengthening them in order to defend ourselves.”

Caspit pressed Gantz on his reported differences with Prime Minister Naftali Bennett and Foreign Minster Yair Lapid on the US approach to the Iran deal, asking whether the stances were calculated as a “good-cop, bad-cop” arrangement with Washington.

“I think we are basically on the same page,” Gantz said. “Israel has no closer strategic partner than the United States, regardless of who is in the White House.” He added, “Everyone has his own style, but definitely, we all think that it is very important to be strategically strong vis-à-vis Iran.”

Russia’s war on Ukraine may hinder Israel’s ability to do so. Israel has so far refrained from offering armaments to Ukraine, fearing Moscow’s retribution in Syria, where Russian aerospace forces turn a blind eye to regular Israeli airstrikes against Iran-backed targets.

The quiet campaign is considered a national security priority in Israeli defense circles. During an Al-Monitor event last month, Israeli Ambassador to the United States Michael Herzog said sending weapons to Ukraine was not an option for Israel.

“We are not a superpower and we don’t play with this critical element in our national security,” Herzog said.

The Bennett government, however, went beyond its previous step of sending humanitarian aid late last month by shipping helmets and flak jackets to Ukrainian forces.

Asked whether the move could jeopardize Israel’s tacit agreement with Russia on the Syrian front, Gantz answered obliquely: “As we do on all fronts, we are coordinating with the Russians in this region.”