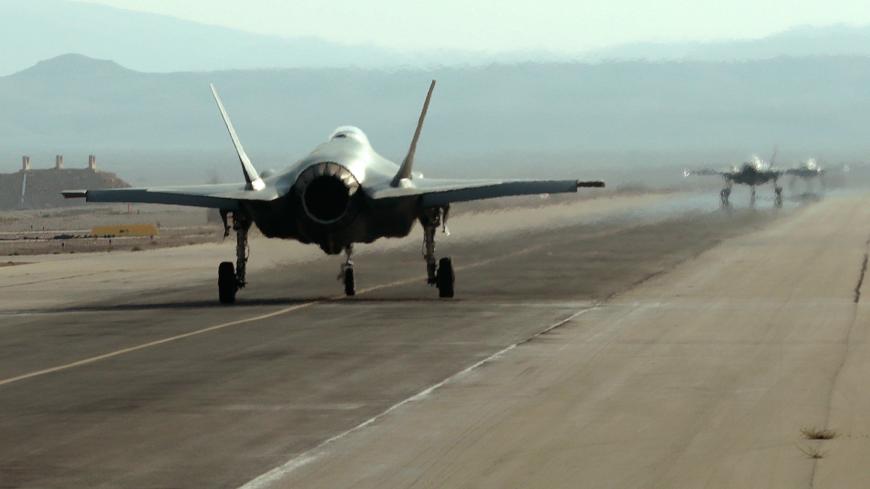 Israeli F-35 fighter jets roll on the tarmac during the Blue Flag multinational aerial exercise at the Ovda air force base, north of the Israeli city of Eilat, on Nov. 11, 2019.

Israel’s Security Cabinet on Sunday approved a proposal to use more than $9 billion in US aid money toward the largest purchase of foreign military aircraft and munitions in years.

The landmark agreement, backed by Defense Minister Benny Gantz and Israel Defense Forces Chief of Staff Lt. Gen. Aviv Kochavi, was the result of a seven-hour meeting of the Security Cabinet on Sunday, Israel’s Channel 12 reported.

About $7 billion of the total cost is to come out of the $38 billion in aid that Washington has allocated for Israel until 2028. The remaining $2.5 billion is to be filled by refinancing a loan from Citibank originally taken out by Israel’s Defense Ministry in 2014 to purchase F-35s, according to Haaretz.

The proposal was met with controversy amid questions over its legality from Attorney General Avichai Mandelblit.

Defense officials argued in the meeting Sunday that they could reapply an authorization to take the 2015 F-35 loan off budget. Mandelblit could have vetoed the decision, but did not; he also said he could defend the decision in court if a challenge is raised.

The arrangement would cost Israeli taxpayers some $217 million in additional interest, but would also mean that Israel could acquire a set of weapons that it wants on a fast track. “It’s a very good trade-off for Israel,” a source familiar with the agreement told Al-Monitor.

The agreement would help Israel achieve its goal of an additional combat squadron, the source said.

Last year, the United States approved a potential $2.4 billion sale of as many as eight Boeing KC-46A Pegasus refueling tankers by 2023. The aircraft are to replace the Israeli air force’s aging fleet of US-made Boeing 707s, which suffered a temporary grounding in 2019.

In July, Israel requested that the United States expedite the transfer of some of the new tankers by sending two US Air Force KC-46s this year, having not yet finalized the approval with Boeing.

The Israeli air force is also looking to obtain additional F-35s to form a third squadron of the highly advanced Lockheed fighter. The aircraft have helped secure Israel’s air dominance in a volatile Middle East, but their range is limited by reliance on the US military’s aerial refueling tankers.

Israel has launched hundreds of precision airstrikes against air defenses and Iran-linked targets in Syria as Tehran has moved fighters and weapons into the war-torn country.

Israeli reliance on occasionally reluctant US support for some of the operations has the Defense Ministry redoubling efforts to expand its strike range.

As during the US presidency of Barack Obama, Israeli officials again have begun raising the specter of a future unilateral strike against Tehran’s nuclear capabilities if Washington reenters the 2015 nuclear deal with Iran.

The Biden administration is seeking to rejoin the original deal but has promised to continue to push for Arab states’ normalization with Israel to shore up regional defense cooperation against Iran.

Sunday’s Cabinet agreement is aimed at further solidifying Israel’s military superiority in the region as the US considers whether or not to go through with a proposed sale of 50 F-35s and armed drones to the United Arab Emirates.