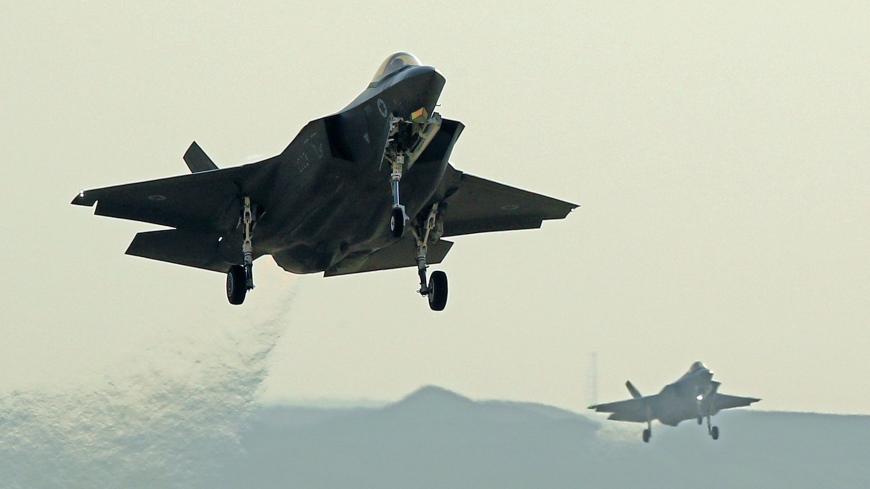 Israeli F-35 I fighter jets take part in the Blue Flag multinational air defense exercise at the Ovda air force base, north of the Israeli city of Eilat, on Nov. 11, 2019. - JACK GUEZ/AFP via Getty Images

US and Israeli F-35 fighter aircraft took to the skies over southern Israel this week for the third such combined training exercise this year.

The exercise, Enduring Lightning III, involved Israeli and US variants of the stealth F-35 Joint Strike Fighter conducting simulated combat with mock ground and air targets, the US Air Force said in a statement.

US expeditionary air squadrons out of Utah and Qatar’s al-Udeid Air Base took part in this week’s exercise, along with a KC-10 extender and a KC-135 Stratotanker, which conducted midair refueling.

Israel was the first country to join the United States’ F-35 program, and has planned to buy up to 50 of the aircraft in the years to come.

Why it matters: Monday’s exercise was the latest sign the Pentagon sees expanding Israel’s offensive air capabilities as a primary means to check Iran’s ambitions in the region.

The US Air Force most recently trained with Israeli F-35s over Israel in August and March.

This week’s training comes in the wake of a failed US push for a renewal of the international arms embargo on Iran at the United Nations.

The coronavirus pandemic forced the Pentagon to postpone a number of other multinational exercises this year, including Operation Bright Star, which is typically held in Egypt. But the United States and Israel have continued to train with the F-35.

What’s next: Israel continues to hit suspected Iranian targets in Syria and first christened its F-35 in a combat strike over the war-torn country in 2018. So far there is no sign such strikes will abate anytime soon.

The United States and Israel accuse Iran of exploiting the vacuum of Syria’s civil war to attempt to move weapons systems to Hezbollah in Lebanon.

Know more: After reports that the Trump administration offered the United Arab Emirates the F-35 in as part of a deal to recognize Israel, Qatar is now said to be requesting the Joint Strike Fighter.