Senior Israeli air force officers tell Al-Monitor that the arrival of the F-35 jets is crucial for Israel to maintain its airspace superiority. 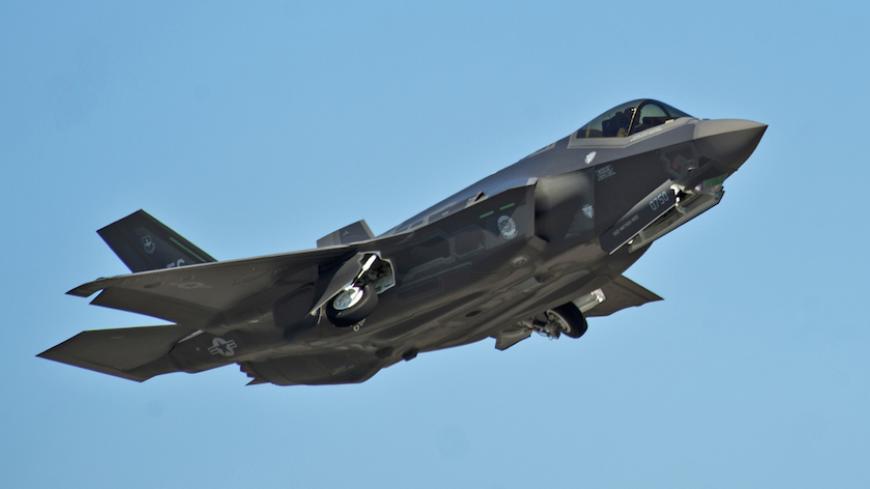 On July 26, Israeli history was made in Dallas, Texas, when “Israeli” fighter aircraft model F-35, “Stealth,” took off on its maiden flight and successfully passed an examination of its overall system. The traditional rollout ceremony of the aircraft had been held June 22 with the participation of Israeli Defense Minister Avigdor Liberman. The arrival of the first planes to Israel is planned for December.

The Israeli air force will be the first air force outside the United States with an operational Stealth squadron. In the United States, the Navy has already made the F-35 serviceable and announced its Initial Operating Capability status. The US Air Force will reach this same milestone in the near future.

The timing of the arrival of the Stealth aircraft to Israel is especially auspicious. A high-level Israeli military figure told Al-Monitor last week on condition of anonymity, “Batteries of surface-to-air S-300 missiles produced by Russia have already reached Iran.” He added, “Although they are not yet operational, we expect them to become operational in the near future.”

The arrival of the F-35 to Israel — simultaneously with the supply of S-300 missiles from Russia to Iran — preserves Israel’s qualitative edge over Middle East skies. “In most cases, the F-35 is able to elude the radar of the S-300,” a high-placed military source told Al-Monitor on condition of anonymity. “This is a big challenge for us, but we are up to it. The Stealth [aircraft] was built for exactly this purpose and will give us freedom of movement even against this new development.”

The Israel Defense Forces (IDF) in general and the air force in particular are more concerned with the possibility that some of the S-300s — missiles that cover a territory of more than 300 kilometers (186 miles) each — will find their way from Iran to Syria or Lebanon. “Such a scenario would pose a major strategic change for us,” said a senior Israeli military source on condition of anonymity. He told Al-Monitor, “We will do everything possible to avert this.” There is also the worry that the Iranians will learn the system, try to produce it by themselves and then transfer the know-how to Hezbollah or Syrian President Bashar al-Assad. Israel is hoping that this will not happen.

One way or another, the Israeli air force is waiting impatiently and excitedly for the new Stealth aircraft. The fierce debate that was held surrounding the capabilities of the aircraft and were detailed in an earlier article in Al-Monitor have come to an end. “This plane will upgrade the entire air force by a complete technological generation,” said a senior IDF source. He told Al-Monitor on condition of anonymity, “This is a transition from fourth-generation fighter jets to fifth-generation, and even more than that. Missions that we carried out to date with a double-digit number of planes will be able to be executed with a low single-digit number of planes.”

The reason is simple: “When you embark on an important strategic bombardment,” a senior Israeli military source told Al-Monitor on condition of anonymity, “you need aircraft that will carry out the shelling, other planes to protect the first ones from interception and yet other planes to provide protection from surface-to-air missiles [SAM]. But the F-35 carries out all these tasks by itself, with tremendous effectiveness. It has small radar footprint and is not threatened by most SAMs. It is a totally different world.”

Some high-ranking Israeli air force members have already flown simulation flights on the sophisticated F-35 simulator system. “We are in a completely different league,” one of them told Al-Monitor on condition of anonymity. “The flight included dogfights against an octet of advanced, non-F-35 aircraft, and the Stealth [aircraft] won hands down.”

Conversations with their counterparts in the US Air Force also greatly encouraged the Israeli pilots. According to the Israelis, it was impossible to wipe the smiles off the faces of the Americans after a week of trial runs of the Stealth jets at a US Air Force base. The data was excellent, all the planes were fit for service and available, the hits were good and the results were perfect. The expression “almost too good to be true” exactly describes the Israeli air force’s view of the Stealth aircraft.

The Israeli air force assessment is that the Stealth planes not only will bring new capabilities, but will also “pull” all the other air force planes forward and bump the entire corps up. The reason: the visual range ability of the Stealth. These aircraft fly within formations and carry a system that enables each pilot to see the entire picture of the surrounding arena from his pilot’s booth. Other planes that are not F-35s can also be included in the F-35 system, thus sharing its tremendous advantages. In this way, the capabilities of hundreds of F-15s and F-16s already owned by the Israeli air force can undergo great improvement, too.

Another advantage is the tremendous number of simulator practice lessons that are available on the Stealth aircraft. “The training concept behind the F-35,” an Israeli military party told Al-Monitor on condition of anonymity, “is to spend 50% of training practice on real flights and 50% in flight simulator practice. This is a revolutionary change. Today, only 8% of flight practice in Israel’s air force takes place in a simulator. The Stealth will greatly bump up this number. This translates into great savings with regard to maintenance of the planes and flight fitness of the pilots. It will also compensate for the expense of the Stealth’s spare parts. In general it is ultimately supposed to lower maintenance costs of a Stealth squadron, perhaps to the level of an F-15 squadron,” an Israeli air force source told Al-Monitor on condition of anonymity.

The bottom line is that the Israeli air force will absorb 33 F-35 jets over the next two years. Air force commander Maj. Gen. Amir Eshel would have wanted more jets, but this number will suffice for now. A special combat doctrine for these aircraft is already being hammered out. Even the rumors that the F-35s have a more limited weight-carrying capacity (for armament) than their competitors have been disproved. When the F-35 flies while reducing radar footprint (maximum stealthiness), it can carry two tons of bombs and another four air-to-air missiles, exactly like the F-16. When it does not reduce its radar footprint, the F-35 is capable of carrying six tons of bombs and four missiles, exactly like the F-15.

“That is more than enough for our needs,” an air force source told Al-Monitor on condition of anonymity. A senior party in the air force said, also on condition of anonymity, “At the first stage of warfare, when the risk of anti-aircraft missiles is at its height, the Stealth [aircraft] have a weight-carrying capacity of an F-16. In the second stage, after the missile threat will be eradicated, they upgrade themselves to the weight-carrying capacity of an F-15. In any case, at this stage we don’t need stealth abilities above Gaza, so the planes can carry six tons of ammunition there from the first minute. This is a fantastic capability. All in all, this is what we have been dreaming about in the Israeli air force all along."