As the Syrian, Lebanese and Turkish skies grow ever more crowded with Russian, American, British and Saudi fighter jets, Israel has decided to purchase more F-35s of its own. 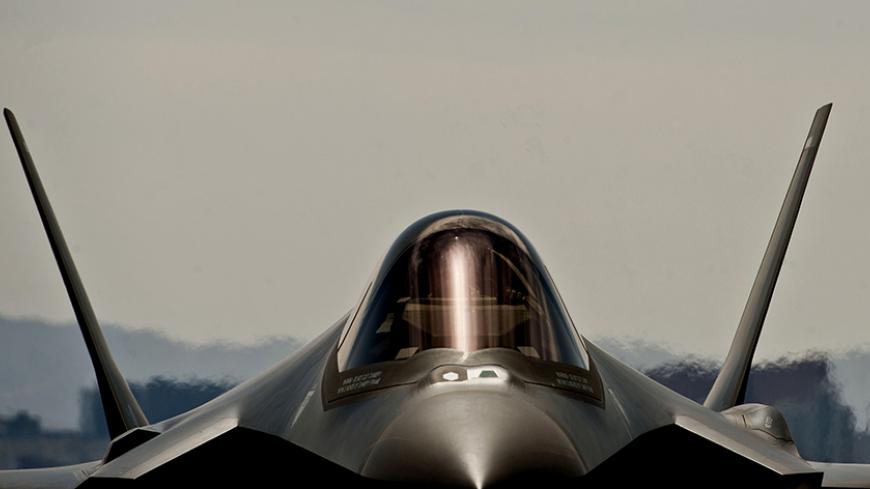 A complicated argument is underway in the innermost sanctum of Israel’s Security Cabinet. On one hand, several decision-makers are asking tough questions about Israel’s plans to purchase F-35 stealth fighter jets. Even some defense officials do not wholeheartedly support the size and scope of the deal. One the other hand, most of the military establishment, particularly the air force, supports the deal. These officials consider the purchase vital to maintaining Israel’s aerial superiority in the Middle East, a task that only gets tougher as the years go by.

If the third stage of Israel’s deal with Lockheed Martin is approved, the total number of stealth fighters in the Israeli air force will reach 50. Two squadrons have already been purchased, and Israel has the option to acquire 17 more.

While the next squadron of 17 jets has yet to be approved by the Cabinet, the government has already approved the purchase of all the ancillary equipment for them. Right now, the debate is over whether Israel should complete the purchase of the jets. The first delivery of stealth jets is scheduled to reach Israel by the end of this year.

In the course of the debate, various sources have been flooding Israeli decision-makers with presentations, statistics and analyses showing that the stealth fighter's performance is much lower than what one would expect from an aircraft that costs more than $100 million. According to these claims, the jet has a limited range of just 1,200 kilometers (746 miles), problems with its stealth capacity and a diminished weapons load. The biggest deficiency of all, however, is US insistence on keeping the jet’s source code to itself. It will not allow any of the countries that purchase the jet to know what really takes place in the aircraft’s impenetrable “brain,” or to control its operating system.

The Israeli air force rejects all of these allegations outright. The top pilots and experts in what is considered the best air force in the world have examined and tested the F-35’s performance and were satisfied with it. The commander of the Israeli air force, Maj. Gen. Amir Eshel, even spoke with his Italian counterparts, who took the jet on long flights (including from Italy to the United States) and reported that its range is significantly greater than what is now being claimed.

Given how complicated and sensitive Israel’s relationship with the United States has been over the past few years, Israel's air force has complete independence in all matters pertaining to the handling of the jet. A senior Israeli defense official told Al-Monitor on condition of anonymity, “The stealth fighter will not be leaving Israel except for operational strikes. We have no intention of sending it for maintenance in the US or Turkey, where its engines are manufactured. The Americans have come toward us in this respect, and we have no complaints against them.”

Another sensitive issue has been the installation of Israeli weapons and arms on the fighter jet, but this, too, has been resolved. As part of the understanding, the Americans agreed to include an F-35 “test jet” with the second squadron. It will have special equipment installed to allow Israel to run practice exercises and test all of the changes and additions it plans on incorporating into the stealth fighter, just as it does with all its other fighter jets.

Overall, the Israeli air force is pleased with the deal. Another senior source said, also on condition of anonymity, “There is no other way to maintain our qualitative advantage. This is undoubtedly the most advanced fighter jet in the world today. Given the current situation, Israel cannot allow itself not to acquire it.”

High-ranking sources in the defense establishment note that in the past four years alone, arms deals valued at $200 billion have been signed in the Middle East. “It is unlike anything we have ever seen before,” says one senior defense official on condition of anonymity. “And the deals include countries with whom we are not in a state of war, like Egypt and Saudi Arabia. The Egyptians purchased two MiG fighter squadrons, a Rafale squadron and a huge amount of Russian S-300 anti-aircraft missiles. The Saudis bought 154 new F-15s of the latest, most sophisticated model. The Gulf states are buying vast amounts of weapons with the most cutting-edge technological upgrades. What we are actually talking about is these countries upping their strategic positions. We may have peace with Egypt, but there is still no doubt that their reference point is Israel. The Egyptians aren’t buying these weapons because of Sudan or even the threat posed by the Islamic State in Sinai. We must be ready for every possible scenario and every radical strategic shift, because we have no other choice.”

Meanwhile, the Israeli air force is in the midst of a far-reaching strategic and operational shift of its own. As one senior air force official told Al-Monitor on condition of anonymity, “Over the past four years, we have increased the assault capacity of each of our jets fourfold. This figure may be hard to absorb, but it is a fact. It would now take us 36-48 hours to conduct the same number of attacks as in the entire Second Lebanon War.”

These figures are especially remarkable given that the number of fighter jets is decreasing steadily due to age. The same source explained, “Today, Israeli fighter jets can perform multiple operations more quickly and precisely than it could just a few years ago.”

The Israeli air force looks northward with serious consternation, noting that the skies above Syria, Lebanon and Turkey “are more crowded than they have ever been before,” said one senior air force official who asked not to be named. Until recently, only the Israeli air force allowed itself to stake out a massive presence over Syria and Lebanon. “Now the Russian air force is there in full force, along with American, British, French, Jordanian, Saudi and international coalition forces. Who isn’t there?”

It is only natural that what concerns Israel most are Russian fighter jets. Much has been written to date about the highly sensitive levels of cooperation between the Russian and Israeli air forces. Since then, the Russians have penetrated Israeli air space by mistake on two separate occasions. In both instances, Israel broke from habit, held back its missiles and allowed the Russian pilots to turn around, apologize and leave.

“Even if a Russian jet flies over Tel Aviv, we will not take it down,” said one high-ranking military source, talking on condition of anonymity. ''The Russians do not appear on our radar screens as ‘enemy’ or ‘predator.’ They appear as ‘neighbor.’ We coordinate with them, so there is no reason for us to have a run-in with them or for them to have a run-in with us. The Russian presence in the skies neither compromises nor restricts the Israeli air force’s maneuverability, and I believe that it will stay that way in the future.” Nevertheless, one gets the feeling that he isn’t completely convinced that this prediction will indeed bear out.