As Turkish President Recep Tayyip Erdogan watches Russian forces flounder in Ukraine, he may be rethinking his own ambitions — or concluding that Turkey is in a better spot than ever. 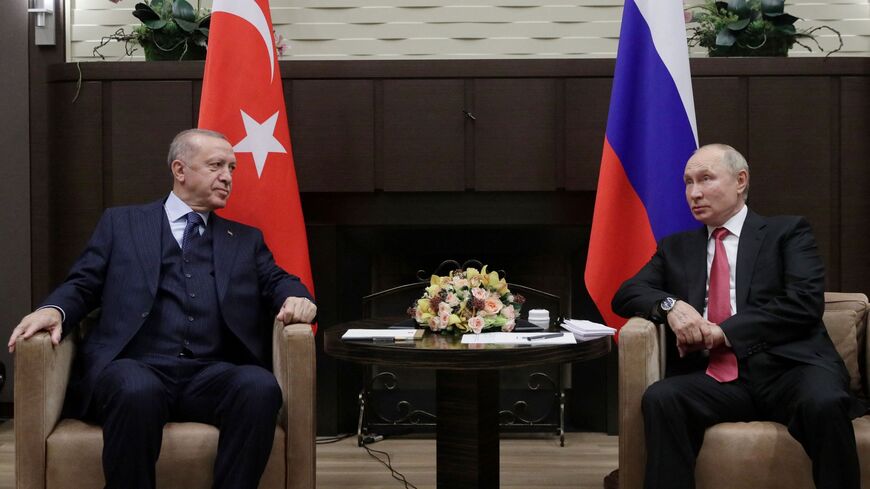 Turkey’s diplomatic isolation was the focus of excited punditry in recent years. But today, Ankara is running out of red carpet as a deluge of foreign dignitaries knock at its door.

Over the past week, NATO Secretary-General Jens Stoltenberg, German Chancellor Olaf Scholz, Israeli President Isaac Herzog, and Greek Prime Minister Kyriakos Mitsotakis have all met with Turkey’s President Recep Tayyip Erdogan, thrusting him back on to the world stage just as many prophesied pariah status for the second longest-serving leader in modern Turkish history. Even US President Joe Biden made his second-ever phone call to Erdogan since taking office in January 2021.

The immediate reason is the conflict in Ukraine.

Erdogan is basking in the glow of this newfound attention, vindicated as he sees things, that under his leadership Turkey has reclaimed the heft and influence that’s rightfully hers. “I underline this, Turkey and the Turkish people shall, God willing, leave their mark on the 21st century,” Erdogan declared at an awards ceremony in Ankara today.

Erdogan’s critics worry that the war will give the Turkish leader a sorely needed boost. Others contend that its economic fallout, be it rising global energy and food prices, or the loss of millions of Russian and Ukrainian tourists, will further accelerate his fall.

The more consequential question, though is what lessons, if any, Erdogan has drawn from the tragedy unfolding next door.

Several are immediately obvious: Faced with a perceived existential threat, the “sleepy” West can rally, and its response can be ferocious and crippling.

Russian President Vladimir Putin grossly underestimated the West's and Ukraine's reaction alike. His army is floundering, his people are now poorer, and his image as an unrivaled strategist is dust.

“One could say that for at least a decade or more, there is a consensus that the West is in decline and that this decline is terminal. Meanwhile, a world that favors China and Russia is ascending. Current events appear to challenge this view to some degree, although it's still early,” said Ryan Gingeras, a professor in the Department of National Security Affairs at the Naval Postgraduate School, who has written extensively on Turkey.

Nicholas Danforth, the author of "The Remaking of Republican Turkey: Memory and Modernity since the Fall of the Ottoman Empire" noted, “Europe’s anti-irredentist instincts run deep. The West is also motivated by a powerful sense of its own history, and irredentist aggression triggers it.”

Populist dictators who surround themselves with yes men, criminalizing all critical thought, end up making terrible mistakes. “Being Putin is harder than it looks, even for Putin,” Danforth said.

Also, NATO’s Article Five, which says that “an armed attack against one or more” NATO members “shall be considered an attack against them all,” offers valuable protection, which is why former eastern bloc countries were all so desperate to join, as is Ukraine.

Erdogan’s response on the diplomatic front, at least for now, mimics Ismet Inonu, a former president and Ataturk’s comrade in arms. In the early days of the Cold War, Inonu tried “to avoid picking sides or getting dragged into the war by doing just enough to keep each side happy and pivoting toward whichever side was winning,” Danforth recalled.

Similarly, since the start of the Ukraine conflict Ankara has sought to mediate between the Kremlin and Kyiv, bringing both countries' foreign ministers together in Turkey for the first time since Russia’s invasion. At the same time, it repeatedly denounced Russian aggression, sealed the Bosporus Straits to Russian warships and transferred more combat drones to Ukraine while keeping its airspace open to Russian planes. It has not joined any Western sanctions against Russia.

Turkey is a vital corridor for the Russian war effort in Syria. This explains in part, why the Kremlin seems so keen to project harmony with Ankara. The effort was on display following Turkish Foreign Minister Mevlut Cavusoglu’s meeting with Russia’s Sergey Lavrov in Moscow today. Lavrov acknowledged “differences on Ukraine,” but lauded Turkey for its “balanced stance” in observing the 1936 Montreux Convention governing the Bosporus and Dardanelles straits — in other words, for not letting NATO warships enter the Black Sea.

Turkey has more agency with Russia than it is credited for, argues Dimitar Bechev, a visiting lecturer at the Oxford School of Global and Area Studies and the author of the recently published “Turkey under Erdogan.” And despite Erdogan’s continued West-bashing, “behind the scenes it’s a different conversation,” he said. “If Turkey were truly Russia’s Trojan horse [within NATO] as some members claim, you could see it blocking all sorts of deployments." Bechev was referring to NATO troop movements in response to the war in Ukraine.

“Turkey has needs that, for the moment, can only be met through cooperation with the United States and to some extent with Europe. For this reason, primarily but not exclusively, we get this consistent tilt or signaling towards Washington and Brussels,” Gingeras said.

For now, “Washington is willing to give Ankara a bit of leeway in maintaining its strategic ambivalence,” Gingeras added. "There is a clear risk for Washington and Europe in creating a rift with Ankara at a time when unanimity is seen as vital to bringing about an end to the crisis."

That calculus may shift, however, if Putin resorts to unconventional weapons. It’s unclear whether Ankara has gamed out such scenarios, and if so, whether Erdogan will take his subordinates’ advice.

Since assigning himself sweeping new executive powers through a controversial referendum in 2017, Erdogan has, much like Putin, surrounded himself with sycophants, stepped up repression and made several bad mistakes. For example, his stubborn refusal to raise interest rates against the counsel of his Central Bank governors (he has fired three of them) is counted among the top factors leading to the prevailing economic mess. Similarly, his decision to buy Russian-made S400 missiles, despite repeated warnings from Washington, has left Turkey’s military under heavy US sanctions and unable to modernize its aging air force fleet.

Yet, on Monday Erdogan told reporters it was “too early” to say whether Turkey would buy more military hardware from Russia, which would lead to even harder US sanctions.

Selim Koru, a fellow at the Foreign Policy Research Institute, a think tank in Philadelphia, thinks that Erdogan still believes the West must win back Turkey and not the other way round. “He expects them to recognize his importance and give him more of what he wants,” Koru said.

As such, Erdogan’s takeaway from the current crisis may be that he is in an even better bargaining position than before. “My general reading,” said Gingeras, “is that Erdogan will do whatever he thinks will allow him to stay in power. That’s priority number one.”

His rivals can only hope that what he thinks will keep him in power will have the opposite effect. As things currently stand, it may no longer be a pipe dream.