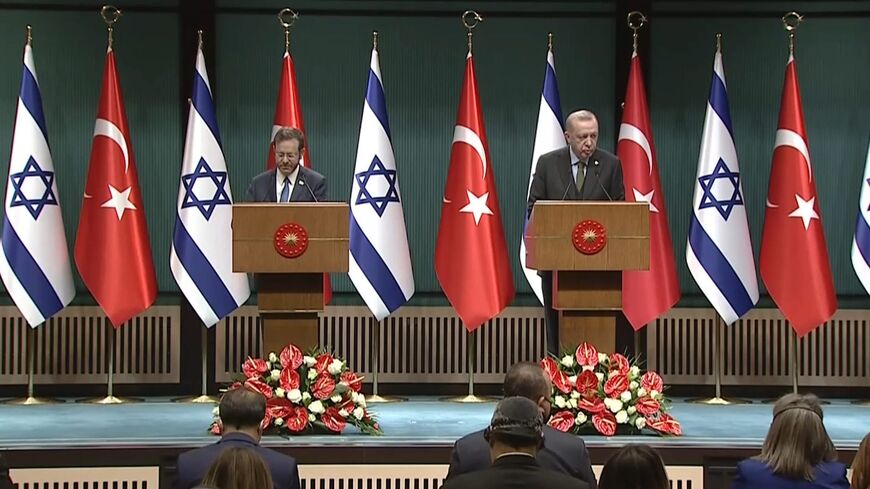 Israel’s President Isaac Herzog and Turkish President Recep Tayyip Erdogan delivered joint statements celebrating Herzog’s exceptional visit this afternoon in Ankara. The two met at the presidential palace in Ankara, where there will be a state dinner for Herzog and his wife tonight.

The two leaders reportedly met for an hour and a half, discussing a variety of issues including mechanisms to mediate diplomatic disagreements and joint working groups for cooperation. They also discussed the presence of Hamas in Turkey, the release last November of two Israeli tourists in Istanbul (in which Erdogan was engaged personally) and the status of their respective diplomatic missions, which have operated without ambassadors since 2018. No mention was made of their return.

Erdogan said in front of the cameras, "I am very pleased to host the Honorable President Herzog here at our residence in Ankara. I believe that this historic visit will be a turning point in relations between Turkey and Israel." The Turkish president said he hopes the two countries will develop deep relations and cooperation in many fields, especially in trade and economy.

Herzog began his statement by thanking Erdogan for his hospitality in Turkish and noting that he and his wife Michal are happy to be in Turkey as the president’s guests.

Switching to Hebrew, Herzog said, "I thank you for inviting me to make a state visit here in the Republic of Turkey and for the productive meeting we just held, which addressed many issues. Your invitation and my visit here represent a continuation of the welcome dialogue and contact that you initiated from the moment I entered the presidency in Israel. This is a very important moment in relations between our countries, and I feel it is a great privilege for both of us to lay the foundations for the cultivation of friendly relations between our states and our peoples, and to build bridges that are critical for all of us."

Herzog addressed the difficulties of the past two decades, saying, "Unfortunately, relations between our countries have experienced something of a drought in recent years. Now, I believe that the relationship between our countries will be judged by deeds reflecting a spirit of mutual respect and will enable us to better confront the regional and global challenges that are common to us all. … The baggage of the past never disappears of its own accord, but we — our two peoples, our two countries — are choosing to embark on a journey of trust and respect, which will include an in-depth dialogue in all fields, and I thank you for the in-depth discussion we just held. We are choosing to look forward, together."

The Israeli president confirmed reports that Turkish Foreign Minister Mevlut Cavusoglu will visit Israel in April to hold talks with Foreign Minister Yair Lapid. According to Herzog, the two ministers will discuss building joint mechanisms and an agenda of cooperation in many fields.

Herzog concluded his address by thanking Erdogan in Turkish, adding, "I pray that God will be by our side and will accompany us on our new path."

Herzog's visit to Turkey is the first of its kind in over a decade, marking a significant shift in the deteriorated relations between the two countries. Since elected, Herzog became the leading public figure in Israel pushing to accept Erdogan’s rapprochement efforts.

Before embarking to Turkey, Herzog told reporters, “Relations with Turkey are important to Israel and the whole region. Certainly when the world order is shaken, it is important to maintain stability in our region. I emphasized this in my meetings in Greece and Cyprus.” He noted that while he and Erdogan are not expected to agree on everything, they will “try to repair the relations and build them through actions and mutual respect.” He emphasized that the trip was coordinated with Prime Minister Naftali Bennett as well as Lapid and with their offices.

Herzog’s first step in Turkey was to lay a wreath at the mausoleum of Mustafa Kemal Atatürk. He was then driven to the White Palace, where he was greeted with canons and with Israeli national anthem played by a Turkish military band.

Defense Minister Benny Gantz said this evening that rapprochement efforts with Turkey also stem from the common security interests of the two countries. "Israel is building its relations with many countries in the region and is strengthening its cooperation in the face of threats in the region, especially Iran's aggression and its attempt to break toward nuclear capabilities."