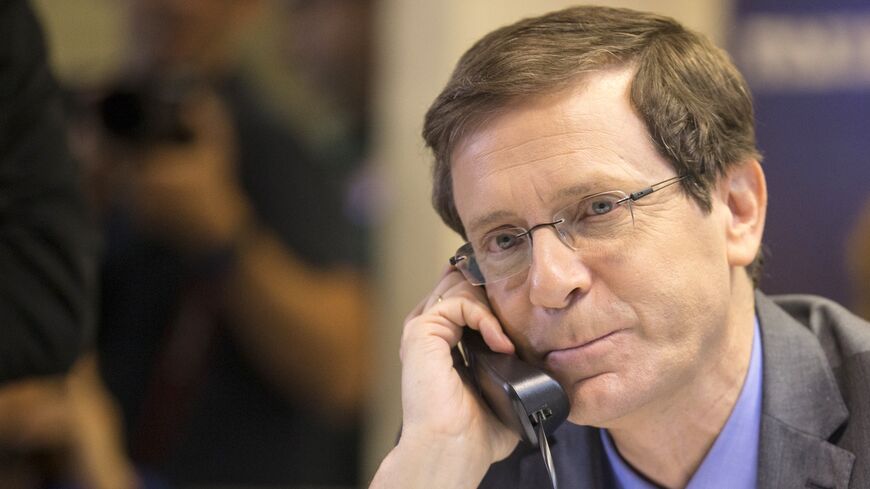 Isaac Herzog, then leader of Israeli Labor, talks with voters on the phone at the party headquarters in the Israeli coastal city of Tel Aviv, on March 15, 2015. - JACK GUEZ/AFP via Getty Images

Israeli President Isaac Herzog spoke on the phone July 12 with Turkish President Recep Tayyip Erdogan. The Turkish president congratulated Herzog on being sworn into his new role as president last week.  A statement issued by Herzog’s office read, “The presidents emphasized in their call that the ties between Israel and Turkey are of great importance to the security and the stability of the Middle East, and there is great potential for cooperation between the countries in many fields, in particular the areas of energy, tourism and technology.”

The Turkish Communication Directorate published a statement of its on, noting, “President Recep Tayyip Erdogan talked to Israeli President Isaac Herzog over the phone. Turkey-Israel relations and regional issues were discussed during the conversation. During the conversation, President Erdogan congratulated Isaac Herzog on his inauguration.” It explained that Erdogan emphasized that bilateral relations were of great importance for security and stability in the region and had potential for benefitting both countries, and he noted that despite the coronavirus pandemic, bilateral trade had increased in recent months.

The Turkish statement also addressed the Palestinian issue. “Expressing that he attached importance to the continuation of contact and dialogue despite all differences of opinion, President Erdogan said that the international community expected a lasting and comprehensive two-state settlement of the Palestinian-Israeli dispute within the framework of UN resolutions.” It noted that in the conversation the Turkish president recalled that positive steps toward resolving the Palestinian-Israeli dispute would also advance Turkey-Israel relations.

Bilateral relations have deteriorated in recent years, particularly since the 2010 Mavi Marmara flotilla incident in which several Turkish activists were killed by Israeli soldiers. Since then, Erdogan had increased his criticism against Israel, against its settlement policy and relating the status of Jerusalem, adopting on a number of occasions an arguably anti-Semitic tone. In 2016, after six years of bitter rift, the two countries agreed to restore diplomatic ties and exchange mutual ambassadors. But after deadly clashes on the border with Gaza in 2018, Turkey recalled its ambassador to Israel and expelled the Israeli envoy to Ankara.

In the past few months, Ankara has been discreetly pushing for normalization of diplomatic ties. In December 2020, Erdogan said Turkey would like to have better ties with Israel and that intelligence contacts continue between the two sides. Other Turkish officials made similar remarks in favor of improving bilateral ties. Still, these efforts were halted in May, when Israel embarked on the Guardian of the Walls operation against Gaza. Jerusalem now believes the phone conversation between Erdogan and Herzog reflects Ankara’s desire to resume the process of rehabilitating ties.