During German Chancellor Olaf Scholz’s first visit to Ankara, both leaders maintain that they want to help Ukraine defend itself while seeking a diplomatic solution. 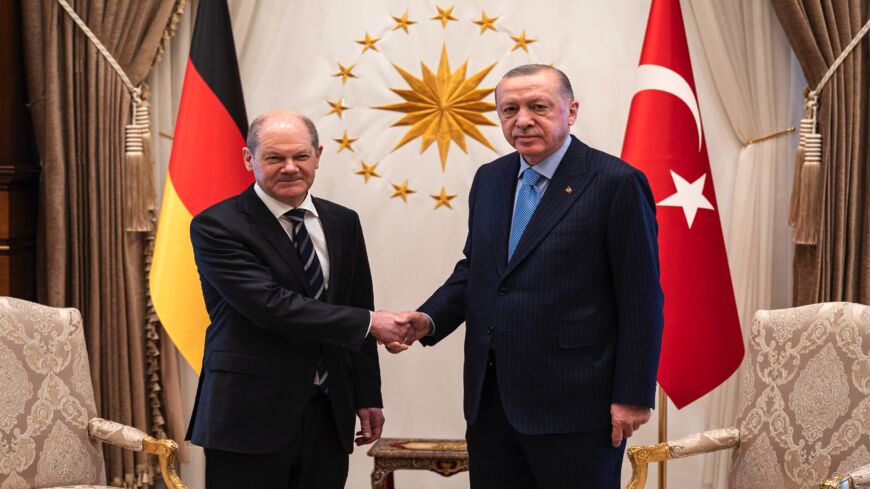 In this handout image provided by the German Government Press Office (BPA), Chancellor Olaf Scholz (L) and Turkish President Recep Tayyip Erdogan shake hands at the start of their meeting on March 14, 2022, in Ankara, Turkey. - Guido Bergmann/Bundesregierung via Getty Images

As Russian forces pounded away at Kyiv and other Ukrainian cities, German Chancellor Olaf Scholz and President Recep Tayyip Erdogan extended a joint call from Ankara for an immediate cease-fire.

“Every day, every bomb drifts Russia further from the world community,” Scholz, who arrived in Turkey on a lightning visit on Monday, said at a press conference at the end of the talks. “[Turkey and Germany] agree on the issue of reaching a cease-fire as soon as possible. Safe corridors are needed so that people can safely leave dangerous areas.”

While Scholz stressed that sanctions against Russia had a “significant impact” on the Russian economy, he carefully refrained from putting Turkey on the spot for not joining them. On Sunday, Turkish Foreign Minister Mevlut Cavusoglu said Turkey had no intention of joining sanctions against Russia, its leading partner in energy and trade.

Alongside Scholz, Erdogan repeated the same line but added that Turkey had gone beyond what other NATO countries had done by providing military aid to Ukraine despite Russia. “We have sent not only sent 50 trucks of humanitarian aid to Ukraine but military aid as well,” Erdogan said. “We will continue to do what is necessary.”

“We would like Ukraine to defend itself,” Scholz said. “We would do that through humanitarian aid, financial aid and military aid.”

Erdogan, who said Turkey would continue its diplomatic efforts, focused on the common points with Germany — as he had done during Greek Prime Minister Kyriakos Mitsotakis’ visit the previous day in Istanbul.

“As two NATO allies, Germany and Turkey have common opinions and concerns. We have agreed to speed up diplomatic efforts to end the crisis while also taking measures to protect European security,” he said. “We will continue tirelessly our efforts to bring forward a lasting cease-fire.”

Last week, Turkey brokered a meeting between the foreign ministers of Russia and Ukraine in the southern city of Antalya. Although the talks failed to bring about a 24-hour cease-fire and improvement of the humanitarian situation on the ground as desired by Ukraine, Mevlut Cavusoglu said that it was positive that it had taken place.

Scholz, for his part, thanked Turkey both for its diplomatic efforts and for closing the Turkish straits to warships, saying this had prevented the escalation of the crisis. Ankara, which holds the gates of the Bosporus under the 1936 Montreux Convention, has not officially closed the waterways but asked all countries, regardless of whether they have coasts on the Black Sea or not, not to send warships through the straits.

Besides the Ukrainian issue, the two leaders dived into bilateral ties, from economic cooperation to human rights, including a recent call by Turkey’s media watchdog, the Radio and Television Supreme Council, to German broadcaster Deutsche Welle (DW) — along with Voice of America and Euronews — to obtain a license. DW has refused to do so, saying that the move was an attempt to restrict international media.

“This has come up in our talks, and we want DW to broadcast in freedom,” Scholz said, as he described human rights and the state of law in Turkey as an area where the two sides did not “agree upon everything.”

Following the formation of the new coalition government of Social Democrats, Free Liberals and Greens in Germany, both Turkish and German foreign policy experts expected that the first visit of the new government would be carried out by Annalena Baerbock, the foreign minister from the Greens Party, and then by Scholz. The change is attributed to Scholz’s active role in the Ukraine crisis, as he made a similar lightning visit to Israel on March 3. According to Al-Monitor’s Ben Caspit, Scholz was the real instigator of the Ukraine-Russia mediation effort undertaken by Prime Minister Naftali Bennett last week.

Ahead of the Erdogan-Scholz meeting, the German government’s deputy spokesman, Wolfgang Buchner, said in Berlin that it was important that Germany stay in close coordination with Turkey, “which is a NATO partner and playing a great role [in the Ukrainian crisis].”

“We need to work together to reach a cease-fire in Ukraine as soon as possible and to defend Ukraine’s sovereignty and territorial integrity,” he said.

Scholz’s visit dovetails with Erdogan’s two-hour meeting with Mitsotakis in Istanbul, where the two leaders signaled the need to “focus on a political agenda” in view of the Ukrainian crisis.

“Turkey and Greece have a special responsibility in the European security architecture which has changed with Russia’s attack on Ukraine,” a statement from the Turkish Presidency’s communication directorate said after the meeting.

"We are facing so many challenges at the moment — that the most important thing is to concentrate on what unites us rather than on what divides us," the Greek prime minister told journalists after the meeting.

For Suat Kiniklioglu, a former member of the Turkish parliament and a foreign policy analyst, the heavy diplomatic traffic — both at the multilateral and bilateral fronts — is indicative of Ankara’s efforts to work itself out of the diplomacy bind due to its strained ties with its critical Western partners and bank on the renewed focus on the security dimension in the global arena brought by the Ukraine crisis.

Kiniklioglu told Al-Monitor that Turkey holds several aces in the Ukraine crisis. “Turkey has demonstrated its hard power by providing Bayraktar drones that enabled Ukraine to counter Russia's military might. It also has shown its capacity for tight-rope diplomacy by bringing together the two sides in Antalya. Add to this its role as the gatekeeper of the Bosporus under the Montreux Convention,” he told Al-Monitor. “The Ukraine crisis has shown that Turkey’s so-called real estate value, its geopolitical position, is crucial for Western security and defense structure.”

“This conflict has put Turkey’s role forward. This has also demonstrated to us that we have to strengthen our relationship with Turkey as both a partner and a candidate country,” Josep Borrell, the EU high representative for foreign and security policy, who attended the Ankara Diplomatic Forum and held a bilateral meeting with Cavusoglu, said in an interview with private broadcaster NTV over the weekend in Antalya. “We have to strengthen our ties with Turkey, and that’s why I am here.”