Turkey's position over the Russian invasion of Ukraine ​​has resonated as a pro-Western shift in Ankara’s foreign policy, but Erdogan needs to go the extra mile. 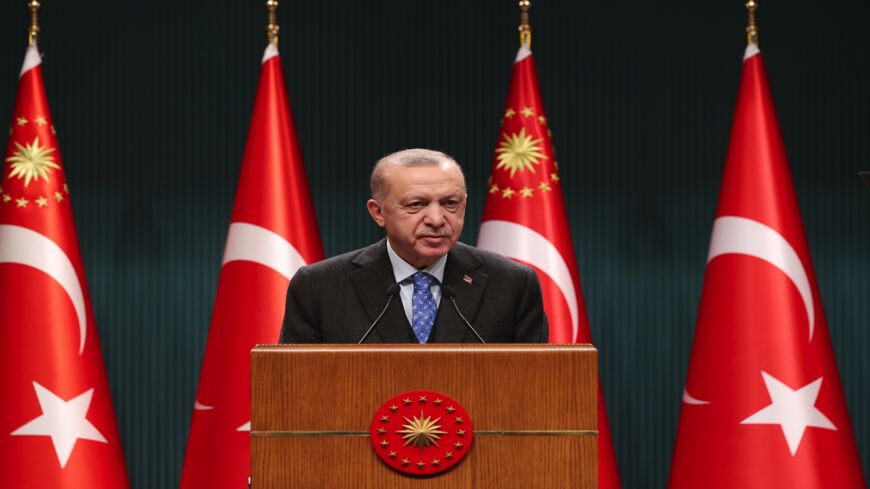 President of Turkey Recep Tayyip Erdogan made a statement after the Cabinet meeting with the agenda of Russia and Ukraine on Feb. 28, 2022, in Ankara, Turkey. - Turkish Presidential Press Office via Getty Images

Turkey is no longer the isolated country it was 21 days ago.

The ruthless Russian invasion in Ukraine that began Feb. 24 has changed everything. The post-post-Cold War era in world history has been inaugurated. The strongest threat of nuclear war since the Cuban missile crisis of 1960 has emerged. The internal conflicts that plague the Euro-Atlantic relationship have faded away. NATO, in a way, has been reborn, attracting countries like Finland and Sweden. The West, in unity, has positioned itself against an aggressive Russia with unprecedentedly tough sanctions.

Similarly, Turkey’s standing has changed drastically. It’s no longer regionally and internationally isolated due to its belligerent, revisionist foreign policy.

Within the span of a week after the invasion, Turkey moved out of isolation. It regained its relevance in the international arena, perhaps at a level unseen during the last decade. Ankara is the only capital that managed to bring Russian and Ukrainian foreign ministers to the negotiating table for the first time since Russian President Vladimir Putin’s unprovoked and unjustified war in the Ukrainian territory.

Russia’s Foreign Minister Sergey Lavrov and his Ukrainian counterpart, Dmytro Kuleba, gathered in a three-way meeting in Antalya due to Turkish Foreign Minister Mevlut Cavusoglu’s initiative and in his presence.

The meeting earned Turkey praise by UN Secretary-General Antonio Guterres, who thanked Turkey for its efforts. He listed Turkey as one of the countries that contributed to peace efforts along with France, Germany, Israel, India and China. Along with phone calls with various European leaders, Erdogan also met with NATO Secretary-General Jens Stoltenberg on the sidelines of the Antalya Diplomacy Forum.

Erdogan announced that Cavusoglu was set to travel to Moscow March 15 and thereafter to Ukraine on March 17 as part of Ankara’s shuttle diplomacy between the two countries.

Turkey is irrelevant no more. On the contrary. Turkey’s President Recep Tayyip Erdogan had a one-hour phone call with Putin, followed by another conversation with President Joe Biden — a long-awaited phone call between the US and Turkish leaders.

According to the White House, Biden and Erdogan “discussed their shared concern about Russia’s unprovoked and unjustified invasion of Ukraine” and reaffirmed their strong support for Ukraine.

Biden also expressed his appreciation for “Turkey’s efforts to support a diplomatic resolution to the conflict, as well as Turkey’s recent engagements with regional leaders that help promote peace and stability.”

Only hours after that phone call, Erdogan welcomed Israeli President Isaac Herzog at a red-carpet ceremony with full honors in Ankara, laying the groundwork for normalization between the two countries.

Herzog's visit was followed by a meeting between Erdogan and Greece’s Prime Minister Kyriakos Mitsotakis. The two leaders had a cordial encounter despite lingering tensions over conflicting territorial disputes in the Eastern Mediterranean that rattled NATO’s southern flank. It seems Mitsotakis' visit went well, as part of efforts to consolidate NATO's southeastern flank.

Poland’s President Andrzej Duda is set to travel to Turkey March 16 as the latest foreign dignitary that Ankara will host in the span of a week. Before Duda, Germany's Chancellor Olaf Scholz was in Ankara on March 14. The visit was particularly important as Germany is a leading actor in shaping Turkey’s ties with the EU. When Social-Democrat Scholz formed his government with the Greens, who were staunchly critical of Erdogan’s government, the widely held expectation was that German-Turkish relations were on the brink of a problematic period.

Yet Russian aggression in Ukraine shook up those expectations. Following a meeting that lasted more than three hours, Erdogan and Scholz stood in front of journalists like two friends satisfied with each other's alliance.

Despite all this, the German press was cautious about future ties. German daily Frankfurter Allgemeine Zeitung warned that a genuine rapprochement with the EU and Ankara should not be expected unless Ankara improves its failing human rights record drastically, according to Germany's state-owned Deutsche Welle. Another German daily, Kolnischer Rundschau, stressed that while the war in Ukraine pushed the differences between the two countries backstage, the problems between the two countries remain.

The German media was also critical of Scholz for timidly mentioning Turkey's human rights record during his presser with Erdogan. The German media outlets underlined that it would be unsustainable for the German government to soften its approach vis-a-vis Erdogan without angering its voter base, recalling that the government pledged to give human rights issues a central place in its foreign policy when taking office.

Nonetheless, Germany’s Turkey observers and experts also noted the shift in Turkey's rapprochement to the West amid Russia’s invasion. Since the breakout of the war, Ankara appears to be drifting from its Eurasianist deviation and trying to recalibrate its relations with the Western capitals despite the prevalent pro-Russian and anti-West discourse in the pro-government media.

In an article titled “Erdogan's tightrope act: In the conflict on Ukraine, Turkey is moving cautiously toward the West,” Gunter Seufert, head of the Turkey division at the SWP — an influential German think tank — listed the positive signals that Ankara has given since the invasion began, noting its steady support for Ukraine.

“The ranks of the adversaries are closing. It is becoming more difficult for Turkey to continue its dearly held seesaw policy,” Seufert observed, referring to Ankara’s balancing act between Russia and the United States.

However, it is not realistic to expect Erdogan to be on the same page with his NATO allies and the European counterparts in regards to the sanctions imposed against Russia at the current stage. Turkey is very vulnerable to Russia in terms of its energy needs. The country's economy is also reliant on Russian imports, particularly wheat and sunflower, as well as Russian tourists.

Keeping its airspace open to flights to and from Russia and the maritime trade routes in the Black Sea open, Turkey, in a way, is undermining the collective Western efforts for Putin to pay a cost for his aggression against Ukraine. Moreover, being careful not to alienate Russia, it has provided a podium to Russian officials as it did to Lavrov in Antalya.

Erdogan projects himself as an essential international statesman through his mediation efforts. This may play well for his domestic political calculations while his support inside Turkey is steadily eroding amid economic turmoil ahead of the fateful elections scheduled for 2023.

However, the prolongation of war in Ukraine has the potential to have a destructive impact on Turkey much more than any other country. It could also undermine the sustainability of Erdogan’s strategic autonomy against the West, which he carefully crafted. His room to maneuver could gradually narrow as the war goes on, forcing him to stand either with the West or with Putin.

Seeing Putin on the losing side can prompt him to tilt more toward the West, albeit cautiously — a process that seemingly has already started. Yet he needs to go the extra mile. He must democratize the regime and rescind the executive presidential system that has been in place since 2018. That is precisely what the opposition in Turkey is pledging to do ahead of the upcoming elections.

Erdogan cannot maintain his one-man rule and be the staunch member of the Western camp at the same time. The war in Ukraine, which pushed him toward adopting a more pro-Western stand incipiently, will eventually dictate a dilemma for Erdogan: Knowing he cannot survive in the West as a Turkish version of Putin after the game-changing war in Ukraine, he must make radical domestic and foreign policy decisions.