With ties with West strained, Turkey gets lifeline from Poland

Drawing on his rapport with the Polish president and a landmark drone deal with Warsaw, Erdogan seems to be aiming at two goals — strengthening his hand in NATO and having a close ally within the European Union. 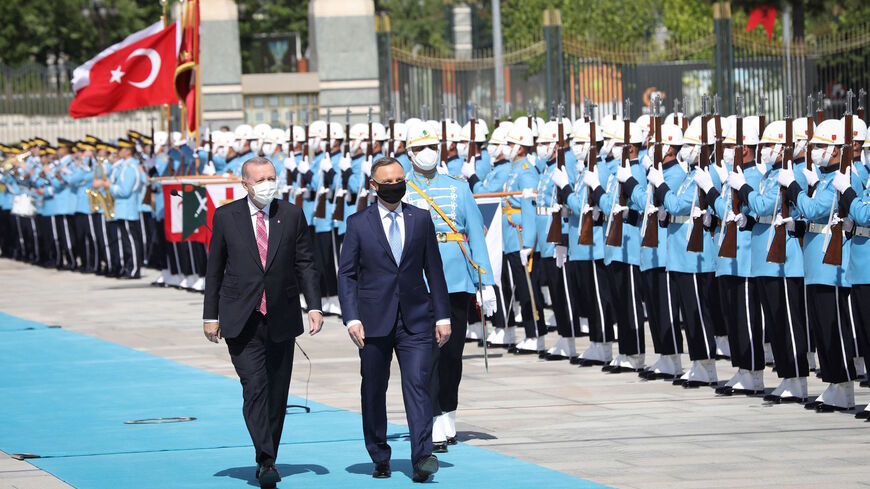 Turkish President Recep Tayyip Erdogan (L) welcomes Poland's President Andrzej Duda (R) ahead of their meeting at the Presidential Complex in Ankara, on May 24, 2021. - ADEM ALTAN/AFP via Getty Images

For those familiar with why Istanbul happens to have a “Polish village,” Polish President Andrzej Duda’s visit to the picturesque neighborhood this week was loaded with symbolism evoking the historical legacy that connects Turkey and Poland.

The “Polish village” — or Polonezkoy in Turkish — was founded in 1842 by Polish exiles who took refuge with the Ottomans in the hope of organizing Poland’s independence struggle after its invasion by Russia, Austria and Prussia. Their leader, Michal Czajkowski, who became known as Mehmet Sadik Pasha after converting to Islam, led an 8,000-strong regiment in the Ottoman army, which, in coalition with the British and the French, defeated Russia in the 1853-56 Crimean War.

Nearly 170 years on, the issue of Crimea is uniting Turks and Poles again. Russia’s annexation of the Black Sea peninsula from Ukraine was high on the agenda of Duda’s talks with President Recep Tayyip Erdogan in Ankara on May 24, along with other topics concerning Russia such as security in the Black Sea and the conflict between Kiev and pro-Russian separatists in eastern Ukraine.

Atop their common stance against Russia on this issue, the two sides took a crucial step on bilateral military collaboration beyond their NATO partnership — a contract for Poland’s purchase of 24 Bayraktar TB2 armed drones, produced by a Turkish company owned by Erdogan’s son-in-law Selcuk Bayraktar. The first delivery is scheduled for 2022. The package includes also smart micro munition manufactured by Turkish company Roketsan, along with ground control stations and ground data terminals for the drones.

As Erdogan stressed, the deal makes Poland the first NATO and European Union member to purchase Turkish drones. According to official data, a total of 180 Bayraktar TB2 drones are currently in the inventories of Turkey, Ukraine, Qatar and Azerbaijan.

Turkey’s adversaries in the EU might not be exactly pleased with the deal, but Erdogan’s calculus is not hard to discern. Drawing on his rapport with Duda, he seems to be aiming at two goals —strengthening his standing in NATO and having a sort of “Trojan horse” in the EU. For Erdogan, military partnership with Poland is a proof that Turkey contributes to NATO efforts to deter Russia. And with the added premium of Turkey’s close relationship with Ukraine, he hopes to appeal to US President Joe Biden as a valuable NATO partner against Russia. The two leaders are expected to have their first meeting on the sidelines of the NATO summit in Brussels on June 14, with Erdogan eager to break the ice with the US president.

In a videoconference with US business leaders May 26, Erdogan voiced optimism that the meeting would “herald a new era” between Ankara and Washington, despite what he termed as “the extra burden” Biden put on bilateral ties by recognizing the Ottoman-era massacres of Armenians as genocide.

While the Turkish-Polish alignment against Russia is certainly good news for Washington, their drone deal might not be equally welcomed, given its implications on commercial competition in the drone market. Turkey’s public broadcaster TRT portrayed the deal as “a major step challenging the American monopoly” over the sector, stressing that Turkey had become the world’s fourth-largest producer of armed drones after the United States, Israel and China.

Another question is, to what extent can Warsaw help Ankara to advance its interests?

Poland has had good relations with the United States for several decades now and hosts US troops and infrastructure. The Turkish-Polish rapprochement has been facilitated by the political affinity between Erdogan and the right-wing Duda. Both are populist leaders, accused of undermining democracy in their respective countries, and both enjoyed an extraordinary chemistry with US President Donald Trump.

Faced with economic turmoil at home and diplomatic isolation abroad, Erdogan hopes for Polish support to strengthen his hand at NATO and normalize ties with the EU, particularly to speed up the updating of Turkey’s customs union deal with the bloc.

Warsaw, for its part, would like to see Ankara align also with the Bucharest Nine, a group of Eastern European countries created at the initiative of Poland and Romania against perceived threats from Russia following its annexation of Crimea in 2014. At the joint press conference in Ankara, Erdogan welcomed Duda’s proposal to establish a trilateral dialogue that would include their Romanian counterpart. “Turkey is our strongest ally in this part of the world,” Duda said, suggesting that he envisions Turkey as a bulwark against Russian dominance in the Black Sea region.

Back in 2019, Ankara irked Warsaw and other NATO allies by blocking a NATO defense plan for the Baltics and Poland in a bid to extract support for its campaign against Kurdish forces in Syria. It dropped its veto as part of efforts to mend fences with the West following Biden’s election. During Duda’s visit, Erdogan announced that Turkey would deploy F-16 jets in Poland as part of NATO’s Baltic air policing mission, another initiative aimed at deterring Russia, and welcomed Poland’s contribution to a NATO mission to help Turkey against regional security risks, based in Incirlik in southern Turkey.

But can Erdogan rely on steadfast Polish backing in his dealings with the EU and NATO? Karol Wasilewski, a Turkey analyst at the Polish Institute of International Affairs, points out that Poland has never stood out as a forefront opponent of tougher policies against Turkey within the EU, even though it has generally favored political compromise, mainly due to its “NATO first” policy.

The analyst cites Turkey’s fraught relationship with the United States as the greatest challenge to the development of Polish-Turkish ties. The US sanctions against Turkey over its purchase of the Russian S-400 air defense systems “were calculated to not hamper Turkey’s military cooperation with other NATO allies,” he writes, but the prospect of tougher sanctions in the absence of compromise “may complicate [Poland’s] defense cooperation with Turkey.” Similarly, a revival of Turkey’s confrontational policy toward EU members such as France, Greece and Cyprus “would force Poland to take a position in the intra-EU debate on imposing sanctions on Turkey.”

From Turkey’s perspective, meanwhile, adding a military dimension to its ties with Poland could further strain its relationship with Russia, which is already irked by Ankara’s military cooperation with Ukraine. In a fresh warning that coincided with Duda’s visit to Turkey, Russian Foreign Minister Sergey Lavrov urged Ankara to “carefully analyze the situation and stop fueling Kyiv's militaristic sentiment.” Encouraging “aggressive” Ukrainian actions on Crimea amounts to an encroachment on Russia's territorial integrity, he added.

That said, many other aspects in Ankara’s attitudes keep doubts alive that Erdogan’s efforts to pivot back to the Western fold are tactical moves to break free from diplomatic besiegement and that he has not given up on playing a double game between the United States and Russia.