With one eye on Russia, Turkey expresses support for Ukraine

The success of Turkish-made drones in Ukraine is the most obvious sign of Ankara’s backing for Kyiv, but fear of Russian backlash is making Turkey tread lightly. 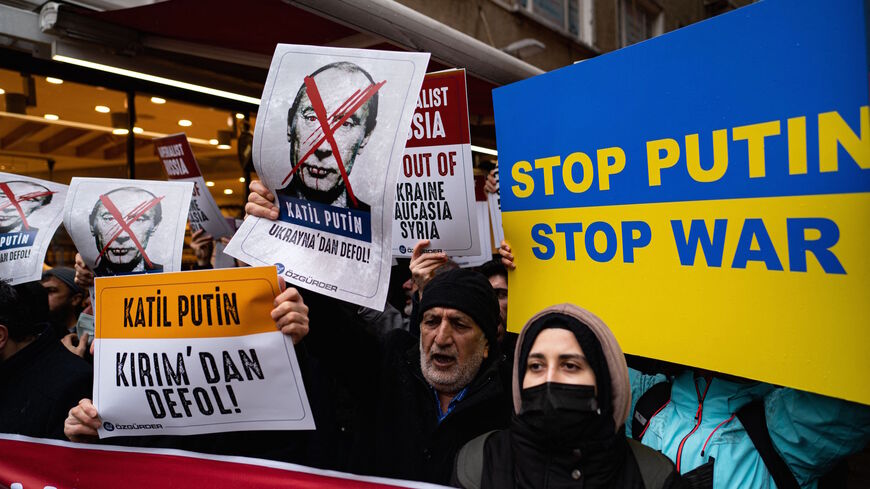 Demonstrators hold placards during a protest against Russia's military operation in Ukraine in front of the Russian embassy in Istanbul on Feb. 24, 2022. - YASIN AKGUL/AFP via Getty Images

ISTANBUL — Imagery of a burned-out Russian military convoy in Ukraine shared on social media over the weekend credited its destruction to Turkish-made drones.

Turkish officials, however, have remained silent about the success of the country’s prized weapon against one of the world’s most advanced militaries for fear of a Russian backlash, according to analysts.

The footage, posted by the Ukrainian Embassy in Ankara on Sunday along with drone video purportedly showing the moment of a strike on Russian vehicles, was accompanied by a jubilant message acknowledging the role of Bayraktar TB2 drones.

Turkey has sold dozens of the drones to Ukraine since 2019. Having proved their worth against Russian-produced weaponry in Syria, Libya and Nagorno-Karabakh, they first saw action in Ukraine in October last year when a TB2 destroyed artillery in the eastern Donbas region.

The unmanned aircraft are the most potent sign of Ankara’s support for Ukraine, support the Turkish government is reluctant to flaunt it so as to not antagonize Russia.

“There’s talk of Turkey striking a balance between the West and Russia but Turkey is clearly and openly supporting Ukraine, and Ukraine seems satisfied with what Turkey has been doing,” said Ozgur Unluhisarcikli,  director of German Marshall Fund in Ankara. He told Al-Monitor, “Everyone sees what the Turkish drones are doing to Russia. Everyone questioned if they would be useful in a real battle and they have been.”

Turkey has close ties to both its Black Sea neighbors. As well as its defense deals, trade between Turkey and Ukraine reached $7.4 billion last year, much of it in agricultural products. The vital tourism sector also leans heavily on Ukrainians, with more than 2 million visiting Turkey last year despite the COVID-19 pandemic.

Russia also has defense ties with Turkey despite its status as a NATO member. Turkey's purchase of Russian-made S-400 missiles in 2018 created a significant rift between Ankara and NATO.

Nearly half of Turkey’s natural gas needs are fulfilled by Russia, a reliance underlined by the opening of the TurkStream gas pipeline across the Black Sea two years ago. Russian engineers are also building Turkey’s first nuclear power plant at Akkuyu on the Mediterranean coast.

Russian trade with Turkey stood at $34.7 billion in 2021. Russia is also a major importer of wheat and other grains to Turkey as well as sending 4.7 million tourists last year.

Despite being on opposing sides in Syria, Libya and Nagorno-Karabakh, Ankara has built a close working relationship with the Russian military, carrying out joint patrols in northern Syria and helping to monitor a Russian-backed peace deal between Armenia and Azerbaijan.

“The main dilemma for Turkey, especially in the beginning of the crisis, was how to help Ukraine without sacrificing all the efforts Turkish decision-makers have invested in building a multi-dimensional relationship with Russia, especially after 2016,” said Karol Wasilewski, Turkey analyst at the Polish Institute of International Affairs.

In 2016 Turkey felt Moscow’s economic wrath in the form of sanctions on tourism, restrictions on Turkish companies operating in Russia and a ban on imports after Turkey shot down a Russian military jet over the Syrian border.

With the Turkish economy currently experiencing its worst downturn in two decades, Ankara has plenty of reasons not to rile Russia through overt displays of support for Ukraine.

“What Turkey is trying to do is avoid retribution by Russia,” Unluhisarcikli said. “It’s one thing to be a very powerful country far away from Russia, but it’s another if you’re not so powerful and a neighboring country with a few open fires with Russia like Syria, Libya and the ongoing peace process with Armenia, which Russia could stop if it wanted to. There’s also the question of Turkey’s economy and its dependence not only on Russian energy but also tourism. Turkey has to tread carefully but it’s not striking a balance between Russia and Ukraine. Turkey’s supporting Ukraine but in a way that won’t attract retribution by Russia.”

There has been an outpouring of public support for Ukraine and Turkey has dispatched humanitarian aid to the war zone. On Monday, Turkey’s Defense Minister Hulusi Akar spoke by telephone with his Ukrainian counterpart Oleksii Reznikov.

Turkey wields unique influence over the war in the power to close the Bosporus and Dardanelles straits. On Sunday Turkish Foreign Minister Mevlut Cavusoglu recognized the situation as a war, a distinction that allows Turkey to close the straits under the 1936 Montreux Convention. But given that Russia probably already has most of its naval forces in place, the closure of the straits may not be such a powerful tool.

US Secretary of State Antony Blinken thanked his Turkish counterpart for "continued implementation of the Montreux Convention" in a phone call today, according to a State Department press release.

Now observers are wondering if the war could see Turkey step back from its ties with Russia and become more interlocked with Europe’s security outlook.

“Turkey may use this opportunity to rebuild its relationship with the West, especially with the United States, and I guess it will make use of this opportunity, providing that the international isolation of Russia continues, “ Wasilewski said. “What makes this scenario even more probable is the unprecedented extent of sanctions imposed on Russia, which may make it a much less attractive economic actor, effectively diminishing its charm for Turkey.”

Given the changes in other nations’ postures following the Russian invasion, most notably Germany, Unluhisarcikli added, “This is the end of the post-Cold War period and all countries, with Turkey not being an exception, will revise their foreign policies.”