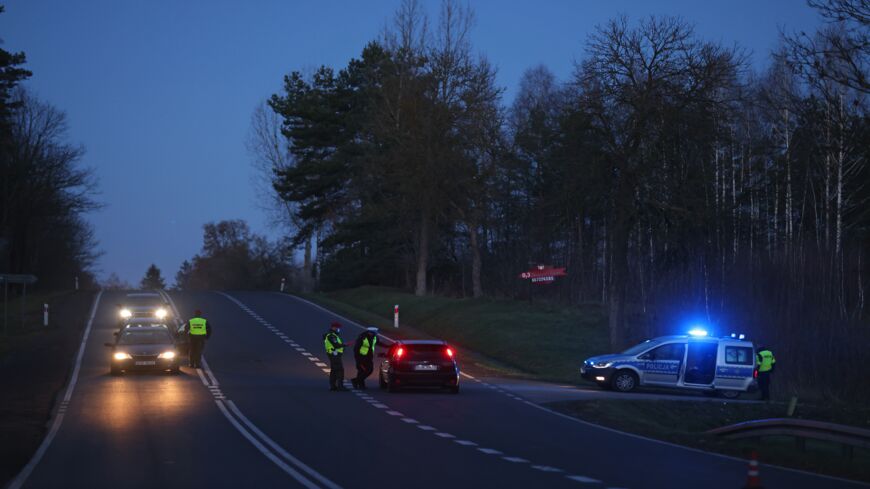 Police check approaching vehicles at a checkpoint along a road leading toward the border with Belarus on Nov. 10, 2021, near Kuznica, Poland. Poland has amassed troops along its border with Belarus to repel a growing population of migrants, mostly from the Middle East, transiting through Belarus with the apparent support of that country's authorities. Poland, the European and NATO have accused Belarus of orchestrating the crisis, enabling asylum-seekers to use Belarus as a waypoint on their journey to claim asylum in EU countries. - Sean Gallup/Getty Images)

ISTANBUL — Turkey’s flagship carrier, Turkish Airlines, denied claims it was helping fuel irregular migration to the European Union in a statement Wednesday amid a growing border crisis between Belarus and Poland with international implications.

EU officials Monday threatened to ban airlines over their alleged roles in facilitating Minsk-bound travel for asylum-seekers, which Belarusian authorities have reportedly been guiding toward the Polish border. The carriers that could be targeted include Turkish Airlines, the United Arab Emirates’ FlyDubai, Belarus’ Belavia and other commercial airlines.

Videos and media reports this week showed thousands of migrants amassing at the Polish border and seeking entry as part of an apparent retaliation by Belarusian President Alexander Lukashenko against EU sanctions imposed over the regime’s crackdown on pro-democracy protesters earlier this year.

“The EU will in particular explore how to sanction, including through blacklisting, third-country airlines that are active in human trafficking," Leyen said in a statement Monday.

Turkish Airlines, which some Polish officials accused of increasing the frequency of Minsk-bound flights in recent weeks, denied wrongdoing in a statement Wednesday.

"Our company makes sure to comply with all security measures and sensibilities in cooperation with international officials in all its flights operated to all corners of the world," the company said in the statement. “We would like to respectfully inform the public that the allegations in the media are without any basis.”

Turkish Airlines representatives did not respond to multiple requests for additional comments for this report.

The implication of Turkey and Turkish Airlines in the migration crisis, though based on as yet unsubstantiated claims, could impact Turkish-Polish relations after a recent warming that saw Warsaw purchase Turkish-made drones in May, becoming the first NATO member to pursue such a deal.

“Even if Turkey thinks, ‘Well, we aren’t doing anything wrong. We are not doing this on purpose,’ the Polish society seems to think that is not the case, and unfortunately optics in international relations matter,” Karol Wasilewski, head of the Polish Institute of International Affairs’ Middle East and Africa Program, told Al-Monitor.

Wasilewski added, “It will have an impact on Polish strategic culture and … Polish society will remember that Turkey did not help Poland in this tough situation.”

“A month or two ago, Turkey seemed to want to work closely with us,” Morawiecki said, adding he read Ankara’s recent actions to be in “full synchronization” with Belarus and Russia.

“It worries us; we don't like it,” Morawiecki said, also noting that Poland’s efforts to promote tourism in Turkey “turned out to be a one-way favor.”

Assessing prospects for a full-blown Turkish-Polish row, Wasilewski said current grievances would likely be temporary and could be quickly resolved through diplomacy. Still, he underlined that the migration crisis represents the most severe affront on Poland’s borders in modern times, and Polish officials who earlier opposed cooperation with Ankara were now highlighting recent developments as evidence that Turkey is “not a reliable partner.”

In October, about 11,300 attempts to illegally enter Polish territory from Belarus were recorded, up from roughly 150 the same month last year. The majority of asylum-seekers currently in Belarus are reportedly of Iraqi origin, while Syrians, Afghans, Congolese and Cameroonians are also among the crowds at the Polish border.

At least 10 asylum-seekers have died while attempting to cross the Poland-Belarus border since this summer. The current migration crisis comes after Lukashenko threatened in May to allow drugs, radioactive material and irregular migrants to enter the EU unhindered after the bloc imposed sanctions on his regime this spring.

Metin Corabatir, president of the Ankara-based Research Center on Asylum and Migration, said it was unfair to blame asylum-seekers and nations bordering the EU over shortcomings in the bloc’s migration management policies.

“This is a very ethnocentric, Eurocentric approach in the absence of cooperation and responsibility-sharing,” Corabatir told Al-Monitor. “Let’s check how many refugees the Polish government has been receiving,” he added, referencing Ankara’s work to shelter about 4 million refugees within Turkish borders.

Corabatir also highlighted Turkey’s own border crisis this summer during an exodus of Afghan refugees, sparked by the Taliban takeover of their country after a US troop pullout as another instance where the EU was “not taking responsibility” in international migration crises.

“We are talking about the protection of thousands of Afghans from the Taliban, but they are putting all the burden on the [EU’s] neighboring countries,” Corabatir said.

He added, “Blaming [nations] is not a good approach … while also building high walls and closing borders to deny entry to asylum-seekers and refugees in EU territories.”

“Let’s make clear, the European Commission is not paying money to the Turkish government,” Johansson said Tuesday. “We are supporting Syrian refugees in Turkey.”