Belarus has given Syrians two options: cross the border into Poland or be deported. 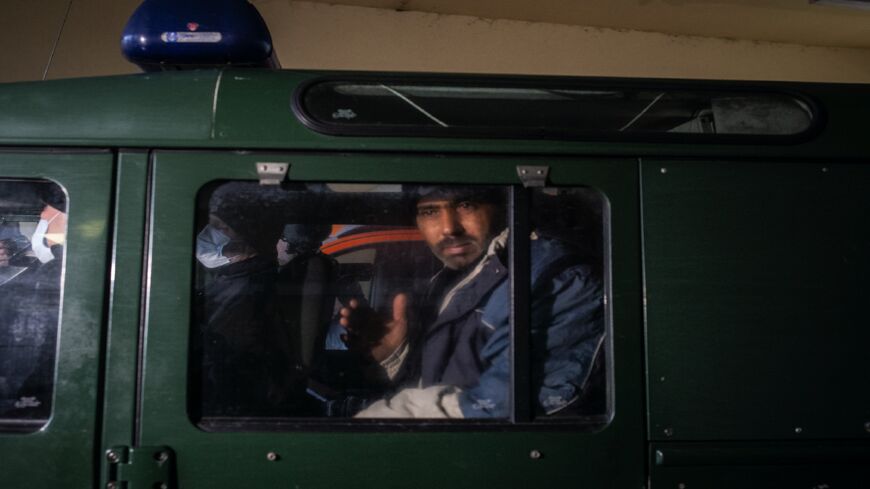 Syrian migrant Masour Nassar, 42, from Aleppo, who has applied for asylum in Poland is taken by Polish border guards out of the Rafala Czerwiakowskiego Hospital Emergency ward of the district hospital on Nov. 19, 2021, in Bielsk Podlask, Poland. Poland and Belarus are currently in a standoff over thousands of migrants, many of them from Iraq, Syria and Yemen, who have amassed on the Belarus side of the border with the hope of entering Poland and the European Union. EU authorities accuse the Belarusian government of enticing migrants with tourist visas and using them as a political weapon. - Maciej Moskwa/Getty Images)

IDLIB — The first flight bringing Syrian migrants home arrived from Belarus Dec. 8, raising concerns about their fate in light of information that some of them were investigated at Damascus International Airport.

According to reports, the Syrian regime’s intelligence services interrogated some returning migrants and requested they get back to the authorities a few days later for further investigation. Also, their travel documents were seized.

Nearly 100 Syrians who were stranded at the Belarus-Poland border took the flight that was operated by Cham Wings Airlines after authorities in Belarus decided to deport all would-be refugees who sought to cross into Poland.

Russia’s Novaya Gazeta reported that the Belarusian armed forces told Syrian migrants stranded on the border with Poland that they needed to cross the border into Europe within three days or be deported to Damascus. The report stated that there were 54 migrants from the Idlib governorate, which meant that their lives would be in danger if they were returned to areas controlled by Bashar al-Assad's regime.

The report indicated that Belarusian security forces are aware the regime does not welcome the return of Syrians who fled to Europe and considers them its enemies. It stressed that “everyone understands that these people cannot return home. They will either be imprisoned or die there.”

Belarusian President Alexander Lukashenko is accused of deliberately igniting a new refugee crisis in Europe, and the EU blames Lukashenko for the escalation on the Polish-Belarus border. Poland and other EU countries accuse the Belarusian leadership of luring people aspiring to travel to the EU and bringing them to the border in order to retaliate against the latest EU sanctions against the country.

In this vein, Mohamad Jaber, a 28-year-old Syrian national who currently resides in Germany, told Al-Monitor, “I was in Jordan and suffering from a very difficult financial situation. I heard that Belarus opened its borders [for entry to] Europe, so I contacted smuggling networks, most of which reside in Turkey, and we agreed that I would pay them 4,000 euros for a visa, a flight ticket to Minsk and a hotel reservation for a week. Ten days later, I was granted the visa, traveled to Belarus and stayed at a hotel in Minsk. Then, the smuggler took me to the border with Poland. The border was not as heavily guarded as now and I stayed two nights at the border. I tried [to cross], but the Polish border guards returned me to Belarus. Then I tried again and managed to enter Poland after walking 15 kilometers. I took a car heading to Germany. When I got there I was recognized as a refugee.”

Abdel Aziz Issa, a 30-year-old Syrian residing in Turkey, told Al-Monitor, “I was a victim of a scam and lost about 2,000 euros. I contacted a smuggler who asked for 2,000 euros in exchange for a visa to Belarus, a hotel booking and flight ticket. He asked me to transfer the amount to Istanbul and to pay him another 2,000 at a later stage. I called him on WhatsApp but he blocked my number. He also changed his phone number. This is when I realized that I had fallen victim to a scam.”

Mohamed Hajj, a 28-year-old Syrian residing in Turkey, told Al-Monitor, “I arrived in Belarus in early November and headed to the Polish border where the conditions were tragic. The temperature was below zero, and the Polish border guards prevented us [from entering]. We had to return to Belarus where the army prevented us from returning to the depths of Belarusian territory. We got confused between the two. We lacked food and clean water. I went through difficult days, and I watched Syrian and Iraqi families with their children. It was heartbreaking. After several attempts, I did not manage to cross the border into Poland, so I decided to return to Istanbul. After major efforts, I managed to return. And my return with the smugglers’ help was very expensive as well. This is because neither the Belarusian authorities nor the Turkish ones allow you to return. But I managed to arrive [to Turkey] illegally. But never again!”

Khalil Miqdad, a Qatar-based Syrian researcher, told Al-Monitor, “Belarus and President Lukashenko are responsible for the large increase in the number of illegal migrants crossing the Belarusian border. Lukashenko, by opening his borders to migrants, is trying to avenge the sanctions that the EU imposed on June 24 on his regime. Confrontations erupted between Polish security forces and asylum seekers who tried to cross the Poland-Belarus border. The EU and the United States warned that new sanctions would be imposed on Minsk amid other efforts to defuse the crisis.”

Miqdad added, “According to eyewitnesses, Belarusian officials are the ones handling the smuggling operation from Belarus to Lithuania, which threatened to open its borders toward Western Europe. Germany is the final destination for migrants because Lithuania cannot host more than 5,000. The increasing number of migrants arriving in Europe through Belarus and Lithuania has coincided with a campaign of demonization and accusations of terrorism targeting the refugees.”

He stressed that the deportation of Syrian refugees to Syria involves many risks, mainly the killing and imprisonment of oppositionists, in addition to extortion. It is worth mentioning that there are a lot of Afghans, Iraqis, Africans and other nationalities among the refugees.

Miqdad said that Europe’s efforts focused on providing humanitarian support by establishing camps to provide shelter, food and medical aid. There are also concerns about a new influx of refugees.

He said that all parties are trying to invest in the refugee crisis to achieve political and material gains and to embarrass each other, as is the case between Russia and Belarus on the one hand and Poland and the EU on the other hand. Belarus cannot make a decision of its own and is subordinate to Russia, which means it is an ally of the Assad regime and will not hesitate to hand over its oppositionists.

Istanbul-based Syrian journalist Qutayba Yassin told Al-Monitor, “Belarus is a dictatorship like all pro-Russia countries. It exploited the refugees in a dirty way — by facilitating the grant of entry visas for nationals of countries who are usually denied visas such as Syria, Afghanistan, Iraq and Yemen — and gathered refugees at the border to threaten the EU. That was perceived as blackmail by the EU, and this is why it prevented the entry of refugees. Had Europe yielded, Belarus would have succeeded in blackmailing Europe and having it resign to the status quo."