Iraqi Yazidis, Syrian Kurds and others are trapped in miserable conditions on the border, caught in a dispute between Belarus and the European Union. 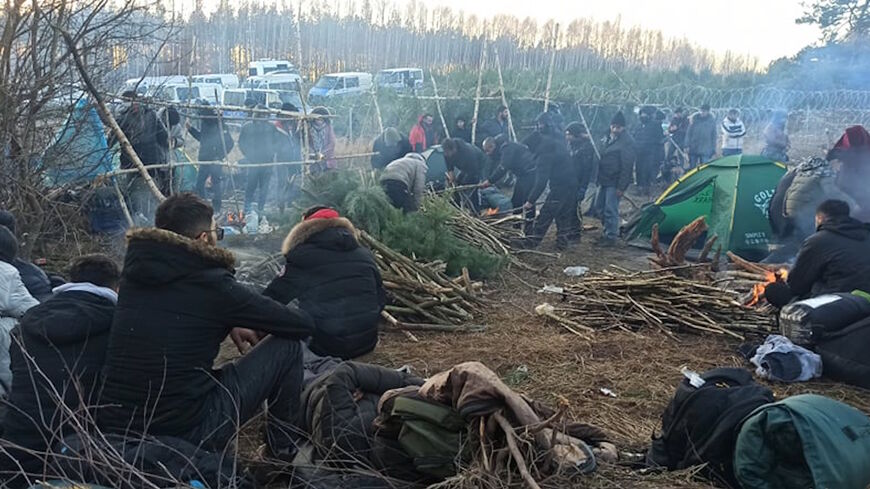 Migrants at the Belarus-Poland border make fires to keep warm on Nov. 11, 2021. - Courtesy of Arshad Hassan

Thousands of citizens of Iraq, Syria and other war-torn countries are stuck at the Belarus-Poland border, hoping to enter the European Union. Instability resulting from the conflict with the Islamic State and the Syrian civil war as well as poor economic prospects are compelling people to make the risky journey.

Iraqi citizens began traveling to Belarus in eastern Europe last summer. The former Soviet republic is not in the European Union, but borders EU members Poland and Lithuania. Belarus is allowing migrants from Iraq, Syria and elsewhere to venture to Poland from Belarusian territory, but Poland is denying them entry. The EU is accusing Belarus of using the migrants as punishment for EU sanctions on the Belarusian government, a charge Belarus denies. There are also reports of Belarusian troops facilitating entry and even forcing the migrants across the border.

Many of those stuck at the border are from Iraq’s Yazidi community, an ethno-religious group long persecuted for its religious beliefs. Arshad Hassan is from the predominantly Yazidi region of Sinjar, also called Shingal, in western Iraq. The region is disputed between Baghdad and the Kurdistan Regional Government. In 2014, the Islamic State attacked Sinjar, killing and enslaving thousands of Yazidis.

Sinjar was liberated in 2015 by the KRG’s Peshmerga forces. Many Yazidis have still not returned, however, and continue to live in displacement camps in the Kurdistan Region. Much of the city still has not been rebuilt. Hassan said Sinjar is uninhabitable.

“The situation in Shingal is not stable because of the destruction from the war. And there’s no security because of many illegal armed groups,” Hassan told Al-Monitor via Facebook Messenger.

A variety of armed groups operate in Sinjar, including the predominantly Shiite Popular Mobilization Units and the Kurdistan Workers Party.

Hassan is particularly concerned about the recent repatriation of Islamic State-affiliated families from prison camps to Iraq’s Nineveh province, where Sinjar is also located.

“The return of Daesh families from Syria to camps in Nineveh is a major worry for us,” he said, using an Arabic-language acronym for IS.

Hassan described electricity and water services in Sinjar as “among the worst possible.” There are also few work opportunities in the camps, and he said he made only $7 a day working in a car repair shop.

“I worked to lift my family out of poverty, but unfortunately I did not succeed,” he said.

The British nongovernmental organization Human Relief Foundation found rampant poverty in Sinjar during a June assessment in the city.

Hassan flew to Istanbul in late October, then to the Belarusian capital Minsk and reached the border in early November. He planned to find work in Europe and send money back to his wife and children. But the conditions he found at the Belarus-Poland border are deadly.

“I haven’t eaten in three days,” he said on Nov. 11 and claimed that two children died that day. Al-Monitor was unable to independently confirm their deaths.

“Either Poland opens the border or we’ll all die of the cold,” he said.

Videos and photos he sent to Al-Monitor show hundreds of people in winter clothing living in tents and makeshift shelters and gathering around fires to keep warm. Barbed wire surrounds the makeshift encampment.

Iraq is relatively safer now than in the chaotic days following the 2003 US-led invasion. IS has been defeated territorially but still carries out attacks and the Yazidi community is still living with what happened in 2014.

“The Yazidi community lost trust in everything due to genocide. That trust was not restored,” Murad Ismael, a Yazidi activist who founded the Sinjar Academy, told Al-Monitor. “People aren’t able to go home; they’ve been living in small tents for years. There’s a lack of economic opportunities and hope.”

In addition to Yazidis, thousands of Assyrian, Chaldean and Syriac Christians, Turkmens and Muslims were persecuted by the Islamic State. Calls for an international tribunal to try IS members have not yet yielded results.

There are also people of other ethnicities and faiths from Iraqi Kurdistan at the border. The autonomous part of northern Iraq is relatively stable and safe, and the US military has a presence in the capital Erbil. However, some are dissatisfied with the KRG’s governance and protests against poor water and electricity services are common.

Many of the region's residents have left due to poor job prospects, particularly in rural areas where there has been little development. Other migrants are angry at the rule of the two largest parties in the region: the Kurdistan Democratic Party and the Patriotic Union of Kurdistan, according to opposition media outlets. Corruption is also common in both federal Iraq and the Kurdistan Region.

The KRG has responded to the reports of its constituents fleeing to Belarus.

“This global crisis should not be used as a political tool against the KRG,” spokesperson Jotiar Adil said in a statement sent to Al-Monitor. “We assure our citizens that our government has been working to resolve salary shortages, improve the delivery of public services, and implement its reforms.”

Adil attributed the emigration to security issues in the surrounding area and the global economic downturn. He told the Kurdish news outlet Rudaw on Nov. 11 that 8,000 people from the Kurdistan Region were at the Belarus-Poland border. People from Yemen, Afghanistan and other countries are also there, also with an extra 3,000 Polish troops sent in this week.

The Iraqi Embassy in Moscow said Nov. 11 that it would organize an evacuation flight for citizens who want to leave Belarus.

People from northeast Syria are also among those seeking to reach the EU via Belarus. Boushra, who declined to give her full name, is from Amude, Syria, where she worked for an international humanitarian organization. After the US withdrawal from Afghanistan, she feared the United States would similarly remove its forces from northeast Syria.

“There’s big concern for people in the Middle East about the US withdrawal from Afghanistan. Kurds only have one alliance,” she told Al-Monitor via WhatsApp.

The US military supports the Syrian Democratic Forces in northeast Syria in their continued fight against IS. The SDF is led by the Kurdish armed group the People’s Protection Units (YPG). In 2019, the Trump administration repositioned US forces in the region and Turkey attacked SDF territory.

Turkey is threatening to invade again, as it regards the YPG as an extension of the Kurdistan Workers Party, a separatist group that fights for greater rights for Turkey’s Kurds and is considered a terrorist organization by the Turkish and American governments.

Boushra expects Turkey to attack again and the Syrian government to take over northeast Syria.

“The threat to Kurds is still there. They know there is oil in northeast Syria,” she said. “Maybe not this year, but in the coming years, Syria will take it.”

Syrian President Bashar al-Assad has repeatedly vowed to recapture all Syrian territory. His forces now control most of the country.

Boushra searched for scholarships, but determined the only feasible way to get out of Syria was illegally. She heard Belarus was a faster option than Turkey or Greece and flew from Damascus to Erbil in September and on to Dubai and Minsk. She made part of the journey to the border on foot, walking for several hours.

The first time she and a small group walked into Poland through the woods, Polish border forces sent them back to Belarus. They were successful the second time, walking six days to a rendezvous point in Poland, where a friend of one of her companions picked them up by car.

“It was the first adventure for me. In Syria, I never went out in the dark at all,” she said. “I overcame my fears.”

The group did not have internet access but was aided by one asylum-seeker’s family back in Iraq via phone.  “A friend realized they could use their Iraqi SIM card. The family transferred credit. They directed us via SMS,” she said. Some of the migrants use power banks to charge their phones, but many are unable to communicate with the outside world.

Boushra reached Germany in October and applied for asylum.

In addition to push factors, there are pull factors bringing people in the Middle East to Europe. Many EU states have strong social welfare programs and Germany allows family reunification for individuals who are granted asylum.