The Kurdistan Regional Government in Iraq said its constituents were lured into emigrating by criminal smugglers. 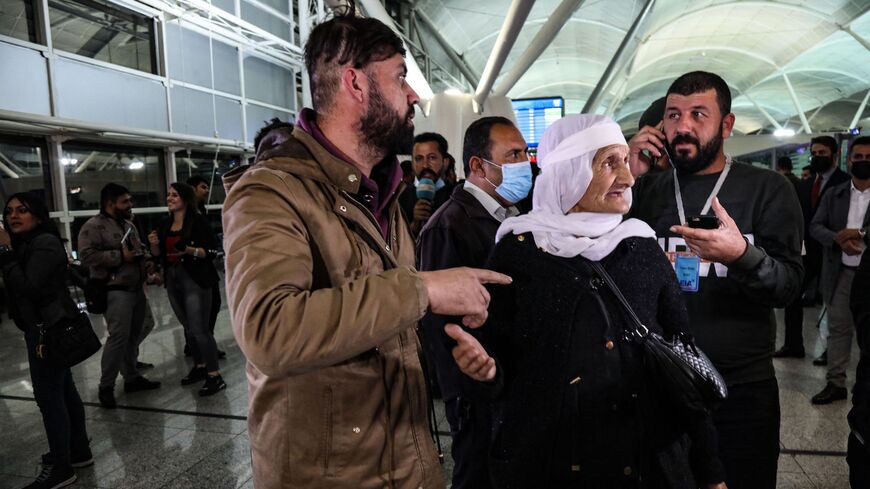 Iraqi migrants who were flown home from the Belarusian capital Minsk arrive at the airport in Erbil, the capital of Iraq's northern autonomous Kurdish region, on Nov. 18, 2021. - SAFIN HAMED/AFP via Getty Images

Hundreds of people returned to the Kurdistan Region of Iraq from Belarus today after attempting to cross into the European Union.

More than 400 migrants arrived at Erbil International Airport from the Belarusian capital Minsk after opting to return home, Kurdish media outlets reported. The flight was arranged by the Kurdistan Regional Government and the federal Iraqi government, a KRG spokesperson tweeted.

Thousands of people from across the Middle East are stuck at the border between Belarus and Poland, hoping to enter the European Union via Poland. Belarusian authorities allowed them into their country, but Polish forces are denying them entry. The EU alleges that Belarus is punishing it for sanctions, though Belarus denies the accusation.

There is a particularly high number of migrants from the Kurdistan Region at the border, including members of the Yazidi community who live in displacement camps. Some told Al-Monitor they fled poverty, fear of an Islamic State resurgence and other problems.

The Iraqi government offered to repatriate citizens in response to the conditions at the border and their failure to seek asylum in the EU.

Kurdistan Region Prime Minister Masrour Barzani spoke to his Polish counterpart Mateusz Morawiecki about the border situation today. Barzani alleged that the migrants were taken advantage of by smugglers, according to a KRG readout.

“Prime Minister Barzani stressed that was not a migrant issue but a criminal human trafficking issue, with the migrants exploited by criminal networks and caught in a dispute between Belarus and the European Union,” said the prime minister.

Morawiecki agreed that traffickers played a role in the crisis, according to the readout.

Such smugglers operate throughout the Middle East and North Africa. They charge people thousands of dollars for a chance to enter Europe, where there are stronger economies and robust social welfare systems.

The KRG said later Thursday that more than 460 people registered to return, and that the plane would carry approximately 430, according to a statement.