Thousands of migrants have gotten stuck at the Belarus-Poland border this winter, many of them Kurds from Iraq. 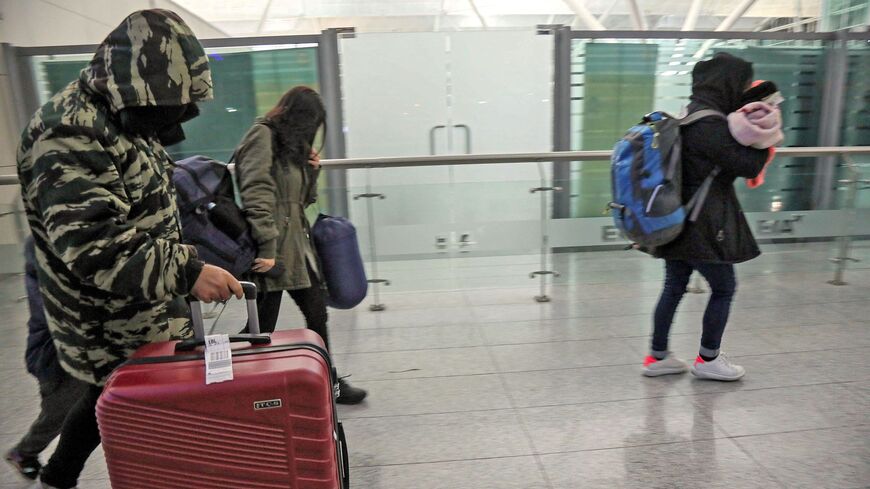 Iraqi migrants who were flown home from the Belarusian capital Minsk arrive at the airport in Erbil, the capital of Iraq's northern autonomous Kurdish region, on Nov. 26, 2021. - SAFIN HAMED/AFP via Getty Images

Authorities from Baghdad and Erbil are continuing to repatriate migrants from Belarus.

The Kurdistan Regional Government (KRG) in conjunction with the federal Iraqi government has returned 1,872 people from the eastern European country to Iraq on five repatriation flights, a KRG spokesman told Al-Monitor today.

Around 2,000 migrants are stuck at the Belarus-Poland border, where they are seeking to enter the European Union. They are predominantly from the Kurdistan Region of Iraq, though there are also Syrians, Iranians, Yemenis and others, the United Nations said in a press release today. The migrants are fleeing economic despair, the looming threat of the Islamic State and more.

Poland is not letting the migrants in, which has left them stranded in the cold. Some people are managing to enter illegally, and others have recently moved to a relatively safer detention center on the border, Euronews reported last week. The crisis is related to Belarus' dispute with the EU over sanctions on the government of Belarusian President Alexander Lukashenko. Belarus is seemingly orchestrating a crisis by allowing migrants seeking entry to the EU to congregate on the border. While Lukashenko denies deliberately using migrants to cause a crisis for the EU, there is compelling evidence he is doing just that.

The KRG and the federal Iraqi government began offering repatriation flights on Nov. 18 for those who opted to return home after failing to enter the EU. The fourth flight to the KRG capital Erbil landed on Nov. 27, the Kurdish news outlet Rudaw reported.