The Iraqi announcement came as the European Union said it would step up sanctions on the Belarusian government and some airlines. 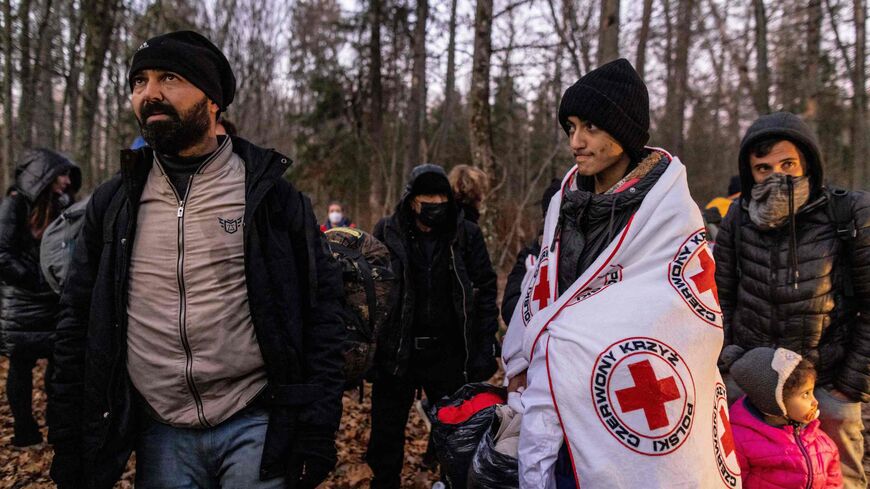 A Kurdish family from Dohuk in Iraq is assisted by activists from the NGO Grupa Granica (Border Group) as they wait for the border guard patrol to take them to the town of Narewka, Poland, near the Polish-Belarus border on Nov. 9, 2021. - WOJTEK RADWANSKI/AFP via Getty Images

Iraq says it will repatriate its citizens stranded along the Poland-Belarus border who want to return home beginning Thursday as aid agencies warn of a worsening migrant crisis at Europe’s doorstep.

"Iraq will carry out a first flight for those who wish to return voluntarily on the 18th" of November from Belarus, Iraqi Foreign Ministry spokesperson Ahmed al-Sahaf said Sunday. He added that Iraqi authorities have drawn up a list of 571 Iraqis who are willing to return from the border “voluntarily” on flights from Minsk to Baghdad.

Iraq has also dispatched diplomats based in Moscow and Warsaw to the border to "check on [the migrants'] safety and communicate with the relevant authorities.” The news of the repatriation flights comes after the Belarusian missions in Baghdad and the Iraqi Kurdish capital of Erbil were temporarily closed last week.

Thousands of Middle Eastern migrants, including many from Iraq’s Kurdistan region, are stuck in makeshift camps at the former Soviet republic's border, hoping to enter Poland, Lithuania or another European Union member state and gain asylum.

Monitoring groups have warned of freezing temperatures and unsanitary conditions for the migrants. Videos and photos sent to Al-Monitor show hundreds living in tents and makeshift shelters using fires to keep warm.

European Commission Vice President Margaritis Schinas, who visited Baghdad on Monday for talks, tweeted that he welcomed “Iraq’s strong commitment to working together on migration, stepping up returns in addition to measures on flights already taken.”

“Together we must put a stop to the instrumentalization of Iraqi nationals being sold a lie by smugglers colluding with Belarus,” Schinas said.

The West has accused Belarus’ autocratic President Alexander Lukashenko of encouraging the wave of migration to Europe in retaliation for sanctions the European Union imposed earlier this year. The Russian ally Belarus denies the charges.

The 27-nation bloc agreed on Monday to impose fresh sanctions on Lukashenko’s regime over the migrant crisis.

“Lukashenko got it wrong. He thought that by acting in this way he would twist our arm and force us to cancel the sanctions,” EU foreign policy chief Josep Borrell told a French weekly.

Reuters quoted Borrell as saying Monday that the sanctions package would be finalized in the coming days and would target airlines, travel agencies and individuals involved in "this illegal push of migrants.”

A number of countries have meanwhile moved to restrict migration to Belarus. Turkey’s Civil Aviation Authority said Friday that Turkish Airlines will no longer sell tickets to citizens of Iraq, Syria and Yemen wanting to travel to Belarus.