Why Russia’s Vladimir Putin is rooting for Turkey’s Erdogan 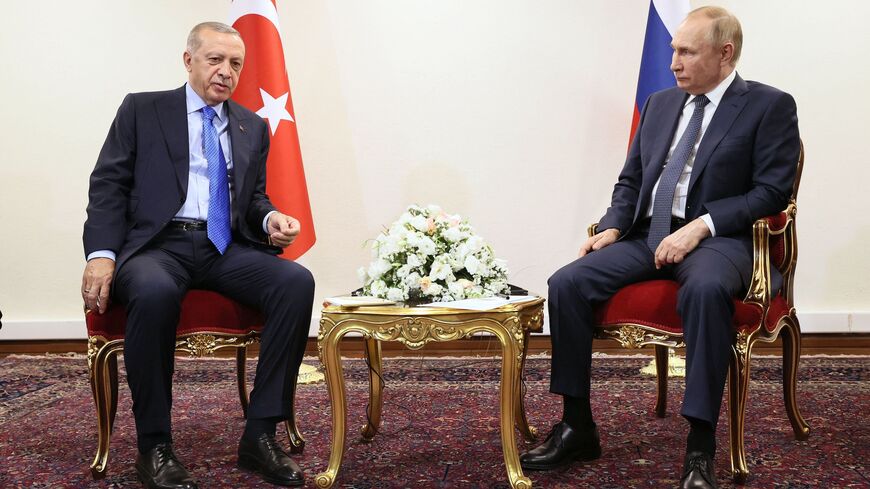 Recent opinion polls consistently suggest that if elections were held today, Erdogan would lose in a run-off with any of the main opposition candidates being touted as potential rivals and his Justice and Development Party (AKP) would lose its parliamentary majority. As its invasion of Ukraine lurches from bad to horrible and international sanctions start to bite, Erdogan’s friendship is growing ever more important for Putin, multiple commentators say. While the conventional wisdom among many Western observers is that Erdogan is unlikely to lose or let himself lose parliamentary and presidential elections that are due to be held concurrently by June 2023, the mere possibility that he might is unsettling for Putin.

There are several reasons for this. Most immediately, Turkey’s refusal to join in Western sanctions against Russia over Ukraine has thrown a lifeline to the Kremlin. Turkish skies remain open to Russian carriers and its doors to hundreds of thousands of Russians and their money, despite finger-wagging by senior US officials over serving as a potential conduit for sanctions evasion.

On the diplomatic stage, Erdogan has used the conflict to burnish his credentials as the sole leader with a foot in NATO who can talk to Putin, sell Ukraine killer drones and deliver concrete results all around.

Yet however much Erdogan presents himself as a friend to Ukraine and Russia alike, his “half-hearted effort to balance between Ukraine and Russia on the war is relatively more favorable to Russia,” said Chris Miller, a professor at the Fletcher School for Diplomacy and director of the Foreign Policy Research Institute’s Eurasia program who specializes in Russian affairs.

Even as Erdogan helped broker a deal allowing Ukrainian grain to reach world markets, he drove through concessions for Russia that lets it export its own grain and fertilizers with much of the former being bought by Turkey. “If the Russians had been negotiating themselves they may not have secured as good a result,” said Aydin Sezer, a former Turkish Treasury official who served in Moscow and closely follows the Kremlin’s ties with Ankara. Meanwhile, Ankara has looked the other way as Russia ships stolen grain out of Ukraine, prompting howls of protest from Kyiv.

In recent weeks, Erdogan’s pro-Russian tilt has grown more pronounced, at least in words. At a joint news conference with Serbia’s President Aleksandar Vucic in Belgrade, Erdogan said, “I can clearly say that I do not find the attitude of the West right.” Its policies toward Russia were “based on provocation.” “Do not underestimate Russia,” he warned.

Erdogan also suggested that Russia was justified in cutting off natural gas supplies to Europe in retaliation for sanctions. "Europe is actually reaping what it sowed," Erdogan said.

In July, there were reports that Russia’s state-run Rosatom, which is building Turkey’s first nuclear power plant, had wired around $5 billion to its Turkish subsidiary, the first in a series of such transfers. The cash helped plug the gaping hole in Turkey’s foreign currency reserves, albeit for the short term, and partially covered Turkey’s own funding commitments to the troubled project, Sezer noted. “It was a gesture of support to Erdogan.”

Last month, Russia’s Central Bank said it could buy currencies of “friendly countries” like the Turkish lira, which has shed nearly 80% of its value in the past five years in part because of Erdogan’s stubborn refusal to raise interest rates on the grounds that it raises inflation. Inflation is currently sitting at more than 80%. Even his core base is starting to waver. Erdogan is desperate for all the outside help he can get.

“Rosatom injecting a significant amount of dollars in the Turkish banking system at a time that the system desperately needs dollars — these are all substantive interactions. And when you put them all together, this is a relationship that’s gotten a lot deeper than it was a decade ago, even though you still have disagreements,” Miller told Al-Monitor. “Putting dollars in Turkish banks is not a move you’d make if you were motivated purely by financial metrics. So there is very clearly a willingness to spend financial capital in Turkey in the pursuit of political capital vis-a-vis Erdogan,” Miller added.

The disagreements Miller was referring to were chiefly over Syria, Libya and more recently Azerbaijan, where Turkey and Russia backed opposing sides. But the two countries have so far largely managed to compartmentalize these and focus on areas where their interests align.

“If you are sitting in the Kremlin, you’ve now had two decades with which to understand how Erdogan and the system around him operate. The system has produced mixed results for you, but on balance it’s driven a wedge between Turkey and the West, which is certainly a favorable outcome for Russia,” Miller told Al-Monitor. Turkey’s acquisition of Russian S-400 missiles and ensuing congressional sanctions prohibiting military sales to Ankara, together with its ejection from the F-35 fighter jet consortium, are among the most notable markers of that rift.

That rift looks set to widen as Congress continues to resist the sale of F-16 jets to Turkey. Erdogan is once again talking about buying elsewhere. “The United States is not alone in selling fighter jets,” Erdogan told reporters on Sept. 9. “The United Kingdom, France and Russia also sell it, and some send us [positive] signals.”

The conflict in Ukraine has carried Erdogan’s value for Putin to a new level.

As for the personal relationship between Putin and Erdogan, Sezer contends it is key.

An early “bond” was formed when the pair pushed through a long-derided project to build Blue Stream, the first pipeline carrying Russian natural gas to Turkey via the Black Sea. “Putin saw a decisive man who could cut through all the red tape, with whom he could do business,” Sezer said.

Russian oligarchs with close ties to Putin have since entered the Turkish market in a big way, as documented by investigative reporter Aytug Ozcolak for the independent broadcaster Medyascope. They include Vagit Alekperov, whose net worth is estimated at $19.8 billion and who owns 28.3% of Russian energy giant Lukoil. The company’s investments in Turkey have reportedly attained $1 billion, including 600 fuel stations, accounting for around 5% of market share. Last year Russia provided more than 45% of Turkey’s natural gas needs and says it is now willing to accept rubles in payment.

Putin would like to see Erdogan stick around “not because he has a particular thing about Erdogan specifically, but because it’s the best option for him precisely because he feels he can deal with strongmen,” said Mark Galeotti, a London-based lecturer and writer on transnational crime in Russia and director of the consultancy Mayak Intelligence. Despite the huge bumps in the relationship, notably Turkey’s downing of a Russian fighter jet in 2015 over Syria, “[Putin] doesn’t have a problem with other figures who like him strongly support their country’s national interest,” Galeotti told Al-Monitor.

This holds true even after Erdogan kept Putin waiting before a recent face to face meeting in Tehran in July. Putin was visibly thrown off as he paced awkwardly before a throng of reporters. Many interpreted this as payback for Putin humiliating Erdogan in a similar fashion when he shuffled to the Kremlin after the February 2020 debacle that saw Russian air force jets kill 34 Turkish soldiers in Syria’s Idlib. “Putin plays these spiteful mind games all the time. But the interesting thing is that Erdogan can often out-Putin Putin,” and this engenders a grudging respect, Galeoitti contended. “Putin can be annoyed at specific things, but ultimately Putin understands pragmatic strongmen being one himself and doesn’t let it get to him as he clearly does on a visceral level with Western democratic politicians whom he really doesn’t understand and whom he feels don’t really understand him,” Galeotti added.

Still for all their shared traits, Putin and Erdogan are also very much products of their own environment. “Erdogan is, all said and done, an electoral politician. He needs to win votes to stay afloat. Putin is a security services operative turned into a politician in a system that was never as democratic as Turkey," recalled Dimitar Bechev, a visiting scholar at Carnegie Europe and author of “Turkey Under Erdogan. How a Country Turned from Democracy and the West."

Yet “one-man regimes lose connection with reality over time.”

“Putin showed that in Ukraine. Erdogan is a captive of his own delusions when it comes to running Turkey's economy,” Bechev told Al-Monitor.

As Russia’s fortunes in Ukraine continue to plummet, Russia’s dependency on Turkey, and the need to curry favor with Erdogan, can only grow.

Turkey owes a fair bit of its leverage to the fact that Russia stumbled early on, argues Nicholas Danforth, a Senior Visiting Fellow at the Hellenic Foundation for European and Foreign Policy. Had Russia overrun Kyiv, “Few people would now be praising Turkey’s Bayraktars (combat drones) or mediation efforts. Instead, Erdogan would be facing a more formidable strategic environment from the Black Sea through the Caucasus to Syria, and even greater frustration in the United States and Europe,” he observed in a recent essay.

“Continued Ukrainian gains would lead Erdogan to finesse his balancing act, but his basic approach isn’t going to change,” Danforth told Al-Monitor. He will likely “capitalize on the short term benefits while trying to offset his lost leverage with the West.” This might include renewed pushes for settlements in Syria and the Caucasus on Turkey’s preferred terms, Danforth predicted.

Galeotti concurs. “Given how ruthlessly pragmatic Erdogan is, it’s a question of ‘what’s in it for me.’”

All of this begs the question of why Putin has resisted Erdogan’s requests to allow another big Turkish offensive against the Syrian Kurds. It’s because of its growing dependency on another regional power: Iran. In recent months, Iran has stepped in to fill numerous Russian needs, providing it with combat drones and other equipment while holding the fort in Syria on behalf of the Assad regime.

Iran’s Supreme Leader Ayatollah Ali Khamenei has openly opposed Turkish plans. Turkey currently controls around 10% of northern Syria, and the last thing Iran wants is for that footprint to grow.

However, as Turkish elections draw nearer, the likelihood of Putin letting Erdogan take another swat at the Syrian Kurds cannot be discounted, said Sezer, the former Treasury man.

“Even if the operation is more symbolic than substantive, the idea would be to help Erdogan in the polls,” Sezer said.