Israel calls on US not to delist IRGC as terror group 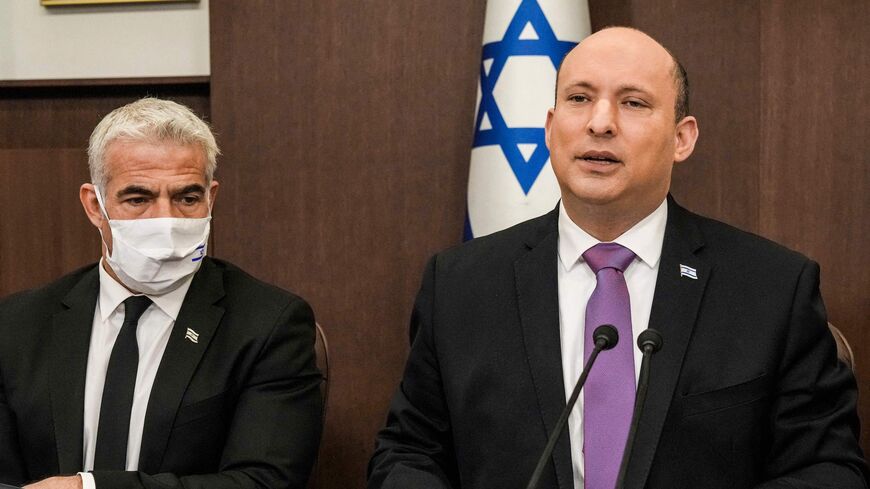 Prime Minister Naftali Bennett and Foreign Minister Yair Lapid urged the United States today not to remove Iran’s Islamic Revolutionary Guard Corps from its list of terror organizations. “The Iranian Revolutionary Guards Corps (IRGC) is a terrorist organization that has murdered thousands of people, including Americans. We refuse to believe that the United States would remove its designation as a terrorist organization,” Lapid and Bennett said in a rare joint statement that Lapid also tweeted.

They pointed out that the IRGC directs and instructs Hezbollah in Lebanon, Islamic Jihad in Gaza, the Houthis in Yemen and militias in Iraq, and that the body is responsible for attacks against American civilians and American forces throughout the Middle East, including in the past year. The IRGC has been accused of plans to assassinate senior American officials and was involved in the murder of hundreds of thousands of Syrian civilians. The statement read, “They kill Jews because they are Jews, Christians because they are Christians, and Muslims because they refuse to surrender to them."

It went on, “The attempt to delist the IRGC as a terrorist organization is an insult to the victims and would ignore documented reality supported by unequivocal evidence. We find it hard to believe that the IRGC’s designation as a terrorist organization will be removed in exchange for a promise not to harm Americans. The fight against terrorism is a global one, a shared mission of the entire world. We believe that the United States will not abandon its closest allies in exchange for empty promises from terrorists."

This is not the first time Israel has protested such reported American intentions.

Addressing the Conference of Presidents of the Major American Jewish Organizations on Feb. 20, Bennett warned against the new JCPOA being negotiated at Vienna, arguing that with the imminent deal, tens of billions of dollars will be poured “back into this apparatus of terror" and "Much of this money will be funneled towards attacking Israel.” Bennett revealed that in the ongoing negotiations, “to cap the chutzpah, Iran is demanding to delist the IRGC” as a terrorist organization. “Do you understand? They are now asking to let the biggest terror organization on earth off the hook.”

Addressing the same event on Feb. 21, Lapid warned that the administration of President Joe Biden might be open to accepting the delisting request and called on international actors to convince the White House against it. “Everyone in his right mind should talk to the administration about this and tell them, ‘This is just wrong, don’t do that.'”

On March 16, Israeli journalist Barak Ravid reported for Axios, “The Biden administration is considering removing Iran's Islamic Revolutionary Guard Corps from a terror blacklist in return for a public commitment from Iran to de-escalation in the region, three Israeli officials and two US sources tell me.” Ravid explained, “An agreement to restore the 2015 nuclear deal is nearly complete, but Iran's demand that President Biden reverse Donald Trump's decision to designate the IRGC as a Foreign Terrorist Organization is a key remaining sticking point.”

Former President Donald Trump designated the IRGC as a foreign terrorist organization on April 2019. It was the first time the United States had formally named a branch of the armed forces of a foreign government as a terrorist group. A statement issued at the time by the White House said that the unprecedented step “recognizes the reality that Iran is not only a state sponsor of terrorism, but that the IRGC actively participates in, finances, and promotes terrorism as a tool of statecraft.”