After US President Donald Trump's speech, Iranians tweeted in support of the Islamic Revolutionary Guard Corps. 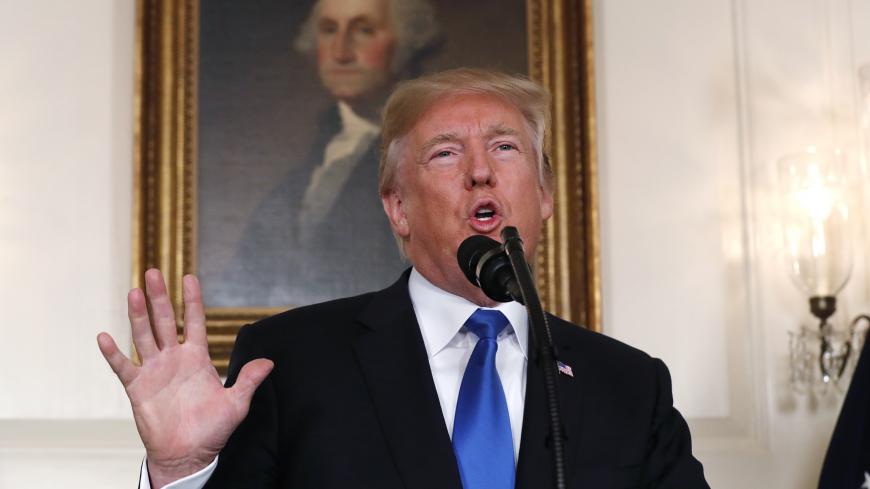 US President Donald Trump speaks about Iran and the Iran nuclear deal in front of a portrait of President George Washington in the Diplomatic Room of the White House in Washington, Oct. 13, 2017.

The popularity of Iran’s Islamic Revolutionary Guard Corps (IRGC) has spiked, at least on social media, following US President Donald Trump laying out a new strategy on Oct. 13 that increases the likelihood of not only the collapse of the nuclear deal between Iran and the six world powers, but also the likelihood of a military conflict and aggressive efforts to bring about regime change in Tehran. In the same strategy speech, Trump said he had authorized the Treasury to impose additional sanctions on the IRGC, describing it as "the Iranian Supreme Leader’s corrupt personal terror force and militia."

A day after Trump's speech from the White House, Iranian Foreign Minister Mohammad Javad Zarif tweeted, “Today, Iranians — boys, girls, men, women — are ALL IRGC; standing with those who defend us & the region against aggression and terror.” On Oct. 11, President Hassan Rouhani also addressed the IRGC and the possibility of US sanctions against them. He remarked, “If America wants to commit its next big mistake and take action against the IRGC, this is a mistake upon a mistake.”

Rouhani continued, “The IRGC is not only a military organization, but the IRGC is in the hearts of the people and has defended the nation any time there has been a danger against national interests.” He added that the IRGC is not only popular among the Iranian people, but also in Iraq, including Iraqi Kurdistan, Syria and Lebanon.

In response to Trump’s speech and Zarif’s tweet, #Love to IRGC began trending on Persian-language Twitter. “Love to IRGC is that feeling of security which is like seeing Haj Qasem [Soleimani] and his friends,” read one tweet. With the Islamic State's seizure of territory in Iraq, Iran’s neighbor to the west, Soleimani, commander of the IRGC’s Quds Force, has become one of the more popular figures in Iran, according to domestic and foreign polls, with his profile raised by his force's assistance in the battle against the extremist group.

The tweet by Zarif and the comments by Rouhani have also received some pushback. In an article in Javan, the newspaper of the IRGC, Sadegh Parsa wrote that had Zarif tweeted “[We] are all IRGC” four years ago, many of the Reformists would have disavowed him. The article went on to say that since Trump’s speech, however, “Iranians are more united than ever.” Parsa also noted that Trump is not the first US president to use threats and insults against Iran and that his policies and tone have been the norm since Jimmy Carter, who was president at the time of the 1979 Islamic Revolution.

Rouhani’s administration has not always had a positive relationship with the IRGC — and some social media users reminded the president of that fact. In a December 2014 speech, Rouhani, without mentioning the IRGC by name, criticized the “aggregation of power by one institution.” He said that with one institution having “guns, money, newspapers, websites,” there will be corruption.

The IRGC, which began as a military power parallel to the army and answerable to the supreme leader, has over the decades become an economic force, entering various industries, including construction and telecommunications. Much of its financial and construction work has been through Khatam al-Anbia Construction Headquarters, which can be loosely compared to the United States Army Corps of Engineers. 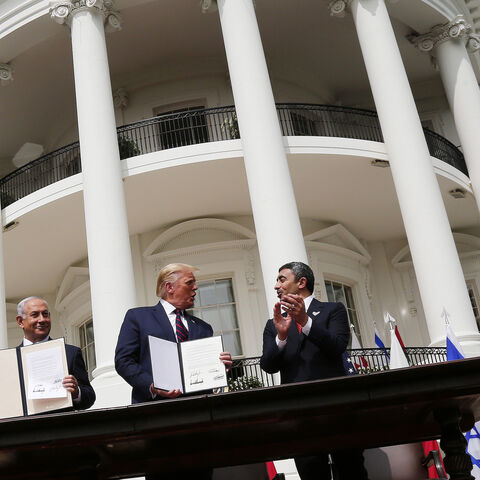