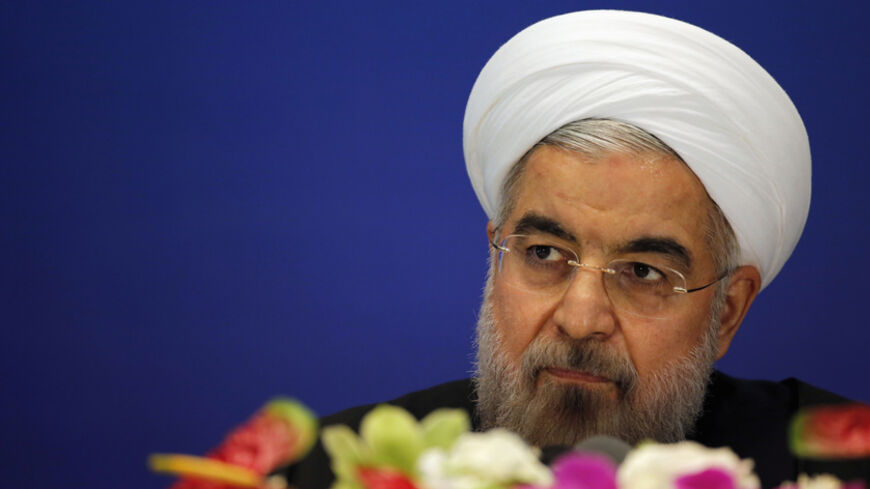 At an anti-corruption conference, Iran’s President Hassan Rouhani railed against corruption and according to many observers, took an indirect shot at the dominance of the Islamic Revolutionary Guard Corps (IRGC) in military, economic and media matters.

According to the president’s website, Rouhani recounted how in the first decade after the 1979 Islamic Revolution, when he served in parliament, they fought to bring Iran's intelligence agency under the administration and turn it into a ministry, placing the parliament in a supervisory role. He added that they pushed for the Intelligence Ministry not to be an armed one.

The intelligence agency was placed under the authority of the administration, according to Rouhani, who said, “Otherwise, if you gather the intelligence, the guns, the money, the capital, the websites, the newspapers, the news agencies under one institution, there would be corruption.”

Rouhani continued, “We have problems. We have to solve the problems. The consolidation of power in one place creates corruption.” He asked, “Why did they create three branches; why was it necessary? The separation of branches is to control power.”

Rouhani said that even the position of the supreme leader, who he called a “just leader” and “the highest authority in our country,” has a supervisory body called the Assembly of Experts, which was created during former Supreme Leader Ayatollah Ruhollah Khomeini’s time. Rouhani asked, “Why did the constitution do this, and this during Imam [Khomeini’s] time? Because any power that does not have supervision will have problems.”

A number of Persian-language news websites outside of Iran, including BBC Persian, Radio Farda and Deutche Welle, construed Rouhani’s comments as directed at the IRGC.

The IRGC answers directly to Supreme Leader Ayatollah Ali Khamenei. The body played a major role in the Iran-Iraq war and as a result of its construction projects undertaken during that era, wields considerable influence on economic projects today, particularly through its consortium Khatam al Anbia. Many websites and some newspapers are also believed to have close ties to the IRGC and their reporting reflects that relationship.

Rouhani’s administration and the IRGC have had points of disagreement since he took office in August 2013 and have been indirectly critical of one another on security and economic issues. Just last week, IRGC commander Maj. Gen. Mohammad Ali Jafari indirectly admonished Foreign Minister Mohammad Javad Zarif for saying that Iran’s security has been maintained through negotiations, rather than Iran’s military and defensive capabilities.

Ayatollah Khamenei criticized the conference where Rouhani spoke, called the “Conference for the promotion of healthy administration and the fight against corruption.” Iran’s Vice President Eshag Jahangiri had invited the supreme leader to either address the gathering or send a message to be read before the conference began.

Khamenei’s office sent a letter, which was also published on Khamenei.ir, read, “I praise the efforts of the officials, but what miracle is this conference and others like it supposed to accomplish? Are the responsibilities of the officials from the three branches not clear?”

The letter continued, “Why are firm and fundamental steps not taken so that everyone can see their tangible results? My expectation of the officials is that, with or without conferences, firm and doable decisions [should] be made … and acted upon.”