Critics warn that the US administration's announcement to designate Iran's Islamic Revolutionary Guard Corps a terrorist organization could escalate risks to US troops and reduce chances for future diplomacy. 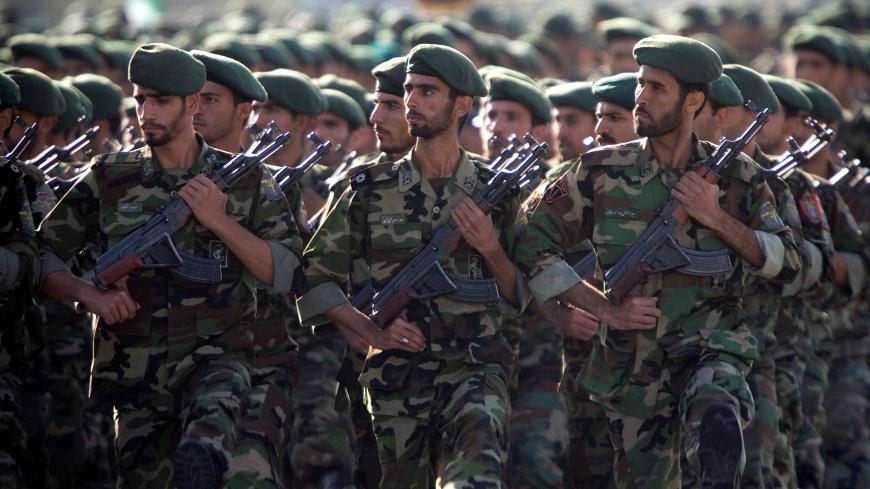 The action, due to go into effect in a week’s time, marks the first time the United States has designated a foreign government entity as a terrorist group, US officials said.

“We’re doing [it] because the Iranian regime’s use of terrorism as a tool of statecraft makes it fundamentally different from any other government,” Secretary of State Mike Pompeo said in remarks announcing the decision at the State Department today. “This historic step will deprive the world’s leading state sponsor of terror the financial means to spread misery and death around the world.”

But former US diplomats who served in the region said the designation will add little new economic pressure to Iran while potentially generating an anti-US backlash in Iraq.

“This kind of pressure can be used by pro-Iranian factions…to put their own counter-veiling pressure on Baghdad to choose Iran,” former Deputy Assistant Secretary of State for Iraq Barbara Leaf told Al-Monitor.

“Advocates can celebrate, but this will not meaningfully add to pressure and certainly meaningfully adds to risk,” Richard Nephew, a former US civil servant who played a key role in the US sanctions regime on Iran and later served as a member of the US Iran nuclear deal negotiating team, wrote on Twitter. “The real story here is the not-so-hidden-motivation: toxifying the relationship so that it is impossible to negotiate with the [Islamic Republic of Iran] in the future.”

Iran immediately denounced the decision and announced reciprocal measures. Among them, Iran’s Supreme National Security Council designated US Central Command and all the forces linked to it as a terrorist entity, Iranian media reported.

Iran’s Foreign Minister Mohammad Javad Zarif portrayed the latest US action against Iran as a gift to Israeli Prime Minister Benjamin Netanyahu on the eve of the April 9 Israeli elections.

“A misguided election-eve gift to Netanyahu,” Zarif tweeted. “A dangerous U.S. misadventure in the region.”

And indeed, Netanyahu took to Twitter to thank Trump for the latest gift, which follows Trump’s decision last week to recognize Israeli sovereignty over the Golan Heights, move the US Embassy to Jerusalem, withdraw from the Iran nuclear deal and keep mum about Netanyahu’s latest campaign promise to annex settlements in the West Bank. “Once again you are keeping the world safe from Iran aggression and terrorism,” Netanyahu wrote on Twitter.

US special envoy on Iran Brian Hook said IRGC Quds Force chief Qasem Soleimani was the true Iranian foreign minister, not Zarif. And he rejected warnings that the action could complicate any future diplomatic efforts, including trying to gain the release of US citizens believed held in Iran under the direction and control of the IRGC.

The designation “is a tool,” Hook told journalists after Pompeo’s announcement today. “Doing this will not impede our diplomacy.”

“The Middle East cannot be more stable and peaceful without weakening the IRGC,” Hook said. “It is the blunt instrument of Iran’s foreign policy, and it has been that way for decades. And what we’re doing today is … stigmatizing this organization.”

As to possible fallout to US force protection and Iraq government stability, Hook said the action was only taken after robust interagency review.

The Pentagon, which was reported to have concerns about the action and possible implications for US troop protection, said it was prepared to implement the measure.

“As a matter of policy, we do not discuss adjustments to force protection levels or measures for operational security reasons,” Pentagon spokeswoman Cmdr. Rebecca Rebarich said in a statement. “As always, DoD [Department of Defense] has taken prudent measures to ensure the safety of our forces around the world, and maintain our readiness to carry out our missions.”

Practically, the US designation of the IRGC as a foreign terrorist organization makes it a federal crime punishable by a prison sentence of up to 20 years for a US person to provide material support to the IRGC, US State Department counterterrorism coordinator Nathan Sales said.

However, the latest designation applies those prohibitions only to US persons, US trade and sanctions compliance lawyer Doug Jacobson said. “The FTO prohibitions apply only to ‘persons’ (including companies) in the US or subject to US jurisdiction,” Jacobson tweeted. “These are not secondary sanctions.”

In reality, there is little additional economic pressure to be derived from the action, but potential risks, former US Iran sanctions official and negotiator Nephew said. “We do not need to do this to maximize economic pressure on the IRGC or Iran for that matter,” Nephew, now at Columbia University, told Al-Monitor. “All the major companies and entities are not going to do business with anyone they even suspect of IRGC ties. … This decision will not meaningfully add to that pressure. We've already got the IRGC under a microscope. … How much more vigilance can be required from this?”

The theoretical added “stigma” of the IRGC from the action is outweighed by the more real potential risks, Nephew said.

“Let's say that the Iranians call the US military terrorists,” Nephew said. “Well, if you have terrorists nearby your [area of responsibility] AOR, what do you do with them? In the US system, we have authorities that authorize military operations against them. The Iranians know that. Are they going to wait to be hit? Or will they hit first?”

Nephew noted, “All of this is totally unnecessary and really dangerous as the operational parameters come out."

In Iraq, the US action could be counterproductive, by raising the pressure of pro-Iranian factions on Iraq’s government to pick Iran over the United States, and possibly lead to renewed calls by those factions to ask US military advisers to leave Iraq, said former US diplomat Leaf.

“I think Iraq is in a pretty delicate, one might almost say fragile political transition point, post-ISIS [Islamic State], with a technical government headed by a prime minister who does not have separate political following of his own,” Leaf, who headed a US provincial reconstruction team in Basra, Iraq, and later served as US ambassador to the United Arab Emirates, told Al-Monitor.

“The one thing that Iraqi leaders have been consistent in saying is that they don’t want Iraq to be a battleground between Iran and the US,” Leaf, now with the Washington Institute for Near East Policy, said. “So they don’t want to be pressured by Iran to cut ties with the US. In similar fashion, they have to maintain a good relationship with their big neighbor. So it’s a really tough balancing act."

She added, “I think we in a sense dodged a bullet recently in terms of this incipient push by the Council of Representatives to pass some sort of legislation to call for US military advisers to be expelled [from Iraq]."

“As far as impact on the Iranian regime, I don’t really see it,” Leaf noted. “The IRGC is already heavily stigmatized … There is already a great deal of caution on the part of Western firms about who they are dealing with when they look at prospective business in Iran."