The US Treasury's new Iran "humanitarian" mechanism is seen by experts as a tool to inform new sanctions on the country. 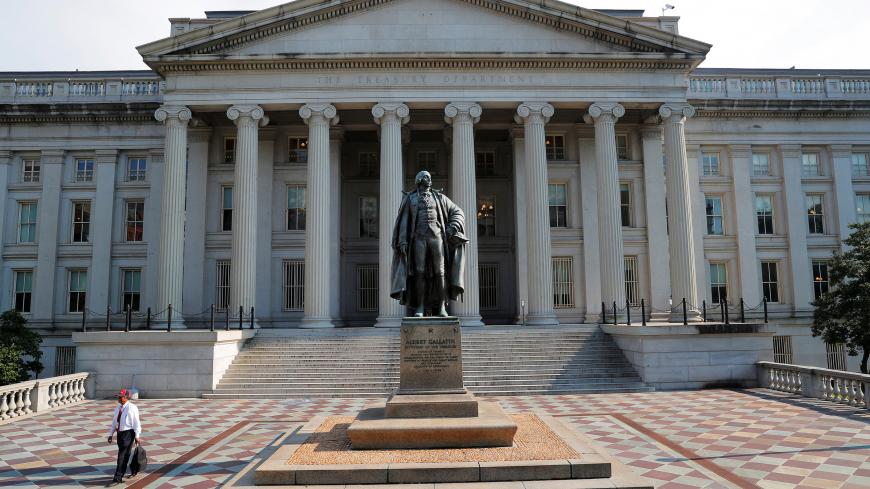 A man walks away from the US Treasury Department in Washington, US, Aug. 6, 2018. - REUTERS/Brian Snyder

WASHINGTON — Several former US government sanctions experts said a new, supposed Iran “humanitarian” transparency mechanism announced today by the Treasury Department is likely to be seen as an intelligence-gathering mechanism to inform new US sanctions rather than facilitate Iran’s purchase of food and medicine.

“This does not help, and in fact probably makes the situation worse,” Brian O’Toole, a former official at the Treasury Department’s Office of Foreign Assets Control, wrote on Twitter. “It’s like they’re trying to force Europe to scream and pound the table.”

“Today, the US Departments of the Treasury and State announced a new humanitarian mechanism to ensure unprecedented transparency into humanitarian trade with Iran,” the Treasury Department said in a press release today. “This mechanism will help the international community perform enhanced due diligence on humanitarian trade to ensure that funds associated with permissible trade in support of the Iranian people are not diverted by the Iranian regime to develop ballistic missiles, support terrorism, or finance other malign activities.”

The real story today from the Treasury announcement is the Section 311 determination, said Tyler Cullis, an attorney who specializes in sanctions law with Ferrari & Associates.

“Not a single banker in the world will look at that and say, ‘yeah, we will do that.’ Not a single one,” Cullis said, referring to the option of reporting monthly to Treasury on the special due diligence that would be required to maintain a correspondent relationship with a foreign bank that has an account on behalf of an Iranian bank.

Swiss banks have told Treasury that if it goes forward with the Section 311 finding they will terminate the accounts they maintain with Iranian banks to permit humanitarian trade, Cullis said.

Announcing the humanitarian “transparency” mechanism in the context of the Treasury determination that Iran is a primary money laundering jurisdiction will increase suspicions that it is a sanctions trap, agreed former State Department sanctions expert and Iran nuclear negotiator Richard Nephew.

“In the context of the 311 finding AND general atmosphere, I suspect most will see this mechanism less as a humanitarian channel and more as an intelligence gathering function to enable additional US sanctions,” Nephew, now with Columbia University, tweeted. “For those of us seeking a real channel, this ain’t it.”

Al-Monitor understands that the Treasury announcement spinning the 311 finding as a special humanitarian transparency measure may also be an attempt to preempt negative publicity from an anticipated forthcoming report from a human rights group on the humanitarian impact of US sanctions on Iran.

“I think this will probably have a chilling effect on the few people who are still exporting these [humanitarian] goods, especially those in Europe,” O’Toole told Al-Monitor. “It flies directly in the face of the EU blocking regulation, and could actually expose European companies trying to use this mechanism to legal jeopardy.”

“So this, coupled with the [recent] Central Bank of Iran designation under counterterrorism authorities really just adds to the complexity of making these [humanitarian] exports happen,” O’Toole, now a non-resident fellow at the Atlantic Council, said.