Experts say the US Federal Reserve is the likeliest partner for Iran because US commercial banks are still wary of ties and the Fed is well equipped to monitor authorized trade. 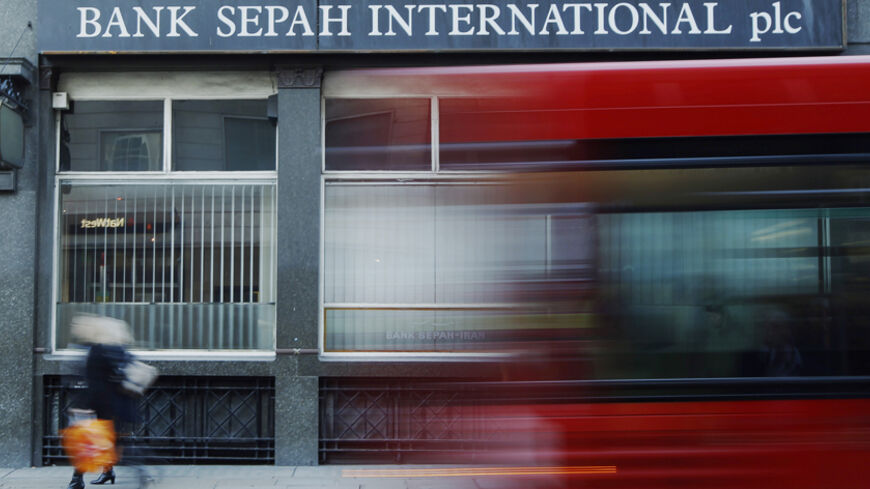 A bus passes a branch of the Iranian-owned Bank Sepah International in London, Dec. 22, 2011. - REUTERS/Luke MacGregor

As nuclear talks enter a crucial period ahead of the Nov. 24 deadline, one of the incentives the Barack Obama administration is dangling before Iran is a direct banking channel between a US and an Iranian financial institution, Al-Monitor has learned.

A former US diplomat familiar with the negotiations told Al-Monitor on condition that he not be named that such a proposal is on the table in talks between Iran and the five permanent members of the UN Security Council plus Germany (P5+1). An Iranian negotiator did not respond to a request for comment.

Cullis said the creation of what is known as a "blessed channel" would serve several important purposes.

First, it would facilitate authorized transactions between the United States and Iran, which have been stymied in the absence of a clear route for moving funds. Even though US sanctions permit the sale of food, medicine and certain communications devices, for example, US suppliers have struggled to figure out a reliable, legal way to get paid.

Personal remittances to and from Iran have also been hindered, Iranian students in the United States have had difficulty transferring funds to pay their bills and even US-based charities have been blocked in efforts to send aid to Iran. When a Boston doctor recently tried to send $100,000 to expand an orphanage in Kashan, his charity’s long-standing bank account was closed.

The second important purpose, Cullis said, is that it would send a signal to European and other foreign banks that they can resume normal operations with Iran because “the US is turning the page.”

In a policy statement issued Nov. 4, NIAC added that establishing a direct channel would have a positive impact on an overall nuclear deal by demonstrating the US commitment to relieving economic pressure on Iran in return for curbs on its nuclear program.

“A direct financial channel would help sustain a nuclear deal with Iran by ensuring that Iran receives the sanctions relief the United States pledged it at the negotiating table,” read the statement, which was shared with Al-Monitor in advance.

In the event of a nuclear deal, European and other non-US companies are far more likely to benefit initially than American businesses, most of which have been barred from trade with and investment in Iran by a 1995 executive order. Europeans have cut back on economic ties with Iran only in recent years, primarily because of US sanctions that interfered with Iran’s access to the international financial system.

Elizabeth Rosenberg, a former senior adviser to the US Treasury Department, told Al-Monitor, “I expect US persons to face quite a lot of challenges to doing business with Iran,” even if a direct banking channel is created. “It may just mean that certain foreign companies and banks are able to more easily manage transactions.”

Among the possibilities, she said, is that a dedicated channel could allow Iran to repatriate revenues from oil sales more easily. “It may involve a US node but that doesn’t mean it’s going to involve US persons investing in Iran or commercial trade” on a major scale, she said.

Under the interim nuclear agreement signed by Iran and the P5+1 a year ago, the US Treasury promised to establish a channel to facilitate both humanitarian transactions and Iranian access to some of the more than $100 billion in its oil revenues frozen in foreign accounts. The channels were only established in May and the names of the banks — said to include institutions in Japan and Switzerland — have not been made public.

It remains unclear what mechanism the Obama administration might use to establish a channel in light of presidential orders that designate a number of Iranian banks for alleged ties to proliferation of weapons of mass destruction or terrorism. Other US measures prohibit Iran from clearing transactions in US dollars or making electronic payments through the Society for Worldwide Interbank Financial Transactions, known as SWIFT.

Rosenberg, who is now a senior fellow at the Center for a New American Security, said that rather than waiving existing executive orders, Obama might simply issue a new one to license approved activities.

As for permitting the use of dollars, Rosenberg told Al-Monitor, “It seems likely that there will be a greater ability for Iran to use the US financial system … including an ability to use the dollar,” but overall removal of restrictions would be “a big deal” and are unlikely to be included in the initial stages of an agreement. She expressed a similar view about Iranian reintegration into the SWIFT system of electronic messaging, even though that will be a decision for the Europeans — who run the system — to make in coordination with the United States.

“There has to be some relief in the cards in an overall scenario” that would be phased in as Iran implements its part of an agreement, she said.

NIAC suggested that the US Federal Reserve be tasked with establishing the new channel given the reluctance of US commercial banks to resume ties.

Rosenberg agreed that the Fed would be “a more effective way to do humanitarian trade and certain narrow lines of additional business. … For reasons that you are well aware of, it’s challenging for a private [US] bank to wade into this and feel comfortable that they’re not going to be exposing themselves in any way to reputational risk or a violation of sanctions,” she said.

Some US and European banks have faced multibillion-dollar fines for sanctions infractions, and banks have been been reluctant to do business with Iran even if authorized.

Opponents of an Iran deal in the US Congress could try to block the creation of a direct channel. However, this would be “no easier than blocking any other part of the sanctions relief,” Cullis said, since Congress gave Obama authority “to generally or specifically authorize regulatory exceptions to the trade ban, including that of a direct financial channel.” Cullis added that while Congress has supervisory powers over the Federal Reserve, it does not appropriate funds for the Fed, which “complicates the extent to which Congress can block Fed action on this.”

Erich Ferrari, a lawyer in Washington who specializes in sanctions, said he doubted that Iran’s Central Bank — which is currently under US sanctions — would be the Fed’s counterpart given ongoing litigation against the Iranian institution by relatives of victims of allegedly Iran-backed terrorism.

The Central Bank of Iran has also been named by the Treasury Department as a conduit for money laundering. However, there are several Iranian private banks that have never been declared off-limits for alleged illicit activity.

The irony is that in the absence of an authorized direct channel, Americans seeking to do business with Iran have often been forced into murky means, including hawalas and other indirect systems for transferring money abroad. Among the benefits of a direct channel, beyond facilitating humanitarian transactions and keeping Iranian students in the United States from being “kicked out on the street,” Ferrari said, is that it will “shoot a big hole in the underground economy” that has come to dominate US-Iran financial transactions.