Iran not getting sanctions relief it was promised

Iran's problems getting temporary sanctions relief could increase foreign leverage to reach a longer-term nuclear deal, but decrease confidence in Iran that the present and future US administrations will be able to grant relief in exchange for nuclear concessions. 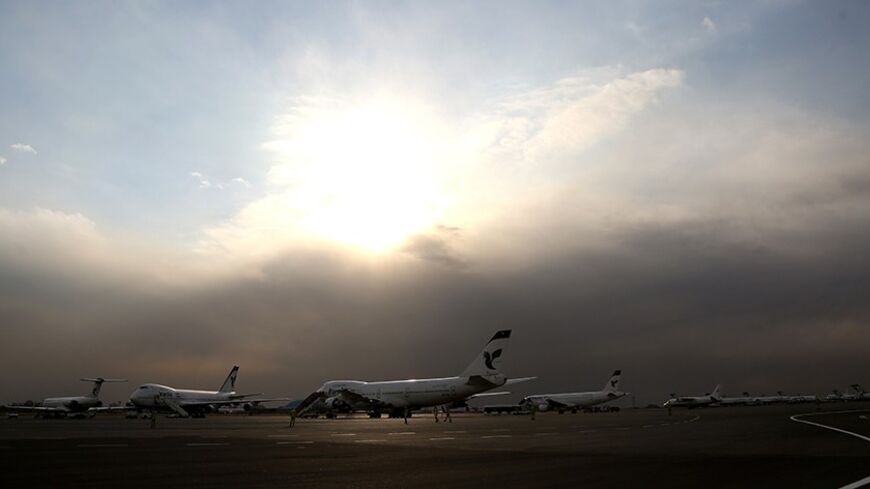 Iran is seeing less economic benefit than it was promised from an interim nuclear accord, in part because foreign companies and banks are unwilling to risk re-engaging the Islamic Republic on a short-term basis.

Al-Monitor has learned from an Iranian official, who spoke on condition that he not be named, that a major multinational company has refused an Iranian request for aircraft maintenance services — authorized by the Nov. 24 deal — on grounds that the company could not complete the work by the end of July. That’s when implementation of the interim nuclear accord is due to expire unless it is renewed by Iran and the five permanent members of the UN Security Council plus Germany (P5+1), or it is superseded by a longer-term deal. (The company is not Boeing, which recently received a license to provide spare parts and maintenance for planes sold to Iran before the 1979 revolution.)

Iran’s economy has stabilized somewhat since the interim accord was reached, but most of the benefits appear to have been psychological or have come from better management by President Hassan Rouhani’s team compared to that of former President Mahmoud Ahmadinejad. Iran’s economy contracted 3.1% from last March to last September, according to the official Islamic Republic of Iran News Agency. And while foreign trade delegations have been flocking to Tehran, they have not signed any agreements that could violate US-led sanctions.

There have been increasing reports that Iran is having difficulty completing even those transactions authorized by the Nov. 24 agreement, in large part because banks remain reluctant to conduct transactions with any Iranian financial institution — even those Iranian banks never specifically sanctioned by the US Treasury Department. The problems extend to Iran’s repatriation of frozen oil funds and the purchase of food and medicine, which was not subjected to sanctions in the first place.

These problems could increase foreign leverage on Iran to reach a longer-term deal that lifts restrictions on a more permanent basis. But they could also decrease confidence among Iranian officials that the Barack Obama administration — and its successors — will be able to implement sanctions relief in return for verifiable curbs on Iran’s nuclear program. That might encourage Iran to turn to a "Plan B" of sanctions-busting deals — such as a reported $20 billion oil swap with Russia — rather than rely on Western promises.

Suzanne Maloney, an Iran expert at the Brookings Institution, told Al-Monitor that the Iranians knew they were getting “very little” in terms of sanctions relief from the interim deal — an estimated $7 billion in total benefits. She warned, however, that the difficulties Iran is experiencing obtaining those limited resources would give “Iranians even greater trepidation about relying on sanctions relief that is based on waiver authority” in the White House.

Given Congressional hostility toward Iran, most experts believe that Obama would need to take initial steps under a long-term agreement to ease sanctions against Iran. Obama has the authority to waive many of the sanctions on the books against Iran for six months at a time — the same duration as the interim accord. However, major multinational companies need a longer-term horizon to conclude significant deals, said Maloney.

Even smaller companies may not find it worth their while to resume what was for them marginal business, she said. While Maloney said, “The heavy lift in sanctions relaxation will probably come from Europe,” under a long-term agreement, the United States will also have to take steps to ease restrictions that have made European companies reluctant to trade with or invest in Iran.

For ordinary Iranians, one of the major concerns in recent years has been the shortage of imported medicine and medical devices. Last summer, the US Treasury Department expanded the list of such items that could be sent to Iran without a license but there are continued reports that many medications are hard to find in Iranian pharmacies.

On April 4, 21 members of Congress sent a letter to the Obama administration noting “continued reports that sanctions are contributing to medicine shortages adversely impacting the people of Iran” and urging the White House to take steps to rectify the situation.

Administration officials insist that they are addressing the problem. One official who spoke to Al-Monitor on condition that he not be named said that the Treasury Department’s Office of Foreign Assets Control had sent letters to foreign banks that hold $100 billion in Iran’s frozen oil revenues and provided guidance about specific food and medical companies to which funds can be released.

“This is providing these banks sufficient comfort to release the funds,” the official insisted. “This is Government of Iran [GOI] money. Private market importers come to an arrangement with the GOI about the transfer of funds on that end to companies that provide food and medicine.”

Under the interim agreement, the United States and its negotiating partners promised to “establish a financial channel to facilitate humanitarian trade for Iran’s domestic needs using Iranian oil revenues held abroad.” However, the United States has refused to open a so-called "blessed channel" between any Iranian and American bank, meaning that any trade has to go through intermediaries.

Erich Ferrari, a Washington-based lawyer who specializes in sanctions, told Al-Monitor, “What we’re hearing from Iranians is that no one knows what this financial channel is.” Ferrari said that he was also not surprised that banks in countries still importing Iranian oil are making it hard for Iran to get access to the $4.2 billion Iran has been promised in installments under the interim accord.

A substantial portion of the deposits in UCO Bank in India are Iranian oil revenues, and they don’t want this to leave,” he said.

Marietje Schaake, a member of the European Parliament, told a Washington audience in March that most European banks are still steering clear of Iran for fear of falling afoul of US sanctions.

“It’s my understanding that most [European] banks are still hesitant to facilitate these financial transactions,” she said. “I think that is a mistake. If we agree to lift sanctions, we have to also make it practicably implementable. I’m sure there are ways that can be found even if it cannot be done through commercial institutions … to make sure that we meet our part of the commitment, which is the lifting of a small part of sanctions and facilitation of food and medicine reaching the Iranian people.”