Under terms of the deal to be implemented starting Jan. 20, the P5+1 promise to facilitate the establishment of a channel for humanitarian and other legal trade with Iran, but European banks are unlikely to rush back into relationships with Iran and US banks remain off-limits. 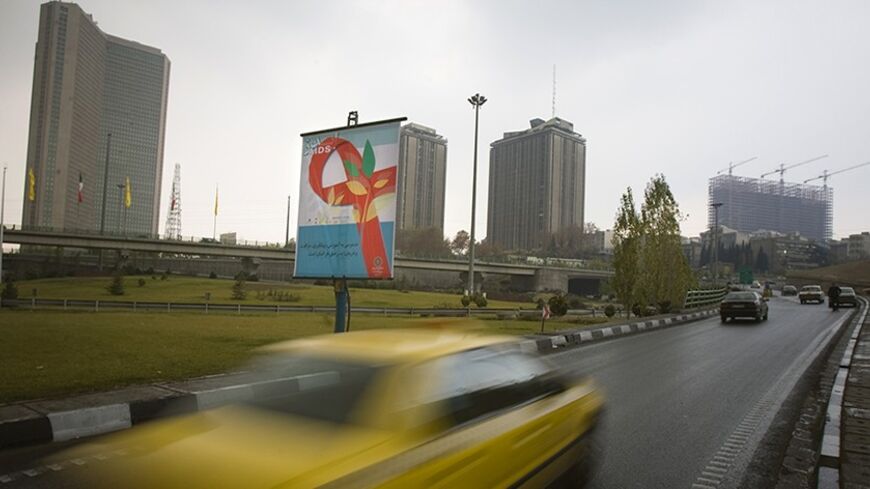 A banner with the image of a red ribbon hangs on the side of a highway in Tehran, Dec. 1, 2009. - REUTERS/Morteza Nikoubazl

The US government has promised to “provide comfort” to Western companies selling humanitarian and other allowed goods to Iran but has offered few details about how it will carry out its pledge to help establish a new “financial channel” to facilitate such transactions.

Under the terms of the Nov. 24 accord, which is to be implemented starting Jan. 20, Iran will be able to sell petrochemicals, import parts for its automotive industry and sell oil primarily to Asian countries at current reduced levels of about 1 million barrels a day. Iran will also get access to $4.2 billion in previous oil earnings bottled up in banks in importing countries, to be doled out in monthly increments starting with $550 million on Feb. 1.

But with sanctions remaining on the Iranian Central Bank and two dozen other Iranian financial institutions, it is unclear how readily Iran can use these funds to purchase Western goods and services.

A senior administration official, queried by Al-Monitor on Sunday, Jan. 12, said that Iran will not be allowed to re-establish accounts with American banks even though several Iranian banks have not been sanctioned by the US government and it is legal for American companies to sell Iran food, medicine and medical devices.

“We’ll be working to facilitate humanitarian transactions by working with the financial institutions that have funds that are available for the financing of humanitarian … transactions,” the official, who spoke on condition of anonymity, said. “We’ll be working also with the exporters to provide comfort to … all involved that these transactions are permissible, as they have been, but we’ll be redoubling our efforts to do so.”

Iran has large amounts of hard currency in banks in China, Japan, South Korea, India and Turkey, the major remaining purchasers of its oil, but has been obliged in recent years to spend the money locally. Iranians seeking to import medicine, for example, from Western countries have experienced difficulties finding legal channels to pay for such imports because of US-led financial sanctions.

The US official did not say whether the Treasury’s Office for Foreign Assets Control (OFAC), which implements US sanctions, would send assurances in writing — so-called “letters of comfort” — to major European banks to accept Iranian letters of credit, something Iranian officials have requested in the past.

Michael Mann, a spokesman for the European Union, did not reply to a query on this topic.

European banks — some of which have paid heavy fines for their dealings with Iran in the past — are  unlikely to rush back into business with Iran under the terms of the interim accord, said Erich Ferrari, a Washington lawyer who specializes in sanctions issues.

“European banks don’t have correspondent relationships with Iranian banks anymore,” Ferrari told Al-Monitor. “I don’t see how [what OFAC is saying now] is any different from the guidance they have put in previously” on humanitarian transactions.

Ferrari said Iran and the five permanent members of the UN Security plus Germany, or P5+1, would have to reach a comprehensive agreement before there would be a major impact on overall Western trade with Iran.

“The comprehensive deal is where Iran is going to see real concessions,” he said. “At this point, we have only baby steps.”

The terms of implementation of the interim deal, as described by a second senior Obama administration official on Sunday, oblige the P5+1 to “facilitate the establishment of a financial channel intended to support humanitarian trade to Iran, including the supply of medical services; and to facilitate payments for UN obligations and tuition payments for Iranian students studying abroad.” The European Union has also pledged to increase the value of transactions that do not require a license, which is currently set at 100,000 Euros ($135,000).

The reticence of US and European officials to flesh out these promises may reflect caution about exposing financial institutions to reputational risk or lawsuits.

According to Ferrari, any banks that return to the Iranian market face scrutiny from New York state regulators, since foreign banks typically have correspondent relationships with New York banks.

For now, the Obama administration’s focus appears to be on staving off new sanctions against Iran. President Barack Obama has threatened to veto a sanctions bill that has attracted 59 co-sponsors in the Senate, arguing that it would violate the interim accord, split the international community and put the prospects for negotiating a comprehensive deal at risk.

Adam Sharon, a spokesman for Sen. Robert Menendez (D-NJ), a principle sponsor of the bill and the chairman of the Senate Foreign Relations Committee, told Al-Monitor on Monday that sponsors are waiting to hear from Majority Leader Harry Reid on whether he will bring the legislation to the floor of the Senate for a vote. Reid’s office did not reply to a request for comment.