President Donald Trump’s new Iran sanctions are largely redundant, but they could tie a future president’s hand on reentering the nuclear deal and cut off humanitarian trade. 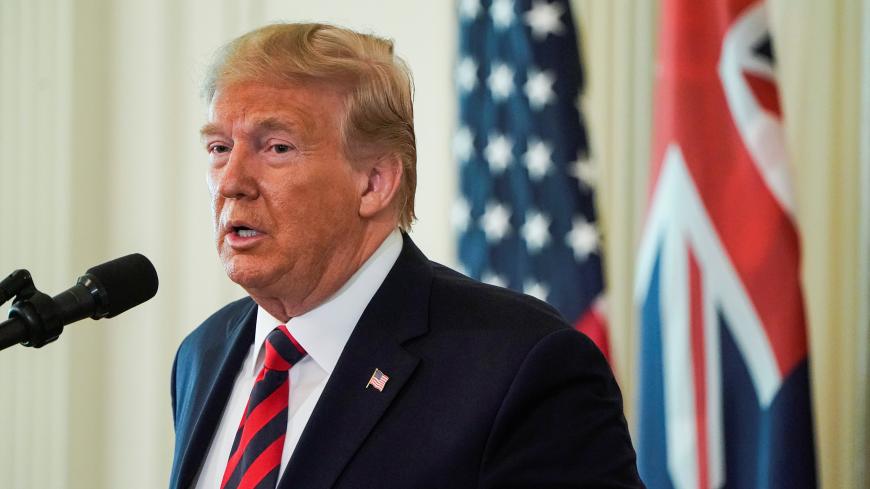 US President Donald Trump addresses a joint news conference with Australia’s Prime Minister Scott Morrison in the East Room of the White House in Washington, US, Sept. 20, 2019. - REUTERS/Joshua Roberts

President Donald Trump slapped more sanctions on Iran today, claiming they constitute the “highest sanctions ever imposed on a country.”

Trump had threatened the sanctions earlier this week after the United States accused Iran of launching the attack on two Saudi oil facilities on Saturday — charges Tehran denies. The sanctions target Iran’s central bank and its sovereign wealth fund for providing financial support to the Islamic Revolutionary Guard Corps’ Quds Force and its Lebanese proxy, Hezbollah.

Although Congress first slapped sanctions on Iran’s central bank in 2011, the additional designation under the Treasury Department’s counterterrorism authority could set up political roadblocks for the majority of Democratic presidential candidates who have vowed to lift sanctions and reenter the nuclear deal. Today’s sanctions could also severely undermine the last vestiges of humanitarian trade with Iran.

“Opponents [of the nuclear deal] are trying to box in a future president from lifting sanctions,” Tyler Cullis, a sanctions lawyer at Ferrari & Associates, told Al-Monitor. “They’re setting up to hit you hard if you do it. And there’s no way to get a better Iran policy and reenter the deal unless you can lift those sanctions.”

Mark Dubowitz, the chief executive at the hawkish Foundation for Defense of Democracies, had first recommended that Trump instate today’s sanctions as part of an “Iran sanctions wall” in an April Wall Street Journal op-ed.

“New central bank sanctions based solely on terrorism would be more difficult for a future president to remove,” wrote Dubowitz. “Though the Obama administration opposed the 2011 sanctions, they had bipartisan support in Congress and passed 100-0 in the Senate.”

The aim of the so-called sanctions wall is to prevent a future Democratic president from reentering the deal by making it as politically unpalatable as possible to lift sanctions. Since today’s sanctions target the central bank under counterterrorism authority, doing so would open future presidents up to charges that they are allowing Iran to finance its various proxies throughout the region.

After today’s sanctions announcement, Dubowitz tweeted, “A new president could try and lift the designation of the central bank and reenter the [nuclear deal], but the market would remain hesitant to engage with a bank still financing terrorism, proliferation, etc.”

Dubowitz also noted today’s sanctions on Iran’s sovereign wealth funds will force Tehran to “scramble to move” money out of its accounts abroad.

The latest batch of sanctions come as the European Union struggles to salvage the nuclear deal by setting up the long-delayed INSTEX trade mechanism intended to facilitate the sale of humanitarian goods to Iran. Today’s sanctions could also complicate European efforts to set up INSTEX and provide food and medicine to Iran as Tehran continues to ramp up its violations of the nuclear deal.

“All this does is target the Iranian people and the EU (via Instex) for Iran’s involvement in the KSA [Saudi Arabia] attack,” tweeted Brian O’Toole, who oversaw Treasury Department sanctions in the Barack Obama administration.

Designating the central bank under the Treasury Department’s counterterrorism authority has effectively curbed foreign banks’ ability to sell food and medicine to Iran.

“There is an exception for a foreign bank for dealing with the [central bank] if it involves agricultural commodities, medicine or medical devices,” said Cullis. “There is no similar exception for financial institutions designated under US counterterrorism authority.”

And while lawmakers have routinely included a humanitarian exemption in Congress’ myriad Iran sanctions bills, the 2011 law that first sanctioned the central bank contained no such exception.

“We brought this up with members of Congress because they are not aware of this issue,” said Cullis. “If you talk to someone on the Hill, they will say there are exceptions. They don’t realize they didn’t do it for that one bill, and that one bill is just swallowing the exceptions.”

But even as the humanitarian exception seems set to dissipate, the Treasury Department’s announcement today noted that the Trump administration “will continue to consider requests related to humanitarian trade with Iran as appropriate.”

The Trump administration also sanctioned Tehran’s Parsian Bank last year, which had previously served as another facilitator of agricultural and medical imports into Iran.

Nevertheless, today’s sanctions could give Trump an off-ramp to avoid the retaliatory strikes against Iran, which some hawks favor. And while the Pentagon is drawing up military options for Trump, he appeared to shy away from a kinetic response in remarks to the press today.

“I think the strong person’s approach, and the thing that does show strength, would be showing a little bit of restraint,” said Trump. Still, he also stressed that there’s still “plenty of time” for a military option.

Trump has previously sought to negotiate with Iran at the United Nations General Assembly next week — offers which Tehran has so far shot down on account of the bruising sanctions.