Intel: How partisan battle lines over US Iran policy are shaping up 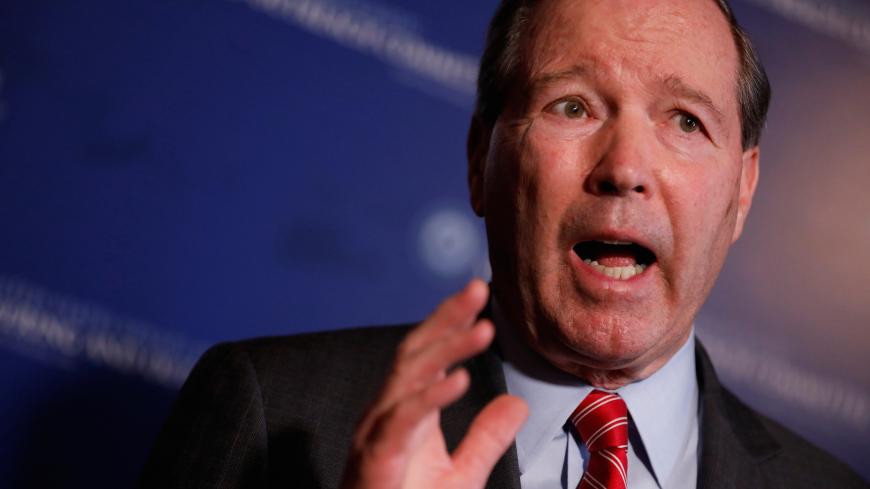 Sen. Tom Udall, D-N.M., speaks at a press conference on the need for increased government transparency at the Capitol in Washington, March 15, 2017. - REUTERS/Aaron P. Bernstein

Twelve senators introduced legislation on Thursday that would ban the Donald Trump administration from attacking Iran without congressional approval. The bill, introduced by Sen. Tom Udall, D-N.M., with the support of Minority Whip Dick Durbin, D-Ill., and 2020 presidential candidate Bernie Sanders, I-Vt., boasts the support of one Republican: Sen. Rand Paul of Kentucky.

Why it matters:  The bill, which mirrors legislation Udall first introduced in September, marks the latest salvo in the increasingly partisan battle over the future of US Iran policy. The liberal lobbying group J Street immediately endorsed the legislation, arguing that “the Trump administration’s destructive approach is alienating key US allies and courting disaster.”

The bill is unlikely to gain much bipartisan support, given that Udall and Durbin accused the Trump administration of agitating for war with Iran in a Washington Post op-ed last month. With Democrats in control of the House, however, it could pass at least one chamber of Congress and spark a debate over Iran policy ahead of the 2020 elections.

“While Iran is no innocent actor, the Trump administration’s policies and pronouncements have only increased tensions in the region,” the senators wrote. “Ever since President Trump churlishly withdrew from the Iran nuclear deal, the president has engaged in saber-rattling rhetoric meant to accelerate hostility.”

Indeed, the US administration has hinted at more sanctions ahead of the first anniversary of its withdrawal from the 2015 nuclear deal. And this week the State Department also revealed that the United States deems Iran responsible for 603 — or 17% — of all American deaths during the invasion of Iraq, adding to the popular opprobrium against Tehran.

Republicans are also hitting back. Shortly before Congress passed a resolution directing Trump to end US support for the Saudi-led coalition against Yemen’s Iranian-backed Houthi rebels, Rep. Mike McCaul, R-Texas — the top Republican on the House Foreign Affairs Committee — derided the legislation as “pro-Iran.”

Meanwhile, Iran hawks who are worried that a Democratic president could unravel Trump’s sanctions are also taking action.

This week, Mark Dubowitz, the CEO of the hawkish Foundation for the Defense of Democracies, wrote a Wall Street Journal op-ed calling on the Trump administration to build a “sanctions wall” to safeguard them. He also called on the administration to step up sanctions against Iran’s Central Bank and designate the Islamic Revolutionary Guard Corps as a terrorist organization.

“Politically, it would be hard to make the case for dismantling these sanctions, since all evidence points to Tehran’s wrongdoing,” wrote Dubowitz. “If blocked from delivering sanctions relief to Iran, the next administration would have little choice but to wield US economic leverage and negotiate a follow-on agreement that addresses the fundamental flaws of the [nuclear deal].”

What’s next:  Look to Democrats running in 2020 to come under increasing pressure to take a stance on Iran and whether to reenter the nuclear deal, and under what conditions.