Intel: How Congress is trying to hold Saudis accountable for Khashoggi’s murder 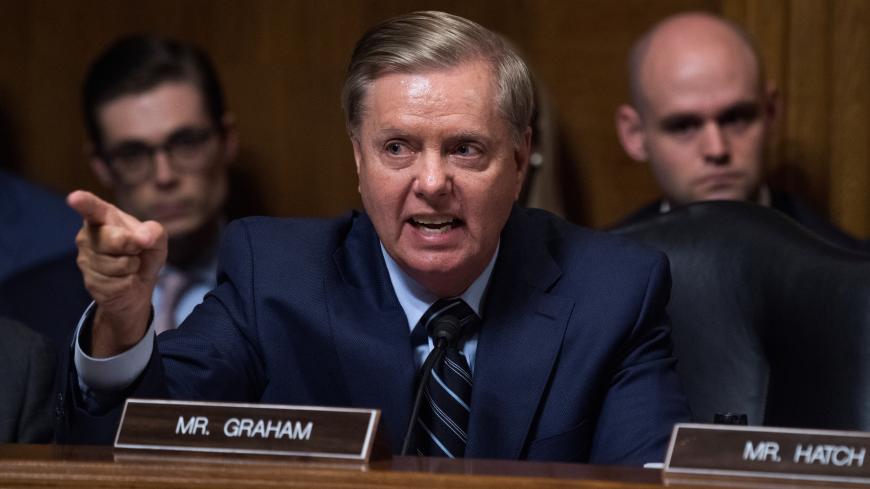 Sen. Lindsey Graham, R-S.C., defends Judge Brett Kavanaugh during the Senate Judiciary Committee hearing on his nomination be an associate justice of the Supreme Court of the United States, focusing on allegations of sexual assault by Kavanaugh against Christine Blasey Ford in the early 1980s, in Washington, DC, Sept. 27, 2018. - REUTERS/Tom Williams

The Donald Trump administration sanctioned 17 Saudi officials for killing journalist Jamal Khashoggi this week, but Congress wants to go further. Shortly after the announcement, a bipartisan group of six senators introduced legislation to sanction members of the Saudi royal family for their role in Khashoggi’s murder.

The bill also takes aim at the Saudi-led coalition’s war against Yemen’s Houthi rebels by banning US refueling of coalition planes, suspending weapons sales to Riyadh and placing sanctions on any actor — Saudi or Houthi — blocking humanitarian aid.

Why it matters: Immediately after the Trump administration announced the sanctions on Thursday, key senators from both parties said the United States needed to do more to hold Saudi Arabia accountable. The bill indirectly targets Crown Prince Mohammed bin Salman, who many lawmakers believe ordered Khashoggi’s murder, by amending a human rights law to sanction “any individual of the government of Saudi Arabia or member of the royal family” involved in the journalist’s death.

“Ending aerial refueling support of the Saudi-led coalition in Yemen and imposing sanctions on some Saudi officials who participated in the murder of US resident Jamal Khashoggi are welcome, but not sufficient,” said Reed. “Congress must demand full accountability for human rights abuses, including the murder of Jamal Khashoggi, while taking a more active role in pushing for a negotiated settlement to end the war and humanitarian crisis in Yemen.”

What’s next? Even though the Trump administration has already ended midair refueling for the Saudi-led coalition, Sens. Bernie Sanders, I-Vt., and Chris Murphy, D-Conn., have both vowed to introduce legislation this month that would go even further in ending US involvement in the war. It would end targeting assistance and possibly pull US troops away from the Saudi-Yemen border.

Know more: While this bill has the most bipartisan traction, Congress unsuccessfully tried to advance several other measures against Saudi Arabia for its role in the Yemen war this week. Read congressional correspondent Bryant Harris’ report on how House Republicans crushed a vote to end US involvement in Yemen. Then find out how the gambit by Sen. Rand Paul, R-Ky., to block an arms sale to Bahrain for its role in the Saudi coalition overwhelmingly failed in the Senate.