Bipartisan calls for a federal probe and possible sanctions against Saudi Arabia indicate that Congress has lost confidence in Riyadh. 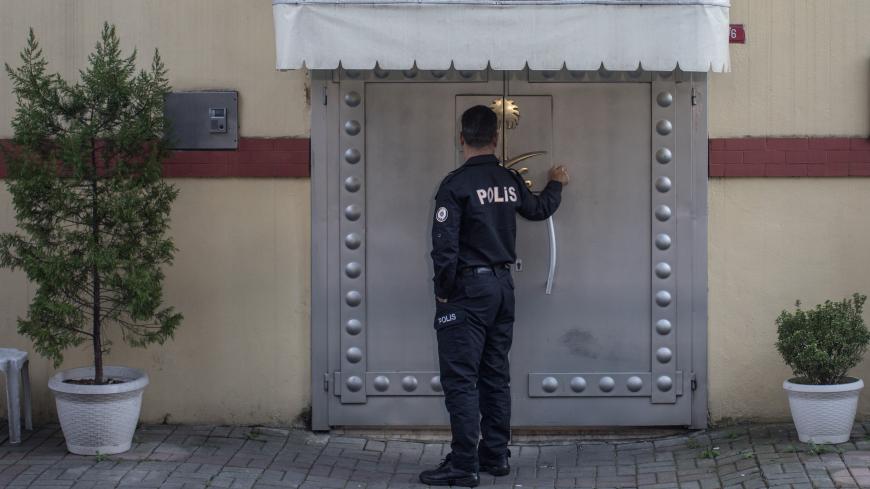 A bipartisan group of 22 senators sent a letter to President Donald Trump today demanding a federal investigation into the disappearance of Saudi journalist Jamal Khashoggi, which could lead to sanctions against senior Saudi officials.

The letter was signed by every member of the Senate Foreign Relations Committee except Rand Paul, R-Ky., who prefers an immediate end to US arms sales to the kingdom.

“The recent disappearance of Saudi journalist and Washington Post columnist Jamal Khashoggi suggests that he could be a victim of a gross violation of internationally recognized human rights,” the senators wrote in the letter.

The move comes as Saudi Arabia has increasingly alienated itself from even its staunchest allies on Capitol Hill amid a brutal war in Yemen and a crackdown on dissent under Crown Prince Mohammed bin Salman.

Under the Global Magnitsky Act, Corker and Menendez have the authority to compel the president to complete an investigation and issue possible sanctions against foreign officials for human rights violations. The administration has 120 days to comply.

A Saudi national and Washington Post columnist critical of Prince Mohammed, Khashoggi lived in exile in Virginia in Democratic Rep. Gerry Connolly’s district. After attending a rally with Khashoggi’s supporters outside the Washington Post today, Connolly told Al-Monitor that the journalist’s presumed abduction “could not have happened without the approval of the crown prince and therefore we have to have a very strong reaction.”

Others are equally dubious of Riyadh’s assertions that it was not involved. Corker recently raised Khashoggi’s disappearance with Saudi Arabia’s ambassador to the United States, Prince Khalid bin Salman, who claimed that security cameras at the Saudi Consulate in Istanbul only provide live streams and do not record footage.

“That would be quite an anomaly for an embassy or consulate not to keep video recording themselves,” Corker told Al-Monitor. “He said they’d had some technical issues. It wasn’t a very good conversation.”

Corker also noted that the Saudis arrived late for a meeting with him and Menendez.

“Menendez left, as he should have,” said Corker. “And I think they got the picture that they’re not particularly well received here right now.”

According to Turkish media, 15 Saudi intelligence officers flew to Istanbul to allegedly murder and dismember Khashoggi when he visited the Saudi Consulate there to finalize divorce papers so that he could marry his fiancee. Corker told reporters that the US intelligence he’s read corroborates some of the Turkish claims.

Graham also had uncharacteristically harsh words for the US ally today.

Notably, Graham’s former chief of staff, Andrew King, lobbies for Saudi Arabia on behalf of the Glover Park Group. Graham added that he plans to speak with the Saudi ambassador this evening.

Nine of the Republican senators now calling for an investigation, including Corker, voted against Paul’s motion last year to block an arms sale to Riyadh over its aerial campaign against Yemen’s Houthi rebels. Today, Corker said the Khashoggi incident would “definitely” affect US arms sales to Saudi Arabia.

The Yemen war had already prompted Menendez to place a hold on the sale of tens of thousands precision guided munitions to Riyadh in June. Democratic leaders in the House have also threatened to end US midair refueling support for the Saudi coalition’s anti-Houthi campaign in Yemen should they take Congress in November.

Separately today, Sens. Todd Young, R-Ill., and Jeanne Shaheen, D-N.H., led seven senators in another letter to Secretary of State Mike Pompeo criticizing him for certifying that the Saudis are endeavoring to reduce civilian casualties in Yemen despite the recent uptick of deaths. Sens. Susan Collins, R-Maine, and Jerry Moran, R-Kan., who voted against Paul’s arms hold last year, signed on to that letter.

Nonetheless, the Saudis have received ardent support from the Trump administration, enjoying a closely knit relationship with both the president and his son-in-law, Jared Kushner.

“In both calls they asked for more details and for the Saudi government to be transparent in the investigation process,” Sanders said in a statement.

And although the Washington Post reported Tuesday that US intelligence had intercepted Saudi communications discussing plans to lure Khashoggi back to Saudi Arabia and capture him, Trump has so far maintained that “I know nothing right now.” Ironically, Trump has previously used his authorities under the Global Magnitsky Act to sanction two Turkish Cabinet officials for Ankara’s ongoing detention of a US citizen.

While Corker expressed confidence in Trump’s handling of the situation, Khashoggi’s home-state lawmakers have been less charitable.

Connolly and Sen. Tim Kaine, D-Va., penned a letter to Trump on Tuesday urging him to “personally raise” the issue with the Saudis and Turks.

Kaine told Al-Monitor that the Trump administration does not “seem to be showing any sense of urgency about this.”

“They should feel the burden is on their shoulders to prove that he’s safe,” Kaine said.