Intel: How Trump’s pass for Saudis is firing up Congress 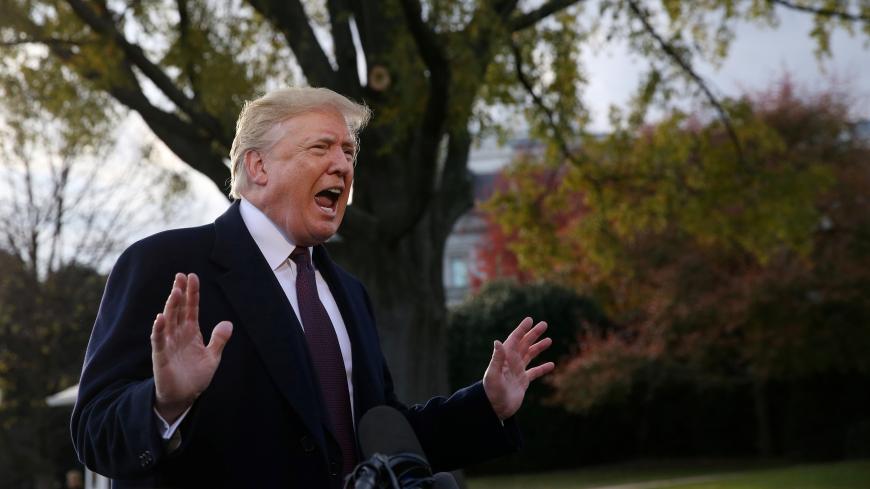 US President Donald Trump speaks to the news media while walking to board Marine One to depart for travel to Mar-a-Lago from the White House in Washington, US, Nov. 20, 2018. - REUTERS/Leah Millis

President Donald Trump is daring Congress to a face-off over Saudi Arabia’s murder of journalist Jamal Khashoggi. In a full-throated defense of the kingdom today, Trump challenged the bipartisan chorus of lawmakers zeroing in on punitive action against Riyadh, all but announcing that he would veto or otherwise seek to undercut their efforts to hold Saudi Arabia to account.

“I understand there are members of Congress, who for political or other reasons, would like to go in a different direction — and they are free to do so,” Trump said in a statement highlighting the need to ally with Saudi Arabia in his hard-line Iran strategy. “I will consider whatever ideas are presented to me, but only if they are consistent with the absolute security and safety of America.”

Why it matters: Despite Trump’s defiant statement, both Democrats and Republicans, including notable Iran hawks, have called for punitive action against Saudi Arabia — and have introduced legislation to do just that.

“In this failure of leadership from President Trump, it now falls to Congress to stand up for America’s true values and lasting interests,” Washington Post CEO Fred Ryan said in a statement.

On cue, Democratic lawmakers issued a flurry of condemnations.

“Congress will need to act where President Trump is refusing,” said Sen. Ben Cardin, D-Md., a top Democrat on the Senate Foreign Relations Committee. “We will send the right signal to the world that despite our current president, America will continue to be a beacon of justice and defender of human rights.”

The top Democrat on the House Intelligence Committee Adam Schiff, D-Calif., called for an end to US support for the Saudi-led coalition fighting in Yemen, the suspension of arms sales and a diminishment of “our reliance on Riyadh regarding other matters in the region.”

Following Trump’s statement, Shaheen called for Congress to pass the bill, stating that “President Trump’s habit of siding with murderous foreign dictators over American intelligence professionals is a stain on our democracy that undermines the American ideal.”

And Graham reiterated his call for the United States to stop supporting Crown Prince Mohammed bin Salman, even as Trump equivocates over the young leader’s implication in the murder plot despite assertions to that effect from US intelligence agencies.

“I firmly believe there will be strong bipartisan support for serious sanctions against Saudi Arabia, including appropriate members of the royal family, for this barbaric act which defied all civilized norms,” Graham said. “While Saudi Arabia is a strategic ally, the behavior of the crown prince — in multiple ways — has shown disrespect for the relationship and made him, in my view, beyond toxic.”

Know more: Congressional correspondent Bryant Harris has the low-down on what the Saudi Arabia Accountability and Yemen Act entails. And be sure to read Pentagon correspondent Jack Detsch’s report on how Trump oversells Saudi Arabia’s contributions to US defense sector jobs and revenues.