Is Trump learning to live with Iran nuclear deal?

In certifying that Iran is complying with the nuclear deal, the Trump administration appears to be discovering the merits of the accord. 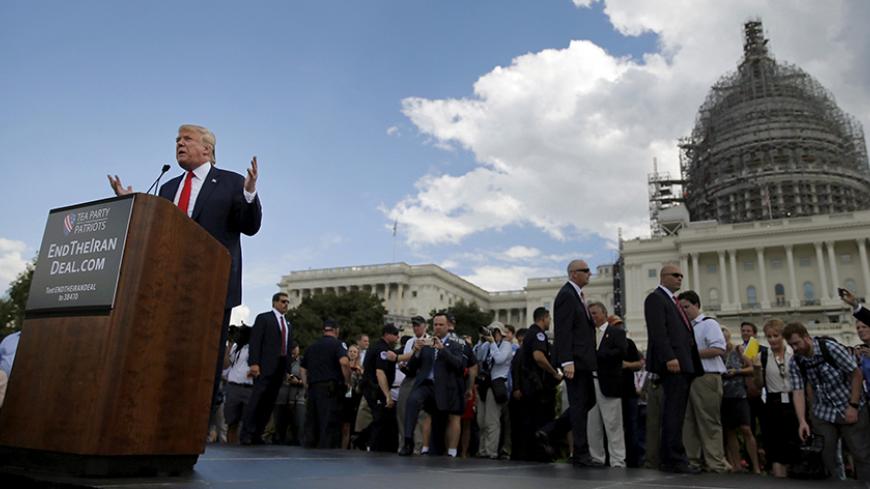 US presidential candidate Donald Trump addresses a Tea Party rally against the Iran nuclear deal at the Capitol in Washington, Sept. 9, 2015. - REUTERS/Jonathan Ernst

WASHINGTON — In a kind of reverse Dr. Strangelove, the Donald Trump administration certified to Congress April 18 that Iran is complying with the landmark nuclear deal, while saying it is undertaking a review of whether waiving the relevant US sanctions next month advances US national security interests. The action, made in a letter from US Secretary of State Rex Tillerson to Speaker of the House Paul Ryan April 18, suggests that the Trump administration may be moving unenthusiastically to uphold and enforce the Iran nuclear deal, while looking to pressure Iran on areas not covered by the nuclear accord, including Iran’s ballistic missile program, human rights and what the United States considers Iran’s destabilizing actions in the region.

While the Trump administration is conducting a comprehensive review of its Iran policy, Tillerson expressed dissatisfaction that the JCPOA does not address a long list of grievances the United States has with Iran's behavior.

"The JCPOA [Joint Comprehensive Plan of Action] fails to achieve the objective of a non-nuclear Iran," but only delays it, Tillerson said in a live statement to the press April 19. It "completely ignored all of the other serious threats Iran poses."

In grudgingly certifying that Iran is abiding by the terms of the JCPOA, the Trump administration signaled it may be coming to understand the merits of preserving the nuclear accord, at least for now, while viewing Iran as a hostile and destabilizing actor on other fronts, including in supporting the Bashar al-Assad regime in Syria, Hezbollah in Lebanon and the Houthi rebels in Yemen.

The Trump administration seems inclined to keep “JCPOA implementation, while increasing the pressure on other areas,” a European diplomat, speaking not for attribution, told Al-Monitor April 19.

“I think this is a measure of backing down,” Richard Nephew, a former member of the US Iran nuclear deal negotiating team, told Al-Monitor, referring to the Trump administration easing off campaign talk of potentially ripping up the nuclear deal, which Trump has repeatedly called the worst deal ever negotiated.

“But I also don’t see this as a victory,” Nephew, now with Columbia University, continued. “The real question is what they do on the side.” Trying to tinker with the deal, or renegotiate aspects of it, and pushing back on Iran on other fronts too hard could be damaging too, he said.

The White House said Trump had directed the National Security Council (NSC) to conduct a review within the next 90 days to determine if upholding the United States’ end of the JCPOA in terms of renewing relevant nuclear-related sanctions waivers advances US national security interests. (One set of JCPOA-related sanctions waivers, for the Iran Freedom Counterproliferation Act, expires in May. Others do not expire until June, trade lawyer Douglas Jacobson said.)

“The president is directing the National Security Council to lead an interagency review of the plan and evaluate whether suspension [of] sanctions … pursuant to the JCPOA are in the vital interests of our national security,” White House Press Secretary Sean Spicer told journalists at a press briefing April 19. “The letter clearly lays out what the president is going to do to make sure that they’re living up to their agreement.”

“As they do a review, they have had people from the intelligence community and Europe, maybe people from Asia, telling them, ‘Don’t do this. That would be bad for us for the following reasons.’ And they are willing to be swayed,” Nephew said of the Trump administration being advised by allies and internally to avoid actions that would potentially collapse the deal.

While the White House said the NSC review would determine if the United States should waive the relevant nuclear-related sanctions next month, experts said the certification made it likely the United States was planning to do so. One set of sanctions waivers expire around May 18, the day before Iran’s presidential elections, in which Iranian President Hassan Rouhani has made reaching the nuclear deal with six world powers a centerpiece of his re-election campaign.

“I think they are going to renew them,” Nephew said of the sanctions waivers. “It would be very difficult for them to now, after the [certification] today, not do the waivers.”

The certification does keep Congress from initiating its own 60-day review of whether to reimpose sanctions, experts said.

The fact that the Trump administration is laying the groundwork to uphold and strictly enforce the nuclear accord versus trying to sabotage it shows the alternatives are worse, said Iran expert Ali Vaez. But the apparent plan to look for ways to pressure Iran outside the deal is not without risk.

“Both the administration and Congress have realized that killing a deal that is working and the rest of the world is highly satisfied with would put the United States in a weaker, not stronger, position to reshape Iran’s regional policies through coercive diplomacy,” Vaez, a senior Iran expert with the International Crisis Group, told Al-Monitor. “Failing to renew the waivers will constitute a clear-cut violation of the JCPOA.”

He said, “The same calculus that brought the two sides to compromise after 13 years of standoff and two years of negotiations still holds: The alternatives to this agreement would be much worse."

Vaez warned, “The problem with the administration's emerging strategy — i.e., to keep the deal and push back Iran on other fronts — is that because of the inherent linkage between the nuclear and non-nuclear issues and the indiscriminate nature of effective sanctions, a spillover effect that erodes the JCPOA will be inevitable."

Diplomats from the United States, Iran, United Kingdom, France, Germany, Russia, China and the European Union, which comprise the Joint Commission overseeing implementation of the JCPOA, are expected to meet in Vienna April 25.