US may waive Iran sanctions in coming days

The Trump administration could issue waivers of some Iran nuclear sanctions the week of May 15 as it adheres to the nuclear deal for now while conducting a review of its Iran policy. 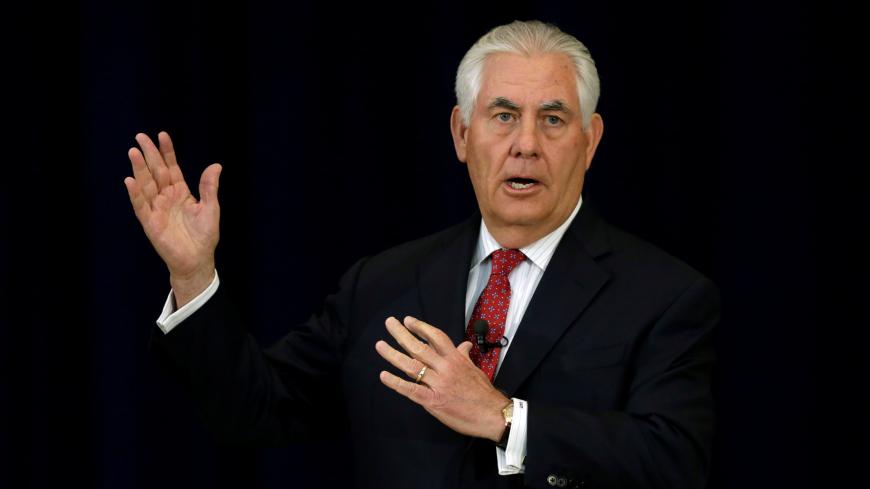 US Secretary of State Rex Tillerson delivers remarks to the employees at the State Department in Washington, May 3, 2017. - REUTERS/Yuri Gripas

WASHINGTON — The Trump administration may issue waivers of some Iran nuclear-related sanctions in the coming days as it adheres, for now, to its commitments under the Iran nuclear deal, while carrying out a comprehensive review of its Iran policy.

Notification of the waivers might be issued as early as May 17, a day before Donald Trump is due to depart for Saudi Arabia, Israel, Italy and Brussels on his first foreign trip as president, sources told Al-Monitor, while cautioning that the anticipated action and timing could change. That is also a couple of days before Iran holds presidential elections May 19.

Iranian President Hassan Rouhani has made reaching the Iran nuclear deal with six world powers a centerpiece of his re-election bid, but has come under criticism from political rivals that Iranians have not felt the economic benefits from sanctions relief that the deal promised.

The Trump administration is conducting a National Security Council-led interagency review of its broader Iran policy. US officials said that until the review is completed, the administration will continue to adhere to terms of the Iran nuclear deal, the Joint Comprehensive Plan of Action (JCPOA).

“We are continuing to review the JCPOA,” a State Department official, speaking not for attribution, told Al-Monitor. “While that review is underway, we continue to implement our commitments.”

Waivers of one set of US sanctions on Iran, under the Iran Freedom Counterproliferation Act, are set to expire 120 days after they were last issued by the Obama administration, and would need to be reissued the week of May 15 for the United States not to be in breach of the JCPOA. Waivers of some other US nuclear-related sanctions on Iran are not set to expire until after 180 days, so would not need to be reissued until a few weeks later.

"The Trump administration has made clear that at least until this review is completed, we will adhere to the JCPOA and will ensure that Iran is held strictly accountable to its requirements," the State Department official said. “Once we have finalized our conclusions, we will meet the challenges Iran poses with clarity and conviction.”

US officials have declined to offer a time line for when the interagency review of US policy on Iran and the JCPOA will be completed.

Secretary of State Rex Tillerson certified in an April 18 letter to Congress that Iran was adhering to the nuclear deal, which went into effect in January 2016, after years of negotiations.

But addressing reporters a day later, Tillerson harshly denounced Iran’s support for terrorism, the Bashar al-Assad regime in Syria and proxy groups accused of destabilizing countries in the region. The Trump administration intends to pursue a comprehensive policy toward Iran that addresses those malign behaviors, he said.

“A comprehensive Iran policy requires that we address all of the threats posed by Iran, and it is clear there are many,” Tillerson said April 19. “Whether it be assassination attempts, support of weapons of mass destruction, deploying destabilizing militias, Iran spends its treasure and time disrupting peace.”

The JCPOA “completely ignored all of the other serious threats that Iran poses,” Tillerson said.

But asked whether the United States should then break out of the deal, Tillerson said he did not think that would be constructive. “We just don’t see that that’s a prudent way to be dealing with Iran, certainly not in the context of all of their other disruptive activities,” he replied.

Trump himself took another swipe at the deal the next day.

And though his administration had just two days earlier formally certified Iran’s compliance with the deal, Trump said Iran was not living up to its “spirit.”

"They are not living up to the spirit of the agreement, I can tell you that,” Trump said. “And we are analyzing it very carefully, and we will have something to say about it in the not-too-distant future."

It was anticipated that any US sanctions waiver issued by the Trump administration this month would likely be accompanied by a similarly harsh “foot-stomping” such as those from Trump and Tillerson that followed the certification of Iranian compliance with the deal last month.

US officials are at least keeping in mind the May 19 Iranian elections, although it is unclear how much that vote might restrain the officials' comments on Iran.

Notably, Iran’s Rouhani has recently hinted in the final days of the campaign that if he wins a second term, he might be willing to pursue negotiations with the United States on issues beyond the Iran nuclear deal, to try to get non-nuclear sanctions on Iran removed.

"I will engage myself in lifting all the non-nuclear sanctions during the coming four years and bring back the grandeur of Iran and the Iranian people," Rouhani, speaking at the third and final presidential debate, said.

The Trump administration is aware of the Iranian political calendar, former US Iran nuclear negotiator Richard Nephew said. But it is still likely to accompany any nod to Iran’s compliance with the deal with harsh rhetoric about Iran’s regional behavior.

“I think they [US officials] are sensitive to the fact that this is not a random week in May, that this is sensitive time for the Iranians politically,” Nephew, now with Columbia University, told Al-Monitor.

“I don’t think anything attached to JCPOA will get through this administration that doesn’t have some dose of the negative picture, [because of] their own internal political requirements,” he said.