The Trump administration sanctioned seven new entities for their alleged role in Iran’s ballistic missile program even as it complied with the letter of the nuclear deal. 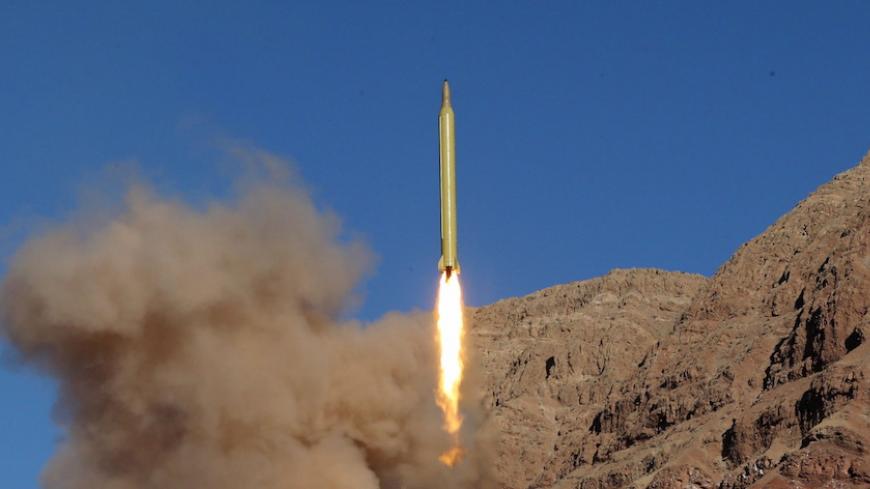 A ballistic missile is launched and tested in an undisclosed location, Iran, March 9, 2016. - REUTERS/Mahmood Hosseini

The Donald Trump administration waived nuclear-related sanctions on Iran today in accordance with the landmark nuclear deal while ripping the country over its ballistic missile program and human rights record.

In a sign of the president’s deep ambivalence toward the nuclear accord and Iran more broadly, the Treasury Department slapped sanctions on seven entities allegedly tied to the missile program, including senior Iranian defense officials and a China-based entity. Simultaneously, the State Department released a congressionally mandated semi-annual report on human rights abuses.

The nuclear sanctions waiver was widely expected after Secretary of State Rex Tillerson certified last month that Iran was complying with the Joint Comprehensive Plan of Action (JCPOA) negotiated under President Barack Obama. As Al-Monitor first predicted May 14, however, the waiver was accompanied by harsh “foot stomping” meant to convey the message that Trump is determined to keep the pressure on Iran for non-nuclear-related malfeasance.

Tellingly, news of the nuclear sanctions waiver was only mentioned in the fourth paragraph of a State Department media note titled “US State Department Issues Report on Human Rights Sanctions on Iran.” Rather than quoting Tillerson, the note quotes the department’s top Middle East envoy, Assistant Secretary of State for Near East Affairs Stuart Jones, who has reportedly told colleagues this week that he plans to resign.

The Trump administration is conducting an interagency review of US policy to Iran and whether the nuclear deal advances US national security interests, Jones said.

“As we continue to closely scrutinize Iran’s commitment to the JCPOA and develop a comprehensive Iran policy, we will continue to hold Iran accountable for its human rights abuses with new actions,” Jones said in a press release. “The US and its partners will continue to apply pressure on Iran to protect the human rights and fundamental freedoms for everyone in Iran,” he continued in the statement, which also called on Iran to release US citizens wrongfully detained or missing in Iran.

“In addition to the actions taken today, we are communicating to the US Congress that the United States continues to waive sanctions as required to continue implementing US sanctions-lifting commitments in the Joint Comprehensive Plan of Action,” the statement said.

“This ongoing review does not diminish the United States’ resolve to continue countering Iran’s destabilizing activity in the region, whether it be supporting the Assad regime, backing terrorist organizations like Hezbollah or supporting violent militias that undermine governments in Iraq and Yemen,” Jones said. “Above all, the United States will never allow the regime in Iran to acquire a nuclear weapon.”

Proponents of the deal, including members of the arms control community and former Obama administration officials who helped negotiate it, praised the Trump administration’s decision to extend, however grudgingly, the sanctions relief required under the deal. They said abiding by the deal while enforcing sanctions over Iran’s ballistic missile program and criticizing Iran’s human rights abuses is consistent with the previous administration’s approach.

“There is no material difference between what Treasury has done today … and missile designations that took place multiple times under the Obama administration,” said Richard Nephew, a former member of the US-Iran nuclear-negotiating team. Nephew made the remarks in a call hosted by Diplomacy Works, a new organization of former US diplomats and policymakers, mostly Democrats, formed to defend the deal.

“These are the kind of sanctions the Obama administration always intended would continue to be enforced,” said Nephew, who is now with the Brookings Institution. “This is not a major indication of a policy change. It is more of a status quo/continuation of what Obama was doing.”

“The Trump administration's decision to issue sanctions waivers today, as required by the nuclear deal with Iran, is a welcome and necessary step,” Kelsey Davenport, of the Arms Control Association, said in a statement.

"As long as Iran abides by its commitments, it is in the best interest of US national security [for the US] to continue [to] meet its obligations under the deal and refrain from steps that undermine the agreement,” Davenport said. She went on to warn against passage of pending sanctions legislation, S. 722, co-authored by Senate Foreign Relations Chairman Bob Corker (R-Tenn.), ranking member Ben Cardin (D-Md.) and committee member Robert Menendez (D-N.J.).

“I oppose this legislation. Categorically,” former Undersecretary of State Wendy Sherman — who led the US negotiating team at the Iran nuclear talks — said at a panel hosted by the Cato Institute on Tuesday, which included this reporter. “Why risk the JCPOA for a bill that does nothing that is going to arguably undermine the JCPOA? It is just not worth it.”

Advocates said that deal proponents should not be complacent just because the Trump administration issued these waivers.

Regarding the review of Iran policy and the JCPOA that the Trump administration is conducting, former nuclear negotiator Nephew said he understands that it is very much still underway.

“My understanding is that it is supposed to be a top to bottom review, including on the utility of the JCPOA to manage Iran’s regional behavior,” Nephew said. “There is no agreement as of yet, what’s in and out, up to and including the JCPOA.”

US officials have declined to give a timeline for when the Iran review would be complete.