After the United States placed sanctions on Iranian Foreign Minister Mohammad Javad Zarif, White House officials told the media that he was merely a propaganda chief not worth negotiating with; experts, however, said Zarif was an effective messenger for the Islamic Republic. 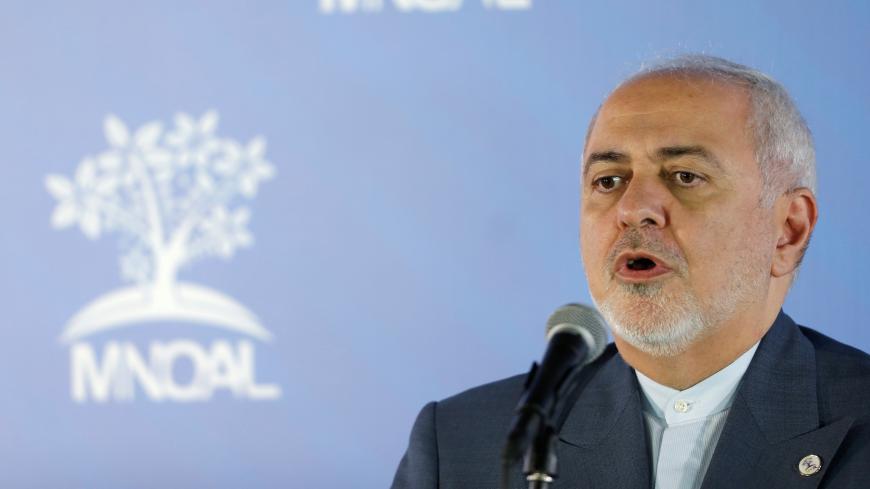 The Trump administration announced today that it is placing sanctions on Iranian Foreign Minister Mohammad Javad Zarif in a move likely to raise doubts about President Donald Trump’s oft-cited goal of negotiating a new deal with Iran and to further estrange Washington from its European allies. The designation also may boost Zarif at home.

Zarif told Al-Monitor that he was notified about the US designation while in New York, and mocked the stated US rational for the decision.

“The US’ reason for designating me is that I am Iran’s ‘primary spokesperson around the world,’” Zarif wrote on Twitter. “Is the truth really that painful? …Thank you for considering me such a huge threat to your agenda.”

Secretary of State Mike Pompeo, in a written statement, said the United States was designating Zarif under a recent executive order imposing sanctions on Iranian Supreme Leader Ayatollah Ali Khamenei and others associated with him.

US senior administration officials disputed that the designation would pose an obstacle to Trump’s claims of wanting to get to the table with Iran and said Zarif was merely a propaganda chief, and essentially not a senior enough decision-maker in the Iranian regime to bother negotiating with. Al-Monitor previously reported then that Zarif had met with Sen. Rand Paul , R-Ky., on July 18 in New York to feel out prospects for possible future talks between Iran and the United States.

“If we do have an official contact with Iran, we would want to have contact with somebody who is a significant decision-maker,” a senior administration official, speaking not for attribution, told journalists on a White House background call this afternoon.

Iran experts said the designation could help boost Zarif and shield him from attacks by hard-liners at home, even as it exposes the Trump administration Iran policy to charges of growing incoherence.

“It is basically a boost for him [Zarif] domestically because it really neutralizes a lot of the rhetoric used against him that accuses him of being too pro-American and too close to the US position,” Ali Vaez, director of the Iran program at the International Crisis Group, told Al-Monitor. “It bolsters his position domestically. Now he would be the target of US sanctions on a par with the supreme leader.”

But the US action “exposes a tension in the US administration argument, in the sense that you can’t say you are primarily interested in diplomacy with Iran, and at the same time, sanction Iran’s diplomat in chief,” Vaez said. “The other tension in the administration argument about Zarif: At the same time they say he does not matter in Iran as a decision-maker, they sanction him for being part of the supreme leader’s office.”

“It really puts the incoherence on full display,” Vaez said.

The contradictory US administration rationales for the designation also suggest frustration on the part of the Trump administration at the outcome to date of their maximum pressure campaign that has on the one hand, drastically cut Iran’s oil exports, but also led to a sharp deterioration in recent months of many of the behaviors on the nuclear and regional fronts that the Trump administration said it wanted to change when it withdrew from the Iran nuclear deal last year.

“Look, they know he is an effective messenger for Iran and that is precisely what they dislike about him,” Vaez said.

“The Zarif designation is one of the most ridiculous steps I’ve seen this Administration take,” Richard Nephew, former US sanctions expert and Iran deal negotiator, wrote on Twitter. “It won’t meaningfully affect Zarif’s diplomacy, it probably won’t result in much in terms of asset freeze or complications for him, and will annoy other world leaders.”