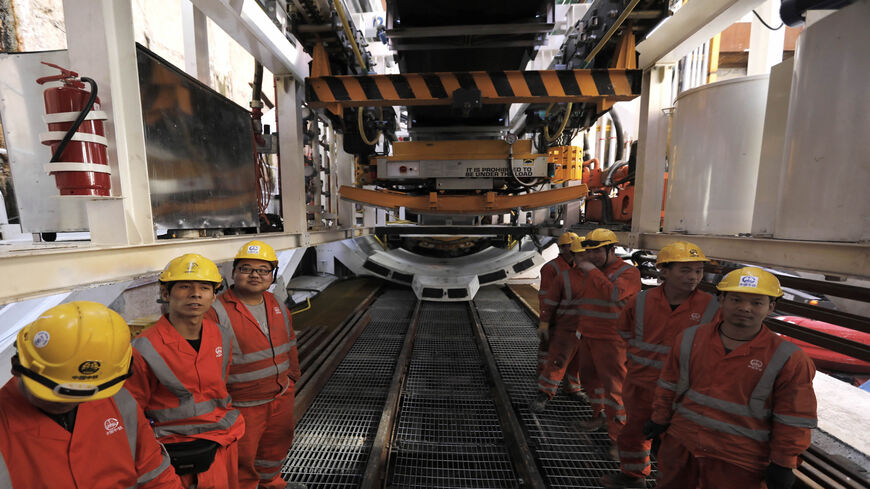 Chinese workers are seen at a construction site in Ramat Gan, east of Tel Aviv, where the first tunnel for the Tel Aviv underground subway system is being dug, Israel, Feb. 19, 2017. - Menahem Kahana/AFP via Getty Images

The Israeli government-owned NTA Metropolitan Mass Transit System released Jan. 13 the results of a tender to construct two out of five mass transit lines — the “Green Line” and the “Purple Line” in Israel’s largest metropolitan area. According to the terms of the tender, the companies that win the tender will fund, plan, build and provide maintenance for the light rail system over a period of 25 years, with construction estimated to last about five years.

It was a Public Private Partnership Tender. The two new rail lines will join the “Red Line,” which is expected to begin operating commercially late this year. They will eventually be part of a mass transit system, which carries over 200 million riders per year.

The big surprise of this tender was that none of the Chinese firms that bid on it in partnership with other companies actually won. The criteria used to select the wining companies — and not to select others — have yet to be released.

A statement by the NTA Metropolitan Mass Transit System simply said that after the hearing process took place, it decided to disqualify a proposal submitted by one group, in which the Chinese government-owned China Railway Construction Corporation (CRCC) participated. The reason for this was the especially low price that it submitted and the problems it had with tenders and business dealings in other countries. Apparently, its proposal was 1 billion Israeli shekels ($313,000) lower than the transit system’s own estimates for the cost of the project. Still, since the company’s subsidiaries are already involved in constructing the “Red Line” project, in cooperation with Israeli companies, its disqualification surprised many.

According to a senior Israeli source involved in the process, one reason for the decision was that the United States pressured Israel to avoid conducting business with Chinese companies on infrastructure projects.

Much has already appeared in Al-Monitor about growing American pressure on Israel with regard to its commercial and technological ties with China. While the government of Prime Minister Naftali Bennett and Foreign Minister Yair Lapid has introduced a certain shift of policy with regard to China (less enthusiastic then former Prime Minister Benjamin Netanyahu), it is unclear whether these are at the pace and scope that the Americans are demanding.

The issue of ties with China came up at all recent meetings between senior Israeli officials and their American counterparts.

It was raised during Bennett’s visit to Washington and his meeting with President Joe Biden last August, and again during Lapid’s visit to the United States last October. The issue also came up in all talks national security adviser Eyal Hulta and Foreign Ministry Director General Alon Ushpiz had with their American counterparts, whether in meetings in the United States or in Israel. The same thing happened during recent visits to Israel by Secretary of State Antony Blinken and national security adviser Jake Sullivan.

One of the concerns raised by the Americans, but also by some top security officials in Israel, was that the construction of one of the mass transit lines would include excavations and maintenance for electrical cables, which run in close proximity to the Israel Defense Forces headquarters in central Tel Aviv, and other defense facilities in the Tel Aviv Metropolitan area. Given this proximity, it would apparently be easy to plant sensitive listening, tracking and recording devices along the line.

Back to the Metropolitan Mass Transit System hearing. In June 2021, the United States expanded its 2018 blacklist of Chinese companies, which threaten US security. This included a ban on US citizens investing in the CRCC, because of the company’s ties to the Chinese military, its involvement in China’s military industries and its enhancement of Chinese intelligence capabilities. Obviously, the American ban put the transit system in an uncomfortable position.

That being said, the transit system hearing and further investigation revealed more troubling details. The Chinese company is suspected of numerous cases of bribery, forgery, dereliction of safety concerns and failures to meet timetables in projects around the world. No less important is the fact that the CRCC has a long history of submitting bids to tenders allegedly based on “dumping,” i.e., submitting a bid that is significantly cheaper than those of the competitors in order to ensure that it wins.

Experts claim that “dumping” is part of the policy advanced by the Chinese government, which is the CRCC’s major stockholder. It is intended to exert influence on markets around the world in general and to control the world railroad market in particular. According to reports about the company, the Chinese government provides funding in the amount of 85% of the cost of each project. This allows the CRCC to offer particularly attractive bids, especially when compared to other companies.

This is yet another component of Chinese efforts to expand the country’s influence by gaining strategic control of a chain of seaports and other modes of transportation stretching from the Far East to Europe. It does this by competing for and winning tenders to construct and operate ports, such as the new port in Haifa. As a result of this policy, there are concerns that the CRCC is submitting tenders for projects around the world at a loss, just to crush their competitors and win.

There are also suspicions of corruption involving major projects in Mexico, Australia, South Africa and other countries around the world. In 2019, the World Bank imposed sanctions on the company and its subsidiaries as a result of what was described as “fraud” in a railway tender in Georgia. The company submitted surprising cheap bids in the United States as well, raising suspicions. This included a tender to supply 284 train carriages for two lines in Boston. The bid was hundreds of millions of dollars cheaper than the competing bids.

The bottom line in this case is that the US administration won the bid, with an offer that was also unexpectedly cheap. This was apparently done to prevent Chinese companies from expanding their involvement in Israeli infrastructure projects. The increased willingness of the current Israeli government to be more responsive to American demands and investigate the Chinese offers in greater depth — all of which was reported by Al-Monitor — also contributed to the final decision.