Turkish President Recep Tayyip Erdogan revealed a scheme using Turkey’s treasury to prop up the lira, but critics point out that the move amounts to a backdoor hike in interest rates. 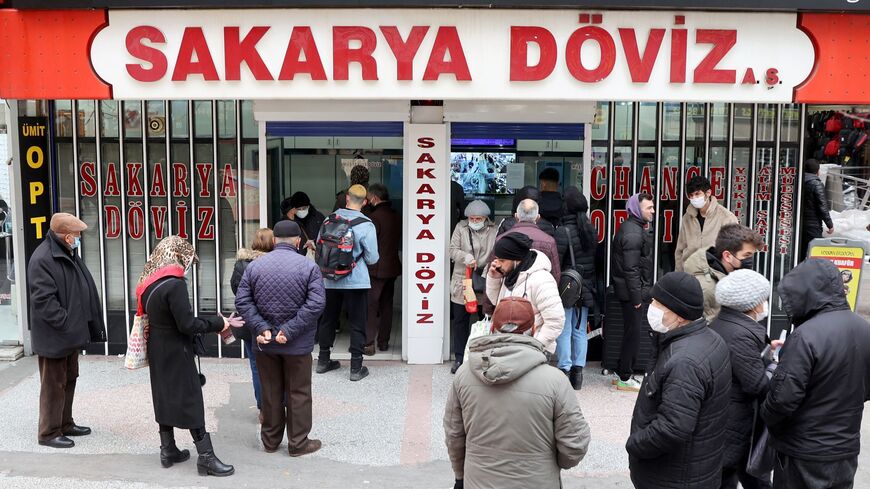 People queue outside a currency exchange shop in Sakarya Street in Ankara on Dec. 20, 2021, as Turkey's troubled lira took another nosedive. - ADEM ALTAN/AFP via Getty Images

Turkish markets continued to be gripped by volatility today despite the government’s emergency measures announced Monday to rescue Turkey’s ailing lira. The Borsa Istanbul, the country’s main stock exchange index, fell by 7.9%, triggering yet another circuit breaker. The lira swung between gains and losses after gaining as much as 20% against the dollar yesterday. Five-year credit default swaps, a bellwether of Turkey’s sovereign risk premium, continued to hover near the highest in more than a year, Reuters reported.

In what many market analysts saw as a last-ditch gamble, Turkey’s President Recep Tayyip Erdogan revealed a scheme whereby Turkey’s treasury will compensate holders of lira deposits for losses incurred should the decline in the national currency exceed interest yields. Critics point out that the move shifts the burden of Erdogan’s obsession with keeping interest rates as low as possible, which is seen as one of the main reasons the lira lost over half of its value this year, squarely onto tax payers. Moreover, it amounts to a backdoor hike in interest rates.

The greenback tumbled from highs of around 17 liras to the dollar to around 13 following the announcement of the package and was trading at around 12.59 soon after markets opened in New York.

30 years covering EM and I have never seen the FX volatility in any currency as we saw in Turkey today. Simply unbelievable. pic.twitter.com/QUPThQec1R

Wolfango Piccoli, a Turkey analyst at the London-based consultancy Teneo, said in a research note, “This huge-exchange-rate-indexed interest hike means that taxpayers will be financing the wealthy so that they will not lose on the [foreign exchange] front."

A London-based investment banker speaking not for attribution told Al-Monitor, “The initial reaction was very positive but the fact that there is no upper limit set for the deposit measure gives cause for concern as to whether the state can really guarantee everyone’s deposits."

The banker continued, “What hasn’t changed though is that the actual interest rate of the lira versus inflation is much more negative. And when you see G7 countries already moving to raise rates to combat inflation, that Turkey is moving against the tide like this means that it is more like putting a towel in the dam to stop it from bursting.”

The currency is still at unprecedented lows since the new Turkish lira was introduced versus the US dollar in 2005 and it has never been this volatile. "It is causing disaster for manufacturers, which is why the stock market is in turmoil. The key is where the exchange rate settles, if at all. If it starts going down again, Erdogan is in terrible trouble. Any move beyond 15-16 versus the dollar, and bank collapses are a real possibility and hyperinflation is still very much in the cards,” the source concluded.

The government has not indicated how the scheme will be funded, another key concern. The treasury said it would be available to individuals but not to businesses and that they would have to commit to tying down their money for a minimum of three months in order to qualify.

Erdogan is facing reelection in 2023 and the move is apparently calculated to draw deposits to the banks, which in turn can provide cheap credit and shore up growth and reduce unemployment.

Erdogan has sacked three central bank governors for resisting his demands to lower interest rates. With his credibility so sharply in question, economists doubt that he can pull it off. A lot hinges on whether Turks will be persuaded to stop accumulating dollars to protect their savings and revert to Turkish lira again.

This whole mechanism is designed to allow continued pumping of credit to support growth.

It might work for a bit but ultimately credit is inflationary AND will turn the current account positive again.

So then it won’t work and the Treasury will be on the hook.

Turkey's opposition appears to believe that the dismal state of the economy is sounding the death knell for Erdogan and his Justice and Development Party, which has governed uninterrupted since 2002. It should shake off its growing smugness, commentators warn. Erdogan continues to ignore their demands for snap polls and says parliamentary and presidential elections will be held as scheduled, giving him ample time to pull further rabbits out of his hat.

Ozer Sencar, a respected pollster, lamented in a tweet how hard it was to “draw the attention of those who highlight Erdogan’s economic failures and fail to appreciate his high skill at elections.”

Despite rising joblessness and skyrocketing prices for basics such as bread, Erdogan’s alliance with far-right nationalist leader Devlet Bahceli is, according to Sencar's Metropoll, running neck and neck with a group of opposition parties led by Kemal Kilicdaroglu and his pro-secular Republican People’s Party.

Starting with his term as mayor of Istanbul in 1994, Erdogan built up a cultlike following among millions of men and women, including nonreligious Turks and pious Kurds.

Turkish small business owners in Malatya celebrated the US Dollar’s sharp drop to Turkish lira by burning US banknotes and dancing pic.twitter.com/ujhReaK3kH

His continued appeal was in evidence today as crowds in the Kurdish-majority province of Malatya celebrated the dollar’s fall, dancing to a drumbeat and throwing dollar bills in the air as they chanted, “Let the [enemy] explode with envy, Recep Tayyip Erdogan.”