Ankara’s controversial economic policy coupled with external forces portend a continuing deprecation of the Turkish lira that will only worsen inflation and other economic parameters. 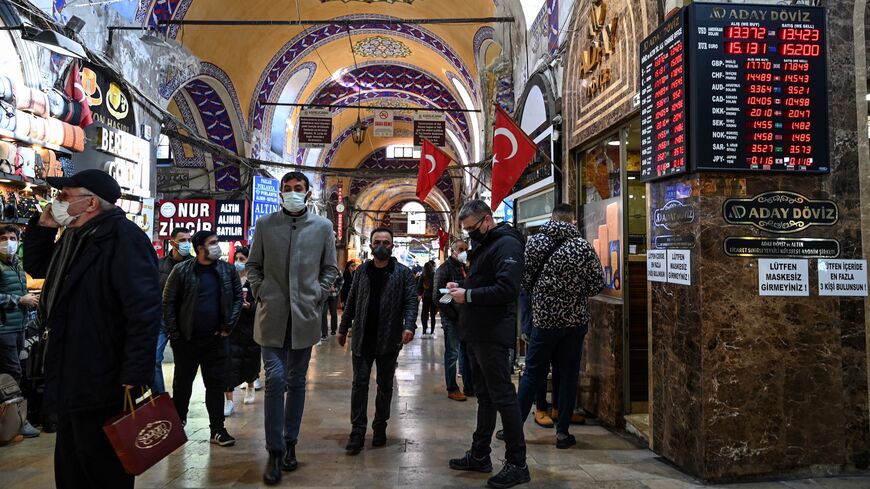 Customers wait in front of a currency exchange agency near Grand Bazaar in Istanbul, on Dec. 2, 2021. - OZAN KOSE/AFP via Getty Images

Turkey’s Central Bank lowered its policy rate by 100 basis points to 14% Thursday, delivering a fourth cut in as many months in line with President Recep Tayyip Erdogan’s unconventional view that high interest rates cause high inflation, even as prices continue to soar amid the ongoing freefall of the Turkish lira.

In a sign of deepening mistrust in Ankara’s economic management, the lira tumbled past 15 versus the dollar Thursday, hitting record lows. The currency was already in a tailspin in anticipation of the rate cut, losing some 10% of its value this week alone.

The four rate cuts since September, totaling 500 basis points, have pushed real yields deep into negative territory. Annual consumer inflation hit 21.3% in November, according to official data, which itself is widely disputed as unreliable. No matter how hard Ankara might be trying to camouflage inflation, dizzying price increases on goods such as food, automobiles and energy that have major weights in the inflation basket threaten to propel the annual consumer inflation rate to 32% in December, which would mean real yields sinking to -18% and the economy deeper into uncharted waters.

The Central Bank intervened four times in the forex market this month — apparently at the government’s behest — to prevent what it described as “unhealthy price formations,” selling an estimated $4 billion in foreign currencies, even though it has depleted its foreign reserves and come to rely on currency swaps. The interventions failed to slow the crash of the lira, but there was a glimmer of hope that the currency’s collapse might deter the bank from another rate cut.

The bank’s monetary policy committee had spoken of “limited room” for fresh rate cuts after its Nov. 18 meeting. Central Bank Governor Sahap Kavcioglu issued a similar message earlier this month, which also seemed to raise the possibility that the bank might keep rates unchanged in December. For Erdogan, however, stepping back from his obstinacy on rate cuts would have been a political fiasco. So he pressed on at the expense of dragging Turkey into utter economic uncertainty.

The unrelenting rush for dollars despite significant improvements in the industrial output and the current account balance comes as another sign of how the government’s credibility problem has worsened. Industrial production was up 8.5% annually in October, with the manufacturing output increasing some 9%, according to official data released Dec. 13. Simultaneously, the current account data showed a $3.2 billion surplus in October, driven by hard currency revenues in the tourism sector. It was the third consecutive month that Turkey posted a current account surplus, bringing its annual current account deficit down to $15 billion. The 2021 deficit had been originally projected at $21 billion.

Such macro indicators may look bright but they are of little concern for the ordinary people, who are grappling with skyrocketing prices and scrambling for hard currency to shield their savings from inflation and the devaluation of the lira.

Consumer prices are likely to increase as much as 10% in December, bringing the annual rate to 32%. The widening gap between the inflation rate and the Central Bank’s 14% policy rate would further discourage deposit holders from keeping their money in liras.

According to official data, 64.2% of all bank deposits, worth 5.4 trillion liras ($350 billion), were in foreign currencies as of Dec. 6. Deposits held by real persons amounted to 3.3 trillion liras ($210 billion), and about 65% of those savings were in foreign currencies. In other words, about 35% of deposits are still in liras, but everyone is aware that sticking to the lira means negative real yields or the melting of savings. Thus, people remain willing to transit to the dollar despite the soaring price of the greenback amid waning confidence in Erdogan’s government.

The worth of a lira tumbled to an average of 6.9 cents in mid-December, compared to 11.7 cents in September, when the Central Bank began to lower rates. This means a dreadful depreciation of 41% in four months.

More alarmingly, the future appears to hold little promise of improvement. Both the government’s approach and external financial trends portend further deprecation of the lira and thus the worsening of other economic parameters, chief among them inflation.

With US annual inflation at a four-decade high of 6.8%, the Federal Reserve is turning hawkish, planning to phase out its pandemic bond-buying stimulus faster than expected and raise interest rates three times next year. The Fed’s balance sheet has reached about $9 trillion, up from some $3.7 trillion before the pandemic. As the Fed reduces liquidity down the road, the dollar would appreciate, causing global ripples. Bracing for the impact, developing countries in particular have been hiking interest rates to defend their currencies, except for Turkey. Insisting on irrational policies, Erdogan’s government has condemned the lira to deeply negative real yields.

Erdogan hopes that lower borrowing costs will help economic growth to boost his sagging popular support ahead of elections in 2023. Yet, he refuses to recognize the extent to which the soaring prices are exasperating the populace. To ease their disgruntlement, Erdogan seems to count on the 50% hike of the minimum wage, which he took care to personally announce Thursday, shortly after the Central Bank’s rate cut. The minimum wage — the pay of more than a half of the country’s wage earners and a benchmark for the salaries of others — was raised to 4,250 liras ($275) a month for next year, yet the unruly inflation — expected to exceed 40% in the first quarter of 2022 — threatens to dampen the president’s hopes.

In sum, Erdogan may be planning to navigate the turmoil by taking greater economic risks, including the expansion of the treasury’s gaps and heightening its borrowing costs, but he will struggle to recover the credibility he has lost. The ancient wisdom that “trust, like the soul, never returns once it is gone” is truer than ever for Turkey.