Turkey’s president has received the lowest grade from consumers in his political career as his controversial economic policy is expected to further fuel inflation in the coming months. 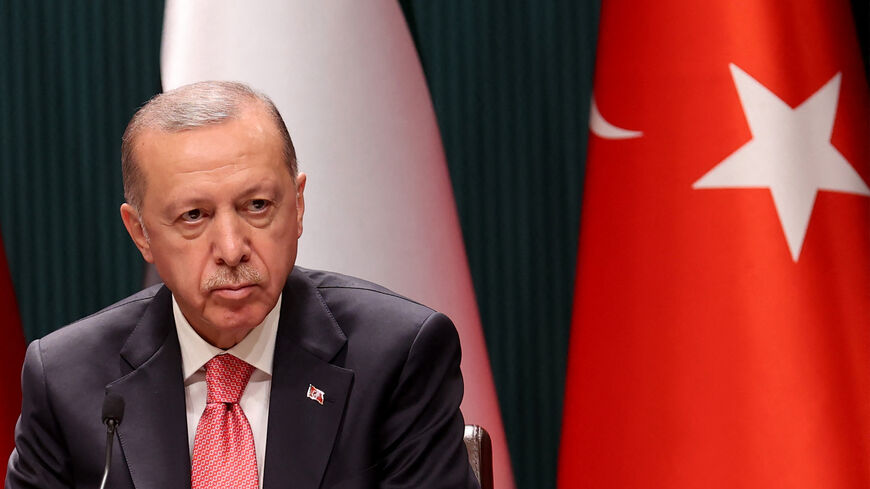 Turkish President Recep Tayyip Erdogan is facing a sharp decline in confidence in his economic management amid the chaotic economic climate he has created by pushing for lower interest rates despite high inflation and a free falling currency.

The growing mistrust is reflected in the consumer confidence index as well as the ongoing rush for hard currency, with Turks scrambling to protect the value of their money against inflation and the dramatic decline of the Turkish lira.

The consumer confidence index has plunged to its worst level since its introduction in 2004, not long after Erdogan’s Justice and Development Party came to power in November 2002. The index, produced by the Turkish Statistical Institute in collaboration with the central bank, dropped to 71.1 in November, a staggering 7.3% decrease from the previous month, according to data released Nov. 22. It is the lowest grade that Erdogan has received from consumers in his political career and a far cry from his heyday in the first half of 2004, when the readings hovered above 100.

The index, based on monthly surveys of more than 4,800 households, is measured within the range of zero to 200. A confidence level below 100 indicates a pessimistic outlook, while a reading above 100 denotes optimism. The more the index drops below the 100 mark, the more pessimism it indicates.

The index is widely seen as an indicator of confidence in Erdogan, especially in his economic management, and thus a major sign of his political fortunes. The November dip reflects a sharp deterioration in how consumers — and thus voters — appraise their own and the country’s economic prospects. The consumer confidence survey, along with a similar survey conducted among producers, serves as a basis for the composite economic confidence index.

The flight from the Turkish lira — or dollarization — is another important sign of confidence erosion, and it has only intensified in recent days.

Erdogan has been adamantly opposed to raising interest rates, which would be the conventional response to prop up the lira, as other countries have done to protect their currencies in the face of a global inflation surge. Turkey’s annual consumer inflation, stoked by the slump of the lira, reached nearly 20% in October, while producer inflation shot above 46%.

Ostensibly, Erdogan worries that higher borrowing costs would slow the economy and fuel voter disgruntlement, which is his biggest concern ahead of elections in 2023. Also, he insists on an unorthodox theory that high interest rates are the cause of high inflation. Hence, he has ignored the rising prices and the flight from the lira to push the central bank to cut rates, hoping that cheaper credit would spur the economy, even if temporarily, and reverse the downtick in his popular support.

Yet the central bank’s rate cuts, totaling 400 basis points since September, have only fueled mistrust in Erdogan’s economic management and worsened the slump of the lira. The bank’s policy rate now stands at 15%, five percentage points below consumer inflation, meaning that real yields are well into negative territory.

As a result, foreign-currency deposits have come to account for 58% of all deposits in Turkey as of mid-November. The holders of the remaining 42% are likely regretful of having stuck to the lira, with many turning to hard currency despite the skyrocketing exchange rates.

The dizzying free fall of the lira brought the price of a dollar to 10 liras in the first half of November from 9 liras only a month ago. The lira’s ensuing drop to 11 versus the greenback took just six days. The most dramatic slump, which saw the lira tumble past 12 per dollar, happened in less than 24 hours, stoked by Erdogan’s defense of his economic policy after a cabinet meeting on Nov 22.

The price of the dollar reached 11.47 liras on the evening of Nov. 22, marking a 54% increase this year and a 38% increase since September alone. In other words, the lira’s depreciation stood at 35% this year and 28% since September, when the central bank began cutting rates. The currency suffered a historic crash the following day, plummeting as much as 15% to an all-time low of 13.45 per dollar before partially regaining ground to less than 13 per dollar. It took a reprieve from its freefall Nov. 24 as the Abu Dhabi crown prince paid a fence-mending visit to Turkey, raising the prospect of Emirati investments. The two sides signed a raft of economic cooperation agreements and reportedly held preliminary talks on a currency swap deal.

With Erdogan ruling out rate hikes, there seems to be little that Ankara could do to curb the fall of the currency. The central bank has burned through its foreign reserves and pushing public banks to sell hard currency would be a very risky move, as their foreign exchange positions are not particularly strong. As for an ample inflow of foreign capital, such a prospect appears highly unlikely amid the current turmoil, which was reportedly aggravated by the flight of foreign investors.

Meanwhile, US President Joe Biden’s Nov. 22 decision to nominate Jerome Powell to head the Federal Reserve for a second term reinforced market expectations of US interest rate hikes next year, pushing the dollar index up. The yield on the benchmark 10-year US Treasury bond rose as well. The global strengthening of the dollar had a degree of accelerating impact on the fall of the Turkish lira.

Still, the headwinds denting the currency have been mainly domestic. In his Nov. 22 speech, Erdogan said he was bent on ending “the vicious circle of high interest rates and low foreign exchange rates” to stimulate investments and economic growth, dismissing the near-universal criticism of his policy. He welcomed the central bank’s rate cuts in what was widely seen as a signal of another cut in December. He said he was waging “an economic liberation war” and slammed his critics as “vassal economists.”

His remarks only fueled the criticism of the opposition, which has been calling for early elections to stop the economic meltdown. Addressing Erdogan, main opposition leader Kemal Kilicdaroglu said, “You are now a fundamental national security problem of the Republic of Turkey.”

Now everybody expects the central bank to cut rates further even though inflation is unlikely to ease. On the contrary, the surge in foreign exchange prices is expected to cause significant increases in inflation in the coming months, given the Turkish economy’s reliance on imported goods and imported energy. This would push real yields further into negative territory.

For an increasing number of people, Erdogan’s credibility loss, reflected in confidence indices and daily dollarization alike, makes the country’s governance harder by the day, the remedy of which should be early or even urgent elections rather than a mere revision of economic policy.