As Turkey’s battered lira pushes to new lows against the dollar, all eyes turn to Thursday’s central bank meeting and critical talks on the minimum wage. 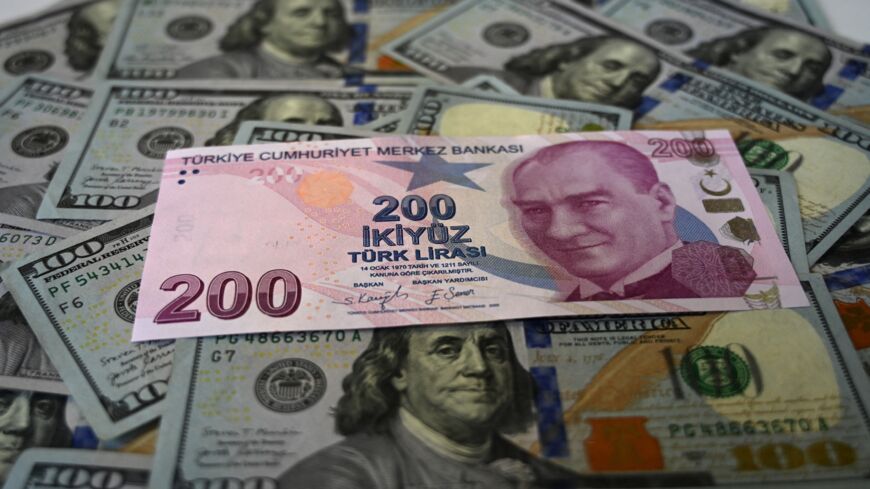 A picture taken on Dec. 7, 2021, in Istanbul shows US dollars banknotes and Turkish lira banknotes. Turkey's annual inflation rate jumped over 20% in November, official data showed on Dec. 3, 2021, after a currency crisis last month in which the Turkish lira hit record lows against the dollar. - OZAN KOSE/AFP via Getty Images

Turks woke Monday to watch their currency plunge to 14 against the dollar early in the morning, then go past it to 14.62 until noon. The fragile Turkish lira already lost more than half of its value against the dollar since the beginning of the year, 28.3% of which is in the last month. The rating agency S&P downgraded its outlook on the country to negative at the end of last week.

The central bank sold foreign exchange in the currency market Monday noon, citing “unhealthy” price formation in the market. It is the bank’s fourth intervention within a month.

The Turkish government’s economy team, which held a five-hour emergency meeting late Monday, maintained a stony silence Tuesday on key financial issues such as expected rate cuts or minimum wages for 2022. Though the expectation was to have an agreement between the government, business circles and the labor unions on the minimum wage early this week, the final meeting was quietly shelved after the meeting between President Recep Tayyip Erdogan, Finance Minister Nureddin Nebati and central bank governor Sahap Kavcioglu. The three and their teams were also joined by the directors of public banks. A cryptic statement said that the talks were on the economic situation and economic plans. No statement was made after the meeting that ended around midnight.

The opposition, however, had plenty to say in parliament where the presidential budget for 2022 was under discussion. “The daily expenses of the presidency are 59 million Turkish liras ($4 million) by day and 41,000 liras ($2,800) by minute in 2021,” said Mehmet Goker, a deputy of the center-left Republican People’s Party. “In the meantime, there are people who cannot buy bread and families who watch their income melt away. Turkish lira is worth nothing.”

Rumors in Ankara, particularly after a Reuters report, point out that the government may present an additional budget for next year because a sharp lira sell-off has strained the existing budget with pending wage hikes and other new expenditures. The parliament is expected to vote on the full budget Friday. The majority in parliament is held by the ruling Justice and Development Party and its ally, the Nationalist Movement Party, so the approval is unlikely to pose a problem.

The officials told Reuters the additional budget is expected to take into account a minimum wage hike, raises in civil servant salaries and pension payments, as well other measures to support businesses hit by the lira slide and surging inflation.

“Erdogan, who has his eyes on his popularity in the upcoming elections (scheduled for mid-2023 earliest), would probably want to make a considerable raise to the minimum salary, which is the lowest in Europe,” Murat Senol, a former banker and columnist for bankavitrini, told Al-Monitor. “But this increase would have its consequences as well, such as layoffs. His bureaucrats are probably trying to influence him right now. But like with most everything, the final decision on minimum salary would rest with Erdogan.”

The gross minimum wage in Turkey is 3,577 lira ($264) per month — the lowest in Europe. Erdogan pledged last week that he would not let Turks be “eaten up by the inflation monster,” but the government proposal of a 21% increase — as in last year — was rejected by the labor representatives. Turkey’s Confederation of Progressive Trade Unions maintains that the minimum wage for 2022 should be around 5,200 lira ($384) per month. Its members held a demonstration in front of the Labor Ministry last Sunday.

The other highlight of the week is the meeting of the central bank’s rate-setting committee on Thursday. Nureddin Nebati, Turkey’s new finance minister, said Monday that Turkey is determined “to not raise interest rates.” In a phone interview with Haberturk columnist Sevilay Yilman, Nebati was asked whether there would be further rate cuts this month. Nebati, who is not a member of the committee but has influence over the monetary authority, replied, “We are determined not to raise rates.” Many analysts in Ankara believe that there will be an additional 100 basis points cut — a prediction that is shared by the median of the estimates of 19 economists surveyed by Bloomberg.

Still a smaller group claims that  Erdogan, worried about his slipping popularity ahead of the elections in 2023, may allow a pause in the rate-cutting cycle, particularly if the lira loses more value. “It will also depend on just how much lira will plunge by Thursday noon. If it is around 14-15 range against the dollar, we might expect a rate cut,” Senol said. “If it has an even steeper fall, then a pause may be foreseen.”

Nebati, whose supportive tweets to Erdogan’s unorthodox economic policies led the opposition to portray him as a yes man, has diverged from the president by telling Yildirim that the economic difficulties were not because of external attacks but because of speculations within the country. Asked by Yildirim on the central bank interventions to the markets, he replied, “There is no attack from abroad; I say that very clearly. There are only a few manipulative, speculative transactions inside the country. The central bank is making counter-moves against those.”

To fan Turks’ conspiracy theories, a professor who is said to be a member of Erdogan’s close circle said that Turks should be ready for a state of emergency that could be declared because of the economic crisis. Izzet Ozgenc, a member of the government-affiliated Turkish Science Academy, said in a series of tweets that the ongoing loss of value of the Turkish lira against foreign currency initiated the process that will lead to a heavy economic crisis, and that, in turn, would lead to a state of emergency, or OHAL (its Turkish acronym).

"We … should be ready for the state of emergency that could be declared as a result of a heavy economic downturn," he said, citing constitutional Article 119 that empowers the Cabinet to declare a state of emergency for six months in cases of environmental disasters, infectious diseases and economic crises. OHAL gives the government extraordinary powers such as postponing elections.

The professor’s tweet and the hashtag #OHAL immediately became a trending topic. IYI Party chair Meral Aksener took it seriously enough to make a statement. “A state of emergency would cause Turkey to go bankrupt. … Don't you dare make such a move," she said.

After his tweets were retweeted thousands of times and keyboard-happy Turks made wide speculations and claims that the government was testing the ground with this statement by the professor, Ozgenc posted a second tweet, saying that his statement on OHAL was his own view, with no suggestion or guidance from anyone else.