Left out of a bill that gave doctors a raise, Turkey’s nurses and other health care workers are going on strike as Turkey reports 20,000 daily cases of COVID-19. 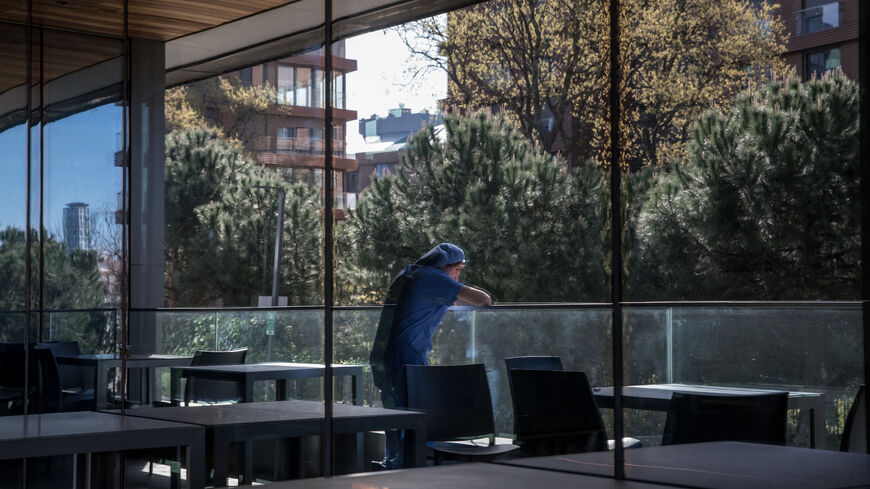 A nurse working in the COVID-19 dedicated ICU takes a break outside at the Acibadem Altunizade Hospital on April 17, 2020, in Istanbul, Turkey. - Chris McGrath/Getty Images

IZMIR, Turkey — Turkish health care workers in the Aegean coastal city of Izmir, enraged that a Dec. 1 bill raising doctors' pay ignored them, have thrown copies of their diplomas in the trash to protest what they call insufficient and discriminatory legislation.

Nurses, medical attendants, lab assistants and other health care personnel will strike throughout Turkey to protest both poor pay and harsh working conditions. Turkey logs about 20,000 new COVID-19 cases and 180 deaths daily but so far no cases of the omicron variant of COVID-19, according to Health Minister Fahrettin Koca. However, Alper Sener, a member of the country’s advisory COVID-19 board, said it was highly likely that the variant will soon be seen in Turkey.

“Particularly in those critical times, when health care workers are doing their best, it should not be forgotten that health care is teamwork, so we want improvement for all health care workers,” Omer Erdem, the communications director for Nurses and Health Care Workers Union (HEPSEN), told Al-Monitor. “While the parliament has passed legislation to improve the salaries of doctors, nurses and other health care workers, who also face and fight the pandemic, were ignored. Today, many nurses working in Turkey are on the brink of poverty.”

Heralded as heroes by President Recep Tayyip Erdogan at the beginning of the pandemic, Turkey’s doctors and other health care workers have grown increasingly frustrated with the government’s handling of the crisis, a lack of transparency in the data on infections and deaths due to COVID-19 and measures to protect health personnel. On Nov. 23, the Turkish Medical Association (TTB) organized a march from Istanbul to Ankara to protest the brutal working conditions and economic hardships. The White March warned that many medical professionals sought to leave the country where they face low salaries, long hours and violence. Doctors physically and verbally assaulted in the last 11 years number well over 100,000. At least 10 have been killed by patients.

Prodded by Koca, the government added an article to the omnibus bill to increase the salaries of doctors by 2,500-5,000 Turkish lira ($180-$360), leading health care unions such as the Health and Social Service Laborers Union (SES) and HEPSEN to announce protests. Implementation of the pay raise was shelved and Koca said that an overall improvement of health care workers will be debated at a future date, further enraging the sector.

“First we have a pay raise, then we do not. All of this is due to the Health Ministry’s failure to govern … and its tendency to take hasty steps before proper preparations,” a terse Dec. 5 statement from the TTB, calling on Koca to go before the cameras and explain whether there will be a pay raise for doctors or not. In another statement on Dec. 7, the TTB said that it backed the demands of the whole sector — not just doctors — for better pay, working conditions and pensions.

"We were told that the health care workers would also get a raise, between 750 and 1,000 Turkish lira — the equivalent of $55 to $75. We hear that it would be taken up on Dec. 22,”  Erdem said. “It is not simply a question of salary; there are many other issues from pensions to work hours.”

Many health care workers want the right to early retirement and regulations on working hours that would penalize institutions for requiring shifts beyond 14 hours.

In Istanbul, health care personnel threw away the copies of their diplomas at the dustbin at Bakirkoy Hospital. Health care workers who read out a statement in front of Capa Hospital tried to hold a rally but were prevented by the police.

“From nurses to lab workers to attendants, we work together to ensure that the people who come to hospitals get good service despite the gaps,” SES workplace representative Aydin Erol said in Istanbul. “While many people are afraid of entering hospitals during the pandemic, we fed patients with our hands. We in the sector have lost friends. We got sick but then got back to our feet and have done our duty. We were told that our contribution was priceless and, true enough, they paid nothing.”

The strikes come amid growing concern from all sectors on the state of Turkey’s economy. The Turkish lira has lost 40% of its value since the beginning of the year, 27% of it in the last three weeks. Inflation has jumped above 21%, eroding incomes and upending the budgets of many Turks.

On Dec. 7, the Minimum Wage Committee, which brings together representatives of Turkish business, labor and the government, held its second round of talks. The gross minimum wage in Turkey is 3,577 lira ($264) per month — the lowest in Europe. Erdogan pledged last week that he would not let Turks be “eaten up by the inflation monster” but the government proposal of a 21% increase — as in last year — was rejected by the labor representatives. The Confederation of Progressive Labor Unions of Turkey maintains that the minimum wage for 2022 should be around 5,200 lira ($384) per month. Its members held a demonstration in front of the Labor Ministry on Dec. 3 and announced that they will hold another Sunday.